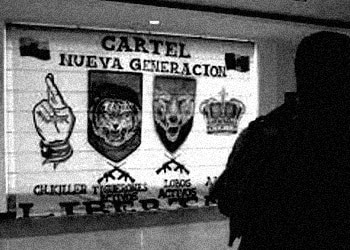 The Lobos have emerged as Ecuador’s second-largest mega-gang, with over 8,000 members spread throughout Ecuador’s prisons. The group has been involved in several devastating prison massacres in the country, which killed over 315 inmates in 2021 alone.

The deteriorating standing of the Choneros as the predominant criminal organization in Ecuador has left room for the Lobos to take control of a powerful gang federation that includes the Tiguerones and Chone Killers and to vie for control of Ecuador’s prisons from where the nation drug trade, connected to Colombian and Mexican organized crime groups, is directed.

Like many of Ecuador’s gangs, the Lobos began as a splinter group of Ecuador’s most prominent criminal group, the Choneros.

The Choneros’ principal rivals had been the Cubanos and the Lagartos, both significant prison gangs. But the deaths of both gangs’ leaders dealt a heavy blow to the organizations’ capabilities. Then, the 2020 assassination of Choneros leader Jorge Luis Zambrano, alias “Rasquiña,” left a vacuum in the leadership of Ecuador’s dominant criminal organization.

Recognizing the weakened position of the Choneros, several gangs and factions previously allied with the larger group broke ranks and forged a new alliance to battle the debilitated mega-gang. These smaller groups include the Lobos, the Chone Killers, and the Tiguerones. They refer to themselves collectively as the Nueva Generación (New Generation) in reference to their alleged but unproven links with Mexico’s Jalisco Cartel New Generation (Cartel Jalisco Nueva Generación – CJNG). According to reports, the Lobos and its allies have provided security and arms to CJNG since 2016, while the Choneros do the same for Mexico’s other major criminal group, the Sinaloa Cartel. This battle for control of Ecuador’s cocaine trafficking routes is driving much of the country’s violence.

In a significant escalation of violence, 119 prisoners were killed in prison riots in September 2021 as the Choneros, and the Lobos confronted each other at Guayaquil Litoral prison in southern Ecuador. The same year, authorities seized scores of heavy-caliber weapons in prisons controlled by the Choneros, the Lobos, and Lagartos, indicating an increased flow of weapons was entering Ecuador and ending up in the country’s prisons.

In November 2021, Ecuadorian officials blamed the Sinaloa Cartel and the CJNG for supporting the Choneros and Nueva Generación and supplying them with weapons ahead of multiple days of prison riots in which 68 inmates perished.

The violence has continued unabated throughout 2022. In April, riots broke out in the Turi prison near the southern city of Cuenca and claimed 20 lives. Alexander Quesada, alias “Ariel,” leader of the Lobos and Marcelo Anchundia, leader of a smaller rival gang, the R7, were reportedly behind the violence. The R7 had initially supported the Lobos but broke away following the souring of the leaders’ relationship.

Following the Turi riots, both Ariel and Anchundia requested transfers. They were both moved to a maximum-security prison in Guayaquil but continued to receive threats against their lives. Anchundia was moved to Bellavista prison in Santo Domingo de Los Tsáchilas, close to Quito. Ariel ordered another attempt on his rival’s life, leading to riots at Bellavista and the deaths of 44 prisoners.

Then, in November, the Lobos and their allies, the Tiguerones, were reportedly behind a wave of violence across the country, which saw police officers being killed, car bombs being set off, and bodies left hanging from bridges. These attacks were sparked by the gangs having many of their members transferred out of Guayaquil’s Litoral prison, which, they feared, would result in a loss of criminal control and income. The two gangs issued pamphlets warning of brutal reprisals if the transfers continued.

According to the Ecuadorian newspaper GK, the Lobo’s leader was Wilmer Chavarría, alias “Pipo,” who operated from the Turi prison in Cuenca. Police believe that Pipo was killed in a 2021 prison riot in which 34 inmates were murdered, though this has never been proven, GK reported.

Since Pipo’s alleged death, Alexander Quesada, alias “Ariel,” is widely considered the gang’s leader. Ariel has been described as having an aggressive demeanor, which purportedly sparked his feud with Anchundia, leader of the R7 gang.

Given his role, Ariel presumably influences the Tiguerones and Chone Killers, both strong gangs based in the northern province of Esmeraldas and the southern province of Guayas, respectively.

The Lobos operated mainly in the cities of Latacunga and Cuenca, in the Amazonian province of Pastaza, and in the coastal town of Machala, according to the local press.

However, since they began rising to prominence nationwide, the Lobos have established a strong presence in the country’s maximum-security prisons. The Lobos are reportedly in complete control of the Turi prison in Cuenca, which houses nearly 1,600 prisoners. They also have a dominant influence in the Sierra Centro and Cotopaxi prisons outside Latacunga. In Guayaquil’s Litoral prison, the largest in the country, they control wings 8 and 9, according to pamphlets published by the group in November 2022.

According to Metro Ecuador, the Lobos maintain a strong presence in smaller prisons in Cotopaxi, Tungurahua, Chimborazo, Azuay, and El Oro.

The Lobos’ primary source of income comes from moving cocaine purchased by Mexican cartels from Colombian groups through Ecuador.

Ecuador has emerged as a conveyer belt for Colombian cocaine headed to the US and Europe, with nearly a third of Colombia’s cocaine leaving South America through Ecuadorian ports. The Lobos and other Ecuadorian gangs have aided Ecuador’s augmented role in the cocaine trade.

The Lobos’ criminal activities include securing drug shipments in port cities, serving as debt collectors, and working as hired guns or killers for international partners or allied groups. In recent months, Ecuadorian authorities have discovered cocaine processing laboratories in Ecuador, indicating a possible evolution of mega-gangs like the Lobos into what authorities have dubbed “micro-cartels.”

The Lobos also participate in micro-trafficking throughout Ecuador’s cities, mainly Quito, Guayaquil, and Quevedo. In March 2021, twelve Lobos members were apprehended and charged with various crimes, including micro-trafficking, extortion, robbery, and possessing illicit firearms. In February 2022, Ecuadorian authorities arrested ten alleged members of Lobos for kidnapping and murder charges in one of the more significant operations against the criminal group.

The Lobos and other mega-gangs have achieved dominance and penetration of the prison system through massive corruption of prison officials and bribery schemes reaching as high as prison directors. Lack of infrastructure and funding in many prisons throughout Ecuador has given gangs control over the facilities, often controlling movement and security within pavilions.

The violence throughout gang-controlled prisons of Ecuador reflects the group’s struggle to control drug trafficking routes outside the prison walls. Prison riots are often proxy wars between groups, with the Lobos using violence as retaliation for confrontations on the outside.

The Lobos are allied with several smaller criminal groups in Ecuador, including the Chone Killers and the Tiguerones. The groups have identified themselves as the Nueva Generación. Some analysts believe that the name pays homage to the Mexican criminal group, the CJNG, allegedly the Ecuadorian syndicate’s principal international connection.

The Lobos have connections to other international actors and are linked to Balkan criminal groups, especially Albanians. Nueva Generación reportedly sources the cocaine they traffic through Ecuador’s port cities from the 48th Front, a dissident faction of the now-demobilized Revolutionary Armed Forces of Colombia (Fuerzas Armadas Revolucionarias de Colombia – FARC).

Domestically, the leading rival group of the Lobos are the Choneros, Ecuador’s largest gang. While the Lobos used to be allies of the latter group, they splintered off in early 2021. They also maintain a rival with a smaller gang, the R7, which has led to dozens of deaths in 2022.

Ecuador has the third-highest level of cocaine seizures in the world after Colombia and the United States, according to the United Nations Office on Drugs and Crime’s World Drug Report 2022. This means more cocaine, more money, and more weapons flowing through the hands of Ecuador’s gangs, including the Lobos.

Over the last three years, the Lobos have played a key role in the breakdown of security in Ecuador, leading the country to have the highest homicide rate increase in Latin America in 2021. The Lobos and their allies have helped bring criminal tactics to Ecuador that the country had rarely seen, including gruesome prison massacres, a normalization in contract killings, the use of car bombs, mass targeting of police, and bodies left hanging from bridges as warnings.

There is little indication this will change soon. Ecuador’s government has not brought any fresh ideas to the table, and the Lobos have only grown in strength.