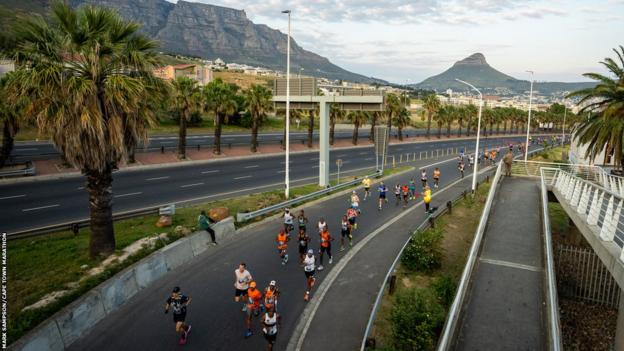 Cape Town is a city battling to limit the impact of climate change and now organisers of its marathon are hoping to create the greenest sporting event in the world.

With world leaders in Egypt for COP27 – the United Nations’ climate change summit – having been holding talks on limiting the rise in global temperatures prior to the conference’s close on Friday, the race to offset the imprint of sporting events is also heating up.

A study by the Rapid Transition Alliance suggests the global sports sector contributes the same level of emissions as a medium-sized country, which is why the annual event in South Africa wants to play its part.

“We see ourselves as a leader in that field. We were the first carbon-neutral marathon in the world in 2017 and we’re proud of that,” Barry van Blerk, the director of the Cape Town Marathon, told BBC Sport Africa.

“We want to bolster one of our key objectives, to get better in that field every year, and to see how we can offset carbon – not only around the marathon, but also after the marathon to have a carbon-neutral event.”

With over 20,000 participants converging on Cape Town from across the globe for the 26.2 mile race, as well as 5km and 10km runs and two trail courses over 22km and 46km, its impact on the environment is huge.

But organisers shifted their focus from just participation to long-term sustainability in 2013, and were able to offset 4,403 tonnes of carbon – a figure roughly equivalent to driving a diesel car around the world 66 times – emanating from hosting the 2017 edition of the race.

Tree-planting and becoming the seventh major

For this year’s event, held in October, some medals were made from recycled metal and others from eco-friendly wooden materials, while water was served in 100% biodegradable cups and some participants were given trees to plant.

“It’s part of the ethos to get runners to run for a purpose,” race co-founder Elana Meyer, who won an Olympic 10,000m silver medal for South Africa in 1992, told BBC Sport Africa.

“We’ve got the ‘Run for Something’ campaign to urge runners define a purpose beyond their own footsteps,”added the former half marathon world record holder.

Select runners were given saplings to grow a spekboom, an environmentally beneficial tree said to be among the highest oxygen-producing trees in the world, with another 5,000 potted plants distributed to finishers.

“I am definitely happy to get a tree instead of a medal,” said Allan, one recipient.

“Medals just sit in your cupboard and you never look at them again, so it’s nice to plant a tree and grow something that reminds you of the race.”

Meanwhile, over 200 volunteers dedicated themselves to recyclable waste management during the event and organisers hope their environmentally-friendly credentials will play a huge role in their dream to become the first world marathon major on African soil.

The South African race is a candidate to become the seventh major alongside Sydney Marathon in Australia and Chengdu Marathon in China, and is being assessed by World Marathon on key criteria such as participation, organisation, certification, legacy and sustainability.

Only one will be picked in 2024 to join the six other prestigious races in Berlin, Boston, Chicago, London, New York and Tokyo as the seventh major from 2025, with Van Blerk hopeful Cape Town will be picked given Africa’s contribution to long-distance running.

“When we talk about the top runners in the world, you think Africa,” Van Blerk said.

“All the current major winners are from Africa, and we don’t have a major on African soil. We feel the right thing is to give these runners an opportunity to run on home soil, and for the local people to see their champions and their heroes competing in on home soil.”

The planet’s main elite marathon runner is two-time Olympic marathon champion Eliud Kipchoge. He is urging sport to combat climate change after the Kenyan world record holder set up a foundation which concentrates on conservation.

The 38-year-old Kenyan was inspired to take action after realising clean air is needed to run, and that training in a polluted environment makes it impossible to perform.

“When there is no rain, when it is dry, then I don’t think you can train. The next generation is in danger if we don’t start now to conserve the environment, through planting trees and conserving our water.

“We are here to sensitise the whole community about plant conservation.”

Among Kipchoge’s collaborations is a tree-planting project in Kaptagat, the village where he trains.

It is a tradition for athletes who train in the camp in the south-west of Kenya, including the retired two-time 10,000m Olympic champion Haile Gebreselassie, to plant trees there.

“Without the clean air of Kaptagat, I couldn’t be where I am today so I’m grateful to the forest,” Kipchoge said.

“I’m grateful to the Kenya Forest Service for taking care of the forest, and that’s why I formed the foundation. I put key number one as conservation in order for me to conserve the environment and the whole forest of Kaptagat, as giving back to the society.”

Kipchoge is about to plant 42,000 indigenous trees and says the forest in Kaptagat is just the start for his foundation.

“We want to adopt a forest in every county to make sure that we get over 50 acres [of trees],” he said.

“The reason for planting indigenous trees is that they are rich in production of oxygen.”

Kipchoge describes sport as a “universal profession” and believes it is the fastest and most effective platform to spread the message of fighting climate change as widely as possible.

“Sport can reach billions of people across the world in an easy way,” he added.

“There is not a platform in this world where you can push an agenda through apart from sport. From athletics, to motor sports to football, to any sort of sport, it’s the only way to push and reach the general public as fast as possible.”

Perhaps fittingly given the involvement of both Kipchoge and Cape Town race organisers themselves, the battle to save the world is a marathon not a sprint – but the race is on.