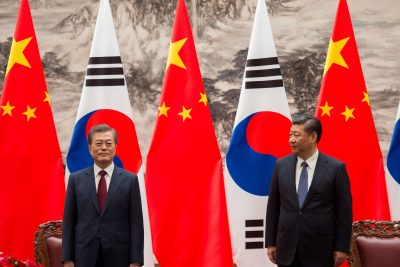 During the tenure of former South Korean president Moon Jae-in, South Korea became one of the most anti-China nations in the world. Yet the Moon government was actually the most ‘pro-China’ government in South Korea’s history.

China’s reaction to South Korea’s deployment of the US Terminal High Altitude Area Defense (THAAD) anti-ballistic missile defence system is often cited as the primary reason for the decline in South Korea–China relations. But Moon’s policy indecisiveness and inconsistent dialogue with China are also significant factors, despite often being overlooked.

Moon was widely regarded as a ‘pro-China’ leader in South Korea. Yet South Korea–China relations under Moon hit their lowest point in 30 years of diplomatic relations. Despite Moon’s repeated invitations, Chinese President Xi Jinping did not visit South Korea during Moon’s presidency or engage in a single video conference during the COVID-19 pandemic. While it is easy to attribute this to Chinese retaliation against South Korea’s deployment of the THAAD system, the reality is more nuanced.

Moon often landed himself in controversy for what his critics called his ‘pro-China’ disposition. In the wake of COVID-19, the Korean Medical Association repeatedly advised the Moon government to halt air arrivals from China. Moon did not follow this advice as he was working on a plan to invite Xi to Seoul.

Moon also came under criticism for failing to control exports of face masks to China despite a severe supply shortage at home. During a phone call in February 2020, Moon told Xi that ‘China’s difficulties are our difficulties’. The South Korean public went up in arms, with some claiming he seemed more like the president of China than South Korea. An angry online petition started on Moon’s own presidential office petition website calling for his impeachment. It quickly gathered 1.4 million signatures.

Public uproar also followed Moon’s speech at Peking University in 2017 when he said that ‘China is a high mountain’ and South Korea is a ‘small nation’, adding his aspiration to join the ‘Chinese Dream’.

As a presidential hopeful, Moon said that the THAAD deployment should be postponed for the next president to decide. Beijing saw Moon’s words as favouring its position over Washington’s. Moon’s interlocutors also assured China that Moon would reverse the deployment once elected.

When Moon was elected, he characterised the THAAD deployment as ‘temporary’. Moon also ordered the suspension of the additional deployment of the THAAD launcher, citing the need to conduct an ‘environmental impact assessment’, disappointing the United States but elevating Chinese hopes.

Yet ahead of a summit meeting with former US president Donald Trump, Moon affirmed that THAAD would not be overturned. China felt betrayed and distrusted the Moon administration after that.

South Korea’s poor negotiation preparations became a source of distrust too. When the Chinese side took issue with the THAAD’s powerful radar facing China, Moon’s interlocutors assured them that the direction of the radar could be reoriented. Yet South Korea did not have such authority over the US military asset.

When Moon visited China, he faced a chilly reception. No dining events were scheduled ahead of a banquet with Xi, despite the fact that it was a state visit, which is usually accompanied by full diplomatic decorum. South Korean newspaper Dong-a Ilbo acerbically called Moon a state guest in China who had three meals in a row without any Chinese officials to talk to. After the summit, Xi and Moon did not issue a joint statement. Chinese security guards also brutally beat two South Korean journalists traveling with Moon.

Moon visited China after making the ‘three no’s’ concessions to China, which were supposed to prevent further South Korea–US military cooperation. But distrust continued to impede South Korea–China relations throughout Moon’s tenure. The Chinese side lost its vigour in dealing with the Moon government, resulting in the decline in Seoul–Beijing ties.

This also led to the loss of momentum for Xi’s visit to South Korea that Moon had eagerly hoped to use as an occasion to normalise ties. Xi’s visit never materialised during Moon’s presidency. The subsequent COVID-19 pandemic served as a convenient excuse to justify ‘social distancing’ between Moon and Xi.

The THAAD decision was made by Moon’s predecessor, former president Park Geun-hye. But China’s anger was directed towards the Moon administration. Moon did not withdraw THAAD and did not take any strategic steps to preserve Seoul’s relationship with Beijing either.

The deployment of THAAD sowed discord in bilateral relations and the way Moon handled the matter sowed distrust. China was angry with the Moon administration’s inconsistency. It led to an increasingly hardened Chinese stance that shut down communication channels.

The Moon administration’s indecisiveness with THAAD, compounded with inconsistent signals and many unmaterialised overtures, deprived both nations of the opportunity for a quick resolution of the situation. The legacy of diplomatic doldrums under Moon continues to haunt the current Yoon Suk-yeol administration and the South Korea–China relationship in general. Seoul and Beijing now have additional agendas to deal with, such as semiconductor and global supply chains, in addition to the ongoing thorny THAAD dispute.