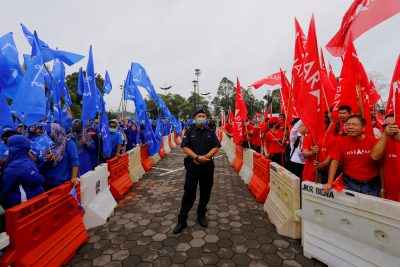 Malaysians go to the polls on 19 November 2022. This general election is the 15th that the country has held since independence, a rare record of continuity in the Southeast Asian region. But throughout Malaysia’s electoral history, the playing field has been starkly uneven, advantaging the long-time incumbent, the United Malays National Organization (UMNO) and the Barisan Nasional (National Front) coalition that it leads.

UMNO long operated in a kind of hybrid system dominated by a single party. In this pattern, UMNO rooted its vehicle in a divided and communally ‘ranked’ society. It then drew electoral propulsion from favoured Malay voters, framed as ‘indigenous’, and economically disadvantaged. To deliver to its constituents, UMNO fused its party apparatus with the state bureaucracy and gained command over public institutions and resources, the business establishment and the imagination of its constituents. These strategies magnified UMNO’s genuine popularity, enabling the party, with its Barisan partners in tow, to win successive electoral victories.

But the UMNO-led Barisan lost a ‘stunning’ election in 2018. UMNO’s gross amassing of the resources upon which its dominance depended, peaking in the 1Malaysia Development Berhad scandal, so alienated Malay voters that they cast their ballots against the party in protest.

Through the split that resulted, the opposition Pakatan Harapan (Alliance of Hope), a multi-ethnic coalition, rose to snatch a plurality and claim state power. A central question, after this electoral turnover, was whether Malaysia could sustain transition to ‘full’ democracy. It could not. After less than two years in office, Pakatan fell prey to internal leadership rivalries and crippling defections, driven by UMNO’s relentless stoking of Malay regrets and anxieties.

Joined by defectors from Pakatan, UMNO gained enough seats in parliament that it returned to power. But it only did so as part of an uneasy trio of coalitions. This involved its own Barisan formation, some brittle ties to defectors from the Bersatu party and a strained relationship with the Malaysian Islamic Party (PAS). Fierce rivalries soon set in.

Along this rocky road, UMNO was buoyed by winning two state-level elections. Its leaders gauged that Malay voters had returned to the fold. They pressed for a general election to be held, then shed Bersatu and PAS to go it alone. The UMNO prime minister, Ismail Sabri Yaacob, obliged them, gaining the Malaysian King’s consent in October 2022 for the parliament’s dissolution.

Notwithstanding the uncertainty that surrounds this election, the betting this week is that UMNO will fare best, perhaps poising it to stage a full recovery. Its ground-level machinery and business links have been reactivated. Its Malay constituents, informed by the last election and the diminution of their privileging, are likely to discipline their voting. If the question for the last election was whether Malaysia could transition to ‘full’ democracy, the question this time is whether UMNO can reinstitute its single-party dominance.

But whatever the outcome of this election, its conduct attests in several ways to the benignity of Malaysian politics in the contemporary global milieu.

Despite the high stakes of the election, its manipulated procedures and the possible renewal of single-party dominance, no serious political or societal group is seeking to discredit it. In unsettled times, many veteran politicians have been dropped from their party slates, leaving them so infuriated that they are running with rival parties or as independents. Their prospects are slim. But none have threatened to reject results that go against them. After the election, no losing parties will appeal to the army to intervene or to militant groups to make trouble. Rather, they will enter the electoral contest again in the state-level elections that will commence in March 2023.

This engrained regard for rules, however uneven the playing field, distinguishes Malaysian political life. Electoral and parliamentary institutions have remained unaltered in their basic framework since independence. For Malaysia’s political class, hybrid politics are the only game in town.

At the same time, though rules may be observed in Malaysia, elections are largely fought on a disagreeable, yet ineluctable terrain of ethno-religious loyalties and hatreds. Class outlooks remain darkly overshadowed by unshakable cultural identities and resentments.

To be sure, Malaysian identities are evolving, with polling showing that Malay identification has shaded into more robustly Islamic belief systems and signifiers. Among ethnic Malays and minorities alike, polling indicates that most voters head into this election believing that parties are rightfully designated by ‘race’. They oppose any secular separation of state and religion. Despite the great increase in young and first-time voters, upon whom much analysis has been focused, these outlooks persist.

Democrats may regret this. PAS may benefit. But in compensation, no deadly right-wing populism has cropped up in Malaysia, pitting nativists against ‘woke’ progressives, even as the latter’s values are heartily reproduced in some of the country’s university life and civil society. Though elections are waged on a heated landscape of ethno-religious rivalries, societal combustibility is still dampened by institutional legacies and frameworks.

By all counts, Malaysia’s 15th general election is too uncertain to closely predict, a testament again to the democratic substance still found in hybrid politics. But confidence remains strong that whether UMNO starts to restore its single-party dominance or not, this election will be peacefully contested and its results accepted. In this age, this is a singular accomplishment.

William Case is Professor and Head of the School of Politics, History and International Relations at the University of Nottingham Malaysia.