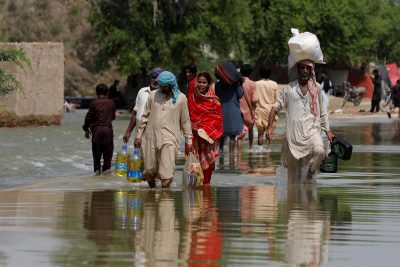 For much of 2022, Pakistani politics were in a state of severe crisis, exacerbating concurrent economic, humanitarian and security challenges. All in all, 2022 was a nightmare year for Pakistan.

The origin of the political crisis was a falling out between two close allies, former prime minister Imran Khan and former army chief Qamar Javed Bajwa. After Khan became prime minister in 2018, he enjoyed a close relationship with Bajwa, who, at the time, held the most powerful political post in a country with a long legacy of military rule and influence.

Their relationship began to go south at the end of 2021 when the two disagreed on the process to appoint a new spy chief. Other factors — from Khan’s anti-West rhetoric to his appointment of a political ally as chief minister Punjab — contributed to growing tensions between Khan and the army in early 2022.

As Khan’s relations with Bajwa suffered and Pakistan’s debt-ridden economy grew increasingly fragile, Khan and his party struggled to govern on multiple fronts. The opposition sensed Khan’s vulnerability and staged a series of anti-government protests. In April 2022, the opposition ousted Khan from power in a parliamentary no-confidence vote — the first time in Pakistan’s history that such a move against a prime minister was successful. Given the political clout of the army chief, the no-confidence vote would not have gone through without Bajwa’s backing.

Khan stepped down but excoriated the vote as illegitimate, decrying it as part of a regime change orchestrated by the opposition and army leaders and sponsored by the US government. There is no evidence of US involvement in Khan’s ousting.

Khan returned to the opposition and reverted to the role of street mobiliser that he had long played prior to 2018. He staged large rallies that demanded early elections — currently scheduled for October 2023 — and condemned the new government, the military and the United States. He also accused his political rivals of being traitors. In a country where the public tends to assume the worst about its political leaders and about US intentions, the narrative was widely embraced and helped increase Khan’s popularity. His party won several local elections over this period.

Islamabad, for its part, played retributive politics. It threatened and arrested key aides and journalists close to Khan. This dangerous polarisation and brinksmanship culminated with the attempted assassination of Khan in November when he was leading a ‘long march’ to Islamabad. Khan blamed senior civilian, military and intelligence officials for the attack.

After the assassination attempt, the crisis abated. Khan paused his street protests to recover from leg wounds, which lowered the political temperature. A key source of political uncertainty was eliminated in late November, when Lieutenant General Asim Munir succeeded Bajwa as chief of army staff. Bajwa’s departure removed a major contributor to the country’s spiralling polarisation.

Khan accepted Munir’s appointment, and by the end of 2022, he had reduced the intensity of his anti-military rhetoric. This was likely because Khan wants to return to power and knows that in a country where the army remains a formidable political player, his prospects of re-election are enhanced by patching up ties with the military. In another sign of de-escalation, Khan called off his long march in late November and instead tried, unsuccessfully, to pressure Islamabad into agreeing to early elections.

By the end of 2022, the economy was at risk of default as foreign exchange reserves began to slide into the single digits. Millions of flood victims were still in desperate need of food and health aid and the Pakistani Taliban had also redeveloped its presence in the country.

Of the many crises that battered Pakistan in 2022, it finished the year with its economy in an especially alarming state. Food inflation soared to 35 per cent in December and overall inflation sat at a 40-year high. Exchange rate stability and the country’s broader economic malaise impacted exports deleteriously. The International Monetary Fund, concerned about government subsidies, delayed the release of badly needed assistance — leaving Islamabad to scramble for emergency funds from China and its Gulf allies.

Pakistan’s floods prolonged its economic misery, with the damage estimated to cost US$40 billion. With nearly 40 percent of Pakistan’s top food crops and livestock damaged or destroyed by the floods, sparse harvests will reduce agricultural production and worsen food shortages.

Pakistan will face these same acute challenges in 2023. They will be much easier to tackle if the political environment is less fraught and polarised. But that is unlikely to happen. While the political crisis may have eased to an extent, Khan and the government remain at loggerheads, and neither side has indicated a willingness to make concessions.

Pakistan enters 2023 with worsening economic and security challenges, flood victims still in need of help, a hyperpolarised political environment and an unpopular government struggling to muddle through. Last year may have been a nightmare for Pakistan, but this year could be just as bad — if not worse.

Michael Kugelman is Deputy Director for the Asia Program and Senior Associate for South Asia at the Woodrow Wilson International Center for Scholars, Washington, DC.

This article is part of an EAF special feature series on 2022 in review and the year ahead.