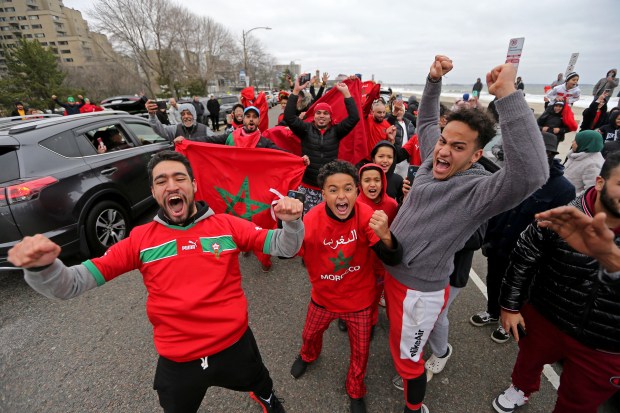 Moments after Morocco beat Portugal in a quarter-final game of the World Cup, ecstatic Moroccans poured into the streets of the North African country to wave flags and honk horns and it was much the same closer to home, on Revere Beach.

“Hey man, it means a lot for us. Our country tried the hardest, they played with their heart and we made it man, we made it,” Walid Hartani, of Revere, shouted to the Herald over the sounds of insistent horns and cheers. “Lot of celebrations. It means a lot to our Arab people, to the whole of Africa.”

Morocco beat the Portuguese 1-0 in Qatar Saturday, knocking Cristiano Ronaldo, 37, believed by many to be one of soccer’s greatest players of all time, out of the tournament and making the Atlas Lions the first African and first Arab team to reach the World Cup semifinals.

The Moroccan capital, Rabat, was bursting with joy while Morocco fans also celebrated in the streets of Doha and in cities across Europe, where many Moroccans live. Other fans from the Middle East and Africa who have adopted the Atlas Lions as their team were also jubilant.

The jubilations were so great in Revere Beach that state and local police shut down the Parkway so the celebration could go off without a hitch. Fans stood on cars and others hung out of car windows letting the flag of morocco, a five-pointed green star on a red field, wave in the freezing wind.

For fan Ahmed Bensoulgane, originally from Casablanca but living in Revere, the moment had him a bit choked up.

“Morocco’s the best, pride in the heart for Morocco. All the players did well, so they’re worth it, they deserved to win,” he told the Herald, his voice overcoming his emotion and fighting to be heard over the horns of nearby vehicles. “And we’re going to win the World Cup! We’re going to get it!”

Morocco will face defending champion France in the semifinals on Wednesday.

“I am so happy that I don’t even know if I can express myself, but if we are here now, I believe that we can make it to the final,” Yasmine Benmehredj said during celebrations in the Moroccan capital.

In Qatar, hundreds of elated fans clad in green and red outside Al Thumama Stadium celebrated Morocco’s win, chanting, ululating, banging on drums and waving the national flag. Some chanted: “Congratulations to us for this beginning! It will only go on and on!”

“This is unbelievable. It’s the first time ever,” said Saleh al-Rayes, a 27-year-old fan from Saudi Arabia in Doha.

As an Arab at the first World Cup held in the Middle East, al-Rayes said he feels a sense of inclusion and representation in the world of soccer, a spot that has been dominated by European and South American teams.

“You come in as an underdog and then you win. It’s Arab pride,” al-Rayes said. “All Arab countries were here in the stadium supporting Morocco.”

The Associated Press contributed to this report.