Imperiali has promised to tell Anti-Mafia magistrates in Naples everything he knows from his 20-plus-year career in the Neapolitan-based Camorra and potentially the recently broken up Super Cartel. He has gone ‘pentito’ – an Italian phrase meaning “repentant” that is slang for becoming an informant. He was arrested in Dubai in 2021 after 5 years on the run from his native Italy.
Raffaele Imperiali, also known as “Lelluccio” is notorious for possessing a pair of stolen Van Gogh paintings and buying 40kg of gold per week, valued at €2 million, using profits from global drug sales of more than 400 kilos of cocaine per month. In intercepted encrypted text messages, he also claims to have had access to the Interpol database via a Moroccan contact in order to check on operations and arrest warrants against his network. “I had the Interpol systems checked,” Imperiale told prosecutors in Naples, revealing he then instructed pal Raffaele Mauriello to “come” to Dubai. 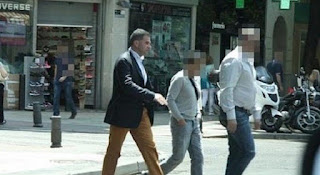 Raffaele Imperiale was born in Castellammare di Stabia in Naples, Italy to a wealthy local businessman father. He made connections with Dutch traffickers after moving to Amsterdam in the 1990s, running a coffee shop he inherited from his brother. There while dealing ecstasy he got his start under the Di Lauro Clan of Naples, Italy, home of the Camorra. He then moved on to the more profitable cocaine trade. He worked as a broker with some of Italy’s largest mafia groups including the ‘Ndrangheta in addition to his clan, said to be one of the top Camorra drug trafficking groups.
In 2004, there was an internal Camorra war against the Di Lauro Clan in Scampia that resulted in over 100 deaths. The split occurred after Paolo Di Lauro, head of the clan became a fugitive, and his son Cosimo eventually took over and attempted to centralize their drug dealing efforts and cycle in younger members. Raffaele allied with the group that split, known as Scissionisti di Secondigliano who was made popular in the TV series Gomorrah. He helped supply weapons and became a member of the Amato-Pagano Clan which included members that had first introduced him to the Camorra life. His alliance was a key part of what allowed that side to come out on top. Imperiali speaks five languages and built his fortune brokering deals with not only the Italians additional as crime groups in Ireland, the UK, Holland, and South America. He returned to Italy from Amsterdam in 2008 shortly before the heads of the Amato-Pagano Clan were arrested.
In 2016, after Raffaele fled his native Italy for Dubai, authorities discovered two Van Gogh paintings hidden in a wall on one of his properties. The paintings had actually been stolen from the Van Gogh museum in Amsterdam in 2002. It is possible he received the paintings in exchange for payment of a drug load as he had partners in that country or had purchased them for himself. However, it was later believed that he held onto the paintings in order to attempt to use them as bargaining chips and reduce a possible prison sentence for himself. It is reported he had spent over €7 million in a three-month timespan, including €200,00 in airfare. He spent more than €3 million just on “personal expenses” while on the run.

Imperiale’s dramatic arrest made international headlines last year as he was arrested in his luxury villa possessing a Russian passport. The application for his extradition stated that he was a member of Europe’s so-called ‘Super Cartel’ along with Irish mobster Daniel Kinahan, Balkan mob boss Edin Gačanin and the jailed Dutch Mocro Maffia leader Ridouan Taghi. He also worked with Colombian groups, including Los Urabeños, also known as the Clan del Golfo or the Gaitanista Self-Defense Forces of Colombia (Autodefensas Gaitanistas de Colombia – AGC).

Drug Enforcement Agency (DEA) documents sent to the Dutch police have identified Imperiale, Taghi, Gačanin, Richard ‘El Rico’ Riquelme Vega, and Daniel Kinahan as the heads of the ‘Super Cartel’. This group found its base in Dubai where authorities first discovered their connections as they had attended the lavish 2017 wedding of Daniel Kinahan. The year prior he had fled to Dubai from Ireland and Spain following a public shooting that led to the killings of 18 people in an Irish gang war and out of fear of arrest for drug trafficking and murder.

In Dubai, the Super Cartel members, all wanted in their resident countries, could use their wealth to blend in as the place was seen as a safe haven for criminals to network and reside in. Until a few months ago it had limited extradition treaties with most western countries. Now, Dubai/UAE is cooperating much more closely with various law enforcement agencies, as evidenced by several high-value targets wanted by Spain, the Netherlands, and Europol were arrested there in November 2022.
Imperiali was one of the first of the group arrested in Dubai in 2021 and extradited back to Italy earlier this year. It is said that he has already made four extensive statements to authorities. His capture was largely due to the interception of EncroChat messages. The company provided legally encrypted phones that were set up to guarantee cybersecurity. However, the phone system was infiltrated by Europol in 2020, leading to hundreds of arrests across Europe. Raffaele Imperiale is said to have used the encrypted chats to talk to traffickers such as Daniel Kinahan about ongoing shipments and other drug-related business, according to Europol.
He had claimed that his extradition was a kidnapping and breached his human rights according to the European Convention, but the Italian court found that there were no grounds for this appeal. His warrant was to serve an 18-year prison sentence for various offenses including drug trafficking in Italy.
He was then arrested again in his jail cell in connection with another case regarding a seizure of 4 metric tons of cocaine worth more than €800 million. It is believed his decision to become an Italian witness came shortly after this latest arrest. He stated that he was tired of his life and wanted to change.
It is currently not known if his information led to the recent captures in Dubai, Spain, and across Europe. But based on providing multiple statements since his arrest, he likely was cooperating before the massive Super Cartel bust and his status was not revealed until after the network was largely dismantled. It has been reported however that he has so far provided information and testimony against two co-defendants in the criminal cases against him in Italy.