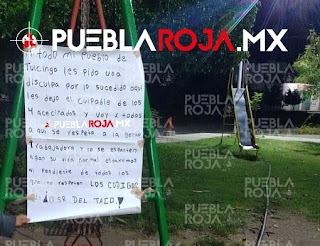 “Here i leave you the person responsible for the four murdered”, this is part of the narco message that accompanies the human remains found in two black garbage bags in the Bicentennial Park of Tulcingo del Valle. This is an allusion to the four people kidnapped (two men and two women) on Sunday, November 13 in Tulcingo and found a day later executed in Huamoxtitlan, in the state of Guerrero. The message is signed by an alleged criminal leader who calls himself El Señor Taco.

State police went to the place and confirmed that they were human remains, so they proceeded to secure the area and requested the intervention of the State Attorney General’s Office (FGE).

Next to the human remains there was a poster with the following message: “To all my people of Tulcingo, I apologize for what happened. Here I leave you the culprit of the four murdered, I’m going after the rest of them. Working people will be respected here. No one here should panic, go about your normal life. We will be on the lookout for all those who do not respect the codes. Sincerely, Mr. Taco”.

Ministerial agents and experts from the Public Prosecutor’s Office went to the place to carry out the removal of the body and to begin with the investigations of the case. Until the closing of this newspaper edition the deceased individual remains unknown.

It should be remembered that last Sunday, November 13, Santa, Fabiola, Pedro (alias El Rabias) and Gonzalo, who were inhabitants of Tulcingo del Valle, were abducted. A day later they were found dead on the side of the Tlapa-Puebla highway, near Huamoxtitlán, in the state of Guerrero, their bodies had their throats slit and showed signs of torture. 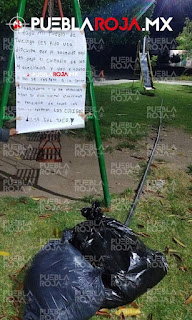 The police commander of Tulcingo del Valle, Puebla, Maurilio Herrera, was recorded confessing to the murder of four people, whose bodies were found last November 14 along the Tlapa-Puebla highway, in a place known as “El Terreno”.
Video translation reads as follows:
It happened in Tulcingo del Valle, Puebla. They arrived to the El Coco area, they were removed from the vehicle. And they were questioned why they had done those things, they were somewhat aggressive. We beat them up. Following this I cut Piter’s throat. Afterwards, I told Diego Cabañas to cut the throats of the other 3 persons. He finally got it done. After this we loaded their corpses onto El Moros vehicle. Diego and Alexis threw their bodies at the state line of Huamuxtitlán, Guerrero. 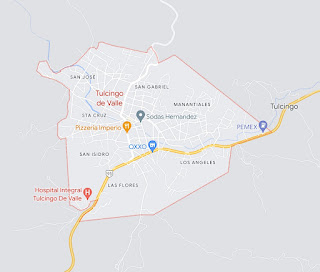