Ukraine President Zelensky To Visit White House And Capital Hill On Wednesday. Will Make An Address To A Special Joint Session Of Congress 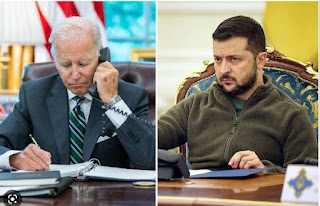 * He would also visit Biden at the White House

* It would be his first U.S. visit since Russia invaded Ukraine

Ukrainian President Volodymyr Zelensky may visit the White House and address a special Joint Session of  Congress on Wednesday in his first visit to the U.S. since Russia invaded his country.

The trip is not 100 percent happening and highly dependent on the security situation. It could be called off at the last minute.

It’s ‘not confirmed,’ a source familiar with the situation told DailyMail.com. ‘All dependent on security. Leaks not helping.’

WNU editor: Ukraine President Zelensky is arriving at the same time that Congress is about to vote on a bill that includes a massive $45 billion in emergency aid to Ukraine …. Lawmakers unveil $1.7T bill to avoid shutdown, boost Ukraine (AP).

But I think the real reason why Ukraine President Zelensky is going to the White House is to plead for  direct US military involvement in the war. The big fear in Ukraine right now (if not panic) is the  massive Russian military campaign that many have been predicting for the past two months. And if Ukraine’s top General is to be believed, Ukraine lacks the resources to counter such an attack (link here).

On another note. Remember the last leader who was at war and visited the White House pleading for help …. Joe Biden meets with Afghan President Ashraf Ghani at White House, says ‘we’re gonna stick with you’ (ABC News/AP).