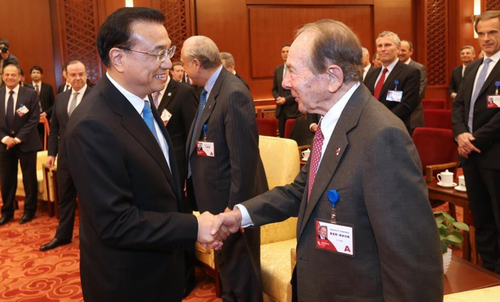 A significant and unexpected new Wall Street Journal report has revealed that a few days prior to the Xi-Biden meeting last week at the G20 summit in Bali, the two countries embarked upon a private back-channel dialogue of top policy advisers and business executives in New York, which was approved by both governments.

The meeting was described by Retired Adm. Mike Mullen as seeking to prevent the continued “downward trajectory” in US-China relations “at a dangerous time.” Beijing is relying on an American businessman described as an “old friend of China” with a long successful track record of positive dealings in China: insurance executive Maurice “Hank” Greenberg. “As the two great powers of the time, we need to try to turn this around,” Mullen commented of the closed-door talks earlier this month.

WNU Editor: I am always skeptical when I see Washington’s elites pushing the same policies with China that helped to de-industrialize the U.S. in the first place. And it is the same US businessmen who pushed for it 20/30 years ago!!!!