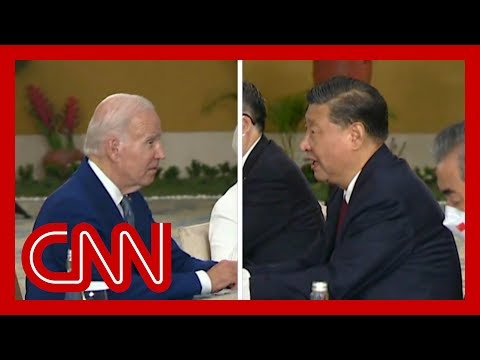 Daily Mail: Biden insists there’s no ‘imminent threat’ Beijing will invade Taiwan – after Xi told him island is ‘first red line that cannot be crossed’ in face-to-face meeting: President says there won’t be a ‘new Cold War’ and stands by ‘One China Policy’

* They spent three and a half hours discussing North Korea, Taiwan, climate change and food security

* ‘I’ve met many times with Xi Jinping, and we were candid and clear with one another,’ he said

* But Xi told Biden that the island was his ‘first red line’ in US-Chinese relations, according to state media

* The two men last met in 2017 in Davos. This was their first meeting since Biden was sworn in as president

* They have spoken five times by phone during Biden’s presidency

* Neither wore masks, although the entire delegations did

* ‘As leaders of our two nations, we share responsibility, in my view, to show that China and the United States can manage our differences,’ said Biden

President Joe Biden said he believed there was no imminent threat of China invading Taiwan, after spending three and half hours on Monday evening in a meeting with his Chinese counterpart Xi Jinping.

However, Chinese media were briefed that Xi said the island was the ‘first red line’ in their relationship.

The two leaders displayed warm body language before cameras were removed from their meeting in Bali, on the sidelines of a G20 summit.

WNU Editor: President Xi had only one main message to give to President Biden …. Xi told Biden Taiwan is first red line that must not be crossed, urging US to respect China’s path, system (Global Times).

After meeting with Xi, Biden says there “need not be a new Cold War” between U.S. and China — CBS News

Biden and Xi say US and China should compete “responsibly” — Axios