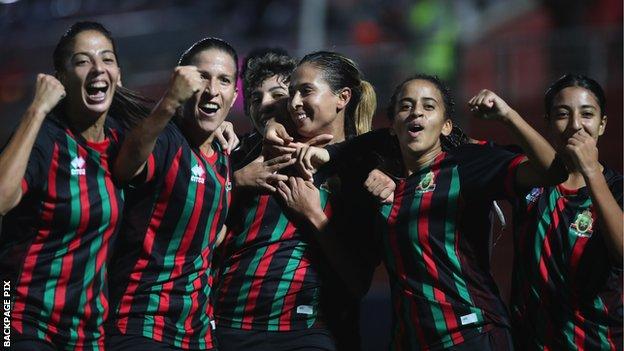 Moroccan hosts AS FAR will face defending champions Mamelodi Sundowns in the final of the Women’s African Champions League after both clubs narrowly won their semi-final ties on Wednesday.

Both sides qualified for the semi-finals with 100% records from the group stage and will face off for the trophy on Sunday in Rabat (19:00 GMT).

Jerry Tshabalala’s Sundowns won the inaugural Women’s African Champions League title in Egypt last year, and have only conceded one goal in nine matches in the competition.

Sundowns lacked the fluency and confidence from their group-stage performances in Morocco, and Asha Djafari came close to opening the scoring for Tanzanian club Simba eight minutes after the break in Rabat but saw her effort from inside the box smothered by Sundowns goalkeeper Andile Dlamini.

Lesotho international Rabale broke the deadlock by rounding off a slick passing move with first-time shot from 20 yards out, netting her third goal of the tournament,

Djafari almost equalised with a swerving long-range effort which squirmed under the hands of Dlamini and went narrowly wide, and Sumba could not find a way back into the match.

Bayelsa Queens started well in the second semi-final but could not take their early chances and were punished when Fatima Tagnaout raced through from the left wing to tee up Jraidi for the opener in the 27th minute.

The Nigerians went close through Glory Edet’s powerful strike and Juliet Sunday’s header after the break but AS FAR held on to book their place at the Prince Moulay Abdellah Stadium on Sunday.

The clash of a Moroccan side against a South African one in the North African country will draw echoes of the Women’s Africa Cup of Nations final from July, when South Africa beat Morocco 2-1 to become continental champions for the first time.