54 Individuals Have Been Extradited In 2022 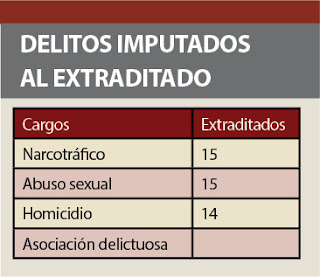 Mercedes Ivonne Martell Obeso, handed over to the US government on October 17 to stand trial in a Southern California District Court for her alleged links to the Sinaloa Cartel, an organization for which she allegedly laundered drug money between 2012 and 2015, is one of four women who have been extradited abroad by Mexican authorities this year.

During 2022, the Attorney General’s Office (FGR) has extradited people, mainly Mexican nationals, whose extradition was declared appropriate by the Ministry of Foreign Affairs (SRE) to be tried in various countries, especially in the United States, for their probable responsibility in the commission of conduct considered as crimes. 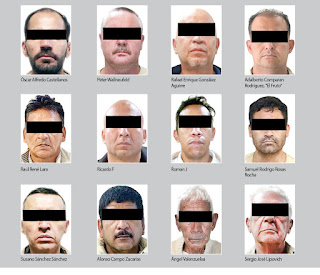 Drug traffickers, sexual abusers in different forms and murderers account for more than 80 percent of the individuals wanted by other countries. Among those accused of drug trafficking, some also face charges for organized crime, criminal association, money laundering and carrying a firearm. Other offenses, with only one case each, include human trafficking, arms trafficking, fraudulent administration, street terrorism and electronic fraud.

Among the individuals handed over to authorities in the United States, Argentina, Peru, Guatemala and Israel are individuals who were once cell leaders or lieutenants in the Arellano Felix Cartel (CAF), Guerreros Unidos (GU), Gulf Cartel (CDG), Los Zetas and Sinaloa Cartel, among others. The judicial authorities that received the most extradited individuals are located in the states of Texas, California, Arizona, Illinois and Virginia, although there were also alleged criminals referred to federal courts in eight other U.S. states.

In the case of women, such as Mercedes Martell, accused of money laundering in California, the four extradited were extradited for felonies. María Z. for criminal association and firearms trafficking in the State of Texas; Leticia S., for the murder of her partner in California; and María M., also Mexican, for crimes against health in the form of drug trafficking in the Republic of Peru when she traveled from one city to another, by air, transporting a suitcase containing cocaine.
The current year is not the year with the most extraditions, in the current six-year term there were 58 in 2019; 60 in 2020; 43 in 2021, which together with the current 54, make a total of 215. So far, the government administration that has handed over the most criminals abroad was that of President Felipe Calderón Hinojosa, with 587; followed by Enrique Peña Nieto, 394; in the case of Vicente Fox Quesada, only data from 2005 and 2006 is available, when 104 people were extradited abroad.
RELEVANT DRUG TRAFFICKERS 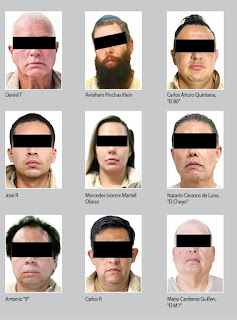 On January 20, Nahúm Abraham Sicairos Montalvo, alleged financial operator of the criminal cell headed by Dámaso López Serrano “Mini Lic”, son of Dámaso López Núñez “El Licenciado”, one of the leaders of the Sinaloa Cartel (CDS) in the previous decade, was extradited to the neighboring country to the North. He was charged in the U.S. District Court for the Southern District of California with trafficking large quantities of drugs to the U.S. between 2005 and 2016. He was handed over at the Toluca International Airport in Toluca, Mexico State.

Another of the so-called big fish of Mexican drug trafficking, Mario Cárdenas Guillén “Metro 1” and/or “El Gordo”, former leader of the Gulf Cartel (CDG), was extradited on May 17 of this year to be prosecuted in the Federal Court for the Eastern District of Texas for the crimes of criminal association and against health.
In 2003, “El M1” took over the leadership of the criminal organization after the fall of his brother Osiel. U.S. authorities accuse him of being responsible for the large-scale importation of cocaine into Houston, Texas.

Nine days later, Adán Casarrubias Salgado “El Tomate”, lieutenant and brother of Sidronio, who was head of the criminal group Guerreros Unidos and suspected of participating in the disappearance of 43 students from Ayotzinapa, was extradited from the Federal Center for Social Readaptation Number 11, CPS Hermosillo, Sonora, to the Federal Court for the District of Illinois, where he is accused of crimes against health.

On August 21, Carlos Arturo Quintana “El 80”, leader of the criminal cell La Línea, which depends on the Juárez Cartel, was sent to the U.S. He is listed among the most wanted criminals by the Federal Bureau of Investigation (FBI) of that country. He was wanted by the Federal District Court of New Mexico to answer for his probable responsibility in the crimes of criminal association and against health, allegedly committed through the Chihuahua border.
On September 11, the Mexican government extradited Juan Sillas Rocha “El Ruedas” and/or “El Sillas” to North America. It took almost eleven years for the trusted man of drug trafficker Fernando Sánchez Arellano “El Ingeniero” to be handed over to the U.S. District Court for the District of North Dakota, where he faces charges of criminal association and health offenses. He operated for the Arellano Felix Cartel between 2004 and 2011, handling drug trafficking into the country.
Another important member of the Gulf Cartel, Nazario Cavazos de Luna “Big Papa,” a financial operator, was extradited to the United States on September 26. The founder of the CDG is charged with drug trafficking and money laundering in the Federal Court for the Eastern District of Texas, where there is an open case against him for criminal association, organized crime, money laundering and carrying or possessing a firearm.