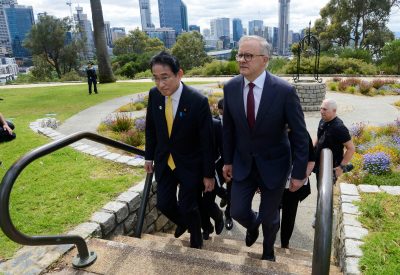 Throughout 2022, Australia–Japan military cooperation has been the subject of renewed focus. On 22 October, during Japanese Prime Minister Fumio Kishida’s visit to Perth, the two countries announced several new initiatives, including a renewed bilateral Joint Declaration on Security Cooperation. Both Australian Prime Minister Anthony Albanese and Kishida highlighted the January 2022 Reciprocal Access Agreement (RAA) as symbolic of the growing defence cooperation between Australia and Japan.

The RAA is a treaty-level agreement between Australia and Japan that reflects the outcome of negotiations that started in 2014. A significant stumbling block in those negotiations was Japan’s use of the death penalty and Australia’s opposition to it. That remains an issue for the Albanese government, which inherited the RAA from the Morrison government, and is currently under review by the Australian Parliament’s Joint Standing Committee on Treaties.

The RAA is a form of ‘Status of Forces Agreement’ that allows for the exchange of military forces and an associated civilian component of the visiting force. It seeks to resolve international and domestic legal issues that arise when military forces are exchanged and engaged in ongoing cooperation, such as joint military exercises.

The general approach of the RAA is that visiting forces remain subject to the law of the sending state while within the receiving state. But under Article XXI of the RAA, several exceptions complicate the operation of the provision.

For example, if a member of a visiting force commits a criminal act against a receiving state civilian while off duty and outside a military base, barrack or ship, the criminal law of the receiving state would apply. This would definitely be the case for serious crimes such as manslaughter and murder, raising some potentially very serious issues for an Australian visiting forces and civilian component member convicted of a capital crime in Japan.

Despite the global trend of countries moving away from capital punishment, Japan retains the death penalty for 19 crimes and 98 prisoners have been executed for murder by hanging since 2000. As of October 2022, there are 107 individuals on death row who have exhausted or abandoned their avenues of appeal. The UN Human Rights Committee has repeatedly raised concerns with the Japanese government concerning its death penalty in law and in practice.

In contrast, not only is Australia an abolitionist nation, but the Australian government took the bold step in 2018 of launching Australia’s Strategy for Abolition of the Death Penalty. This strategy sets Australia apart from other countries that have abolished the death penalty because of its outward-looking policy of pursuing abolition in other countries. It boldly states that ‘Australia will be a leader in efforts to end use of the death penalty worldwide’.

According to a Record of Discussion on Article XXI of the RAA, Australia may avoid its obligation to assist Japanese authorities in instances where there is a ‘sufficient likelihood’ of visiting forces and civilian component members facing the death penalty.

But withholding assistance does not necessarily protect visiting forces and civilian component members in all instances. For example, where the accused is on Japanese territory and the Japanese authorities have sufficient evidence to convict the accused, the lack of assistance by the Australian government is irrelevant. The Record of Discussion is also a non-legally binding document.

Australian ratification of the RAA with the knowledge that the death penalty may be applied to Australian citizens would be a clear breach of its 2018 strategy. It is not a remote hypothetical that Australians could be executed in Japan or other retentionist countries. Two Australian citizens, Andrew Chan and Myuran Sukumaran, were executed in Indonesia in 2015 — despite the Australian government’s efforts to prevent it.

A policy of this kind needs to be repeatedly reinforced and acted upon for it to be effective. Based on the current wording of the agreement and associated documents, the Australian government has not assured the public of its commitment to the 2018 strategy.

The RAA was negotiated under the previous Australian government. The Albanese government has a choice to be a ‘leader’ in promoting the abolition of the death penalty by requesting changes to the negotiated treaty text — or ratify the RAA as drafted and risk losing the legitimacy of its anti-death penalty advocacy.

Donald R Rothwell is Professor of International Law at the ANU College of Law, The Australian National University.

Mai Sato is Associate Professor and inaugural Director of Eleos Justice at the Faculty of Law, Monash University.