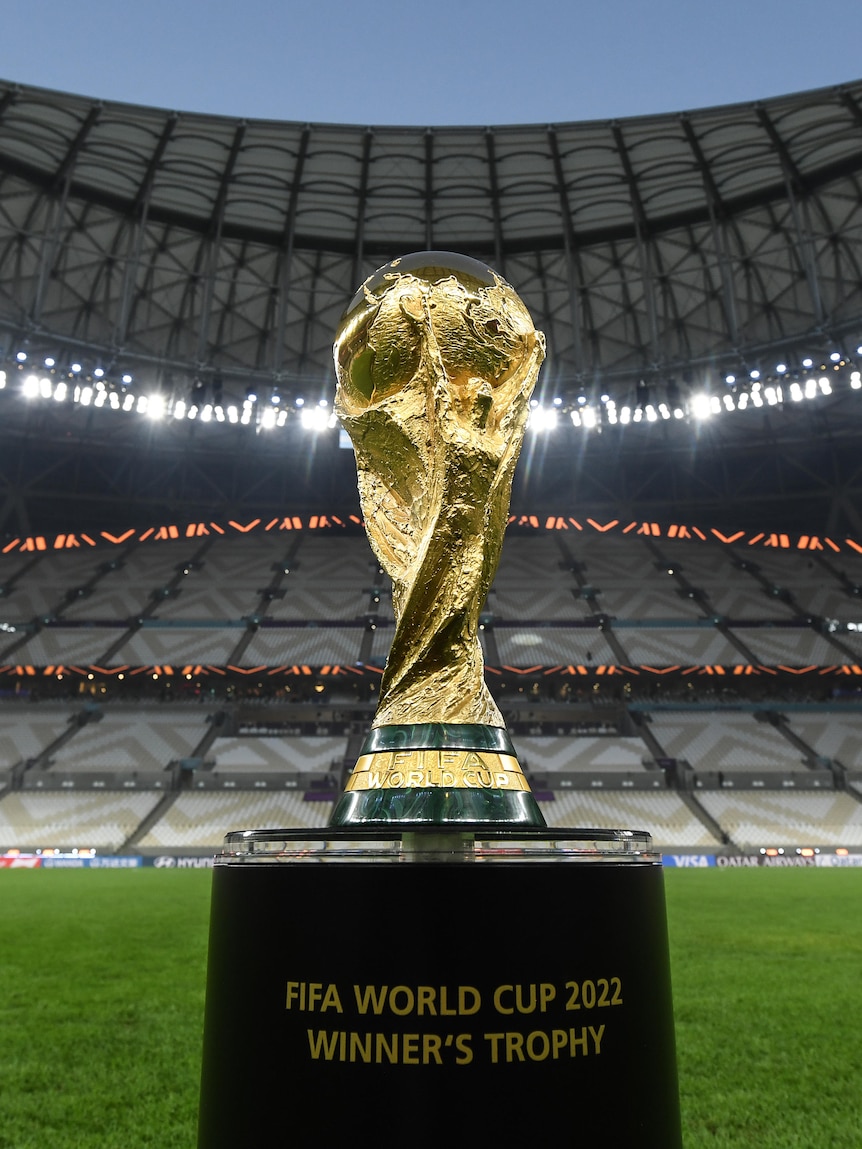 Here we are — the final, the decider, the big dance in the dystopian desert dreamscape that is the Qatar World Cup.

On Monday morning, the past 12 years of existential footballing crisis will reach its crescendo when Argentina and France walk out onto Lusail Stadium in front of a sold-out crowd of just a sniff under 90,000.

It is, in so many ways, a fairytale final.

Here is Lionel Messi, the captain and talisman of this storied football nation, the tournament’s joint leading goal-scorer, now just a single warm evening away from holding the one trophy he has never managed to win.

He will attempt to do so in front of one of this tournament’s most astonishing walls of noise, filled not only with the 35,000 fans who travelled from Argentina with spray-painted banners and drums and flags in tow, but the many others in Qatar who have become Argentinian by osmosis, absorbing the pride and hope and passion of a nation by emotional proximity to its magnetic megastar.

There is a kind of melancholy to the final from a Messian perspective. Argentina are favourites to win their first World Cup since 1986, reaching this point after playing some of the most impressive and effective football of the tournament.

Since their hiccup loss to Saudi Arabia in the opening group game, they have gathered momentum like a boulder down a mountain, barrelling past Mexico and Poland before the Socceroos offered a thicket of resistance in the round of 16.

But this team has a sense of destiny to it, as if the universe is watching them closely and urging them on. And that feeling has propelled them past the Netherlands and Croatia, and now sees them careening towards their final obstacle.

It is not just Messi who has been responsible for that: Julian Alvarez has been a revelation up front, Rodrigo De Paul a rudder in midfield, Emiliano Martinez a reckoning in goal. Head coach Lionel Scaloni has pulled Argentina out of its own shadow over the past few years, turning what felt like a hulking ship of a team into something slimmer, slicker, streamlined, built for things like this.

But for them to win it, for the narrative of Messi to reach its much-desired close, it will require the sacrifice of this 35-year-old superlative draped in white-and-blue, as if required by some ancient curse to maintain the natural balance of things. To get, you must give.

And give he has. So much of himself for so long. From the floppy-haired teenager weaving wonders in Spain to the bearded dad whose slowed-down body has become a different kind of footballing force, Messi has been this game’s North Star, the thing we have watched with wonder for almost two decades. This final, while it feels like the arrival of something, will also be a kind of departure as his starlight slowly dips from our view.

On Monday, the old dreams of Argentina come up against the new reality of France — the reigning champions, into their fourth final in what will be the past seven World Cups, the team who walked through fire in the build-up and has emerged a diamond on the other side.

They’re spearheaded by the quicksilver Kylian Mbappe, the tournament’s other joint leading goal-scorer, who feels like Messi’s heir apparent in terms of his sport-shaping aura.

But like Messi, Mbappe is just one part of this chorus. While many injuries and internal bickerings threatened to derail France before their World Cup campaign really began, Didier Dechamps has managed to pluck together a string of individuals and somehow make them harmonise.

Mbappe has been the soloist, the improviser, the jazz trumpet glinting in the light. He tore through the Socceroos in the opening group game and scored twice to muscle past Denmark in the second. He was rested for their shock loss to Tunisia in the third but re-emerged with fire against Poland, scoring twice more, before being flattened somewhat by England and Morocco.

But a couple quiet games from your soloist doesn’t throw off the band, especially when it is one conducted by the stand-out Antoine Griezmann, that ferrety little midfielder who shifts the entire sound of a game with a flick — there clearing a corner in his own box, there again connecting a triangle through the middle, there again sending a rainbow of a cross into the area for a game-deciding goal.

We have also watched renaissance of Ousmane Dembele – still young enough that one wonders how he could need a renaissance, but after his temperamental dip at Barcelona has emerged in Qatar like a guided missile – and Olivier Giroud, that Greek statue of a man who moves about as quickly as marble but who has been just as reliable, withstanding the sands of time and temperament to step into the boots of the injured Ballon D’Or winner Karim Benzema.

It has been the arrival of lesser-known players, too, like Theo Hernandez, Aurelien Tchouameni, Jules Kounde, and Dayot Upamecano, all under the age of 25 and whose performances here have surely shuffled them from the edge to the centre of this French national team moving forward.

But if you look just off screen, into the shadows beyond those four pristine white lines, this game is perfect for another reason.

Do you see how you just got swept up in the magic on the field? The players, the stories, the game that spins around them?

That is exactly what Qatar wants from this fairytale final — for us to get lost in the spectacle, to lose sight of the heat outside its air-conditioned domes, to forget, just for a moment, the silence and the suffering that put it there in the first place.

It is exactly the kind of dizzying, dazzling spectacle of a final that Qatar wanted when former FIFA president Sepp Blatter slipped their name out of that fateful white envelope in a Swiss ballroom in 2010.

Indeed, this whole World Cup has been a fairytale for Qatar on the field. There have been spectacular games and spectacular goals, brilliant talents and brilliant teams.

Unfavoured nations have shocked favoured ones, European giants falling by the wayside as teams from Africa and Asia emerged from the rubble of global football’s historic indifference.

There has been the miracle of Morocco, a group who have come to represent so much more than just themselves, the first African and Arab team to reach the final four with what felt like the love of their intersecting continents bellowing in their sails.

There has been Croatia, too, a nation with a population the size of a small Australian state but who have exceeded themselves yet again.

And then there have been the fans, who all this is meant to be for, who fill these great glimmering bowls with colour and sound, who make it feel real, who show up to forget it all and allow the rest of us to forget it all, just for a moment, too.

This World Cup has been the culmination of a dozen years of time and money, of powers soft and hard.

Its crowning glory is this final game, defined by its two hulking diamonds Messi and Mbappe (teammates at the Qatar-owned Paris Saint-Germain).

The final is a cog in the larger sportswashing machine that reaches far further than this thumb of a desert peninsula, which has been humming along far longer than we realise, and which will hum further still once this great circus has moved on.

There is an Asian Cup in 2024 to prepare for, and perhaps an Olympic Games, too. This is not the end of things. For Qatar, it is just the start.

And so they will watch this World Cup final, the two teams and the two legends who will contest it, and not care which one of them emerges with the trophy in their hands.

Because for as long as the world is glued to the game on the screen, for as long as we forget why it is happening at all, the host knows it has already won.