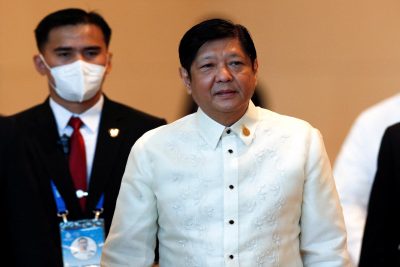 Philippines’ President Ferdinand Marcos Jr said that China has always been the Philippines’ strongest partner, a close neighbour and a good friend. He also urged the Philippines and other ASEAN members to strengthen ties with China to achieve industrial transformation.

Chinese State Counsellor and Foreign Minister Wang Yi stressed that China–Philippines relations can far outweigh territorial conflicts. He emphasised that maritime cooperation should be the main method of handling maritime affairs and ‘make the building of good neighbours, good relatives and good partners the new consensus between the two peoples’.

Beyond the rhetoric, both sides have sent positive signals and taken actions to further consolidate bilateral relations due to concerns around domestic economic interests, regional stability and geostrategic competition. This raises the question of whether China–Philippines relations can navigate into peaceful waters under the Marcos Jr administration.

The Philippines’ foreign policy has been shaped by domestic political realities and is markedly influenced by the president. Marcos Jr is the first majority president in the post-Marcos period, with a margin of almost 31 per cent ahead of his closest rivals. His success is believed to be fuelled by authoritarian nostalgia, social media propaganda and the illusion of a ‘golden age’ under the Marcos dictatorship.

Any failure of Marcos Jr to adequately address domestic challenges and strengthen public trust in his administration and himself would disturb the foundations of his domestic and foreign policies, particularly its China Policy. It is the one area of foreign policy that most easily inflames public nationalism and dissatisfaction with the government.

For his six-year term, Marcos Jr outlined a clear policy agenda that prioritised improving public health, fiscal management and reviving the long-neglected agricultural sector. He assembled well-qualified technocrats for his economic team and appointed himself Secretary of Agriculture.

Despite rhetoric around strong economic performance and the determination to normalise the price of rice, it is uncertain whether this will help the Philippines resist the upcoming global economic recession and resolve the domestic agricultural predicament. Once the rosy picture fails to be supported by evidence, the public’s loss of trust and confidence could jeopardise the Marcos Jr administration.

Since Marcos Jr assumed office, Manila has sought to re-engage with China on a multibillion-dollar infrastructure financing project. It aims to continue improving the poor infrastructure that has been the country’s development Achilles’ heel. Despite various criticisms, China and the Philippines have begun working on the technical aspects of the three flagship projects with China’s assurance and commitment. While such projects are pillars of bilateral relations, they may also become an immediate flashpoint if they infringe on sovereign rights.

According to the polling firm Pulse Asia, 89 per cent of Filipinos, up from 84 per cent in 2016, agree that the Marcos Jr administration must assert territorial sovereignty. Marcos Jr stressed that he would ‘not preside over any process that would abandon even one square inch of the territory of the Republic of the Philippines to any foreign power’.

While Marcos Jr largely endorsed former president Rodrigo Duterte’s China-friendly approach, he acknowledged that it was criticised by many Filipinos. The South China Sea was at the top of the agenda in the meeting between Marcos Jr and US President Joe Biden at the white House in September 2022. Unlike former president Duterte, who visited China five times and vowed to never to set foot in the United States, Marcos Jr, together with key cabinet members and a business delegation, visited the United States and underscored Manila’s commitment to engage with Washington.

Despite the Marcos family’s notorious human rights record, the United States considerably broadened its engagement by strengthening regional security alliances and partnerships amid China’s growing influence. After a three-year absence, the USS Ronald Reagan made its way back to Manila amid heightened regional tensions.

The turn toward the United States can be understood as a fine-tuned continuation of the Philippines’ long-term cautious hedging strategy. It also conveys a response to the fortification of China’s South China Sea artificial islands project and ambitions, while following through on Marcos Jr’s promise to protect the Philippines’ territorial sovereignty.

By deepening the Bilateral Consultative Mechanism in the South China Sea and boosting investment, Beijing hopes to win the Philippines over in the fight against ‘the alliance and hegemony based agenda led by the United States’ and ‘abuse of arbitration’. China–Philippines relations also partly depend on how successful the Marcos Jr administration is in managing domestic challenges and navigating the great power rivalry.

The Philippines will not make any substantial concessions. While making every effort to minimise the risk of conflict, the Philippines will avoid sacrificing its interests and refrain from acting as the victim of the escalating regional competition between China and the United States.

Xiangning Wu is Assistant Professor of the Department of Government and Public Policy, University of Macau.