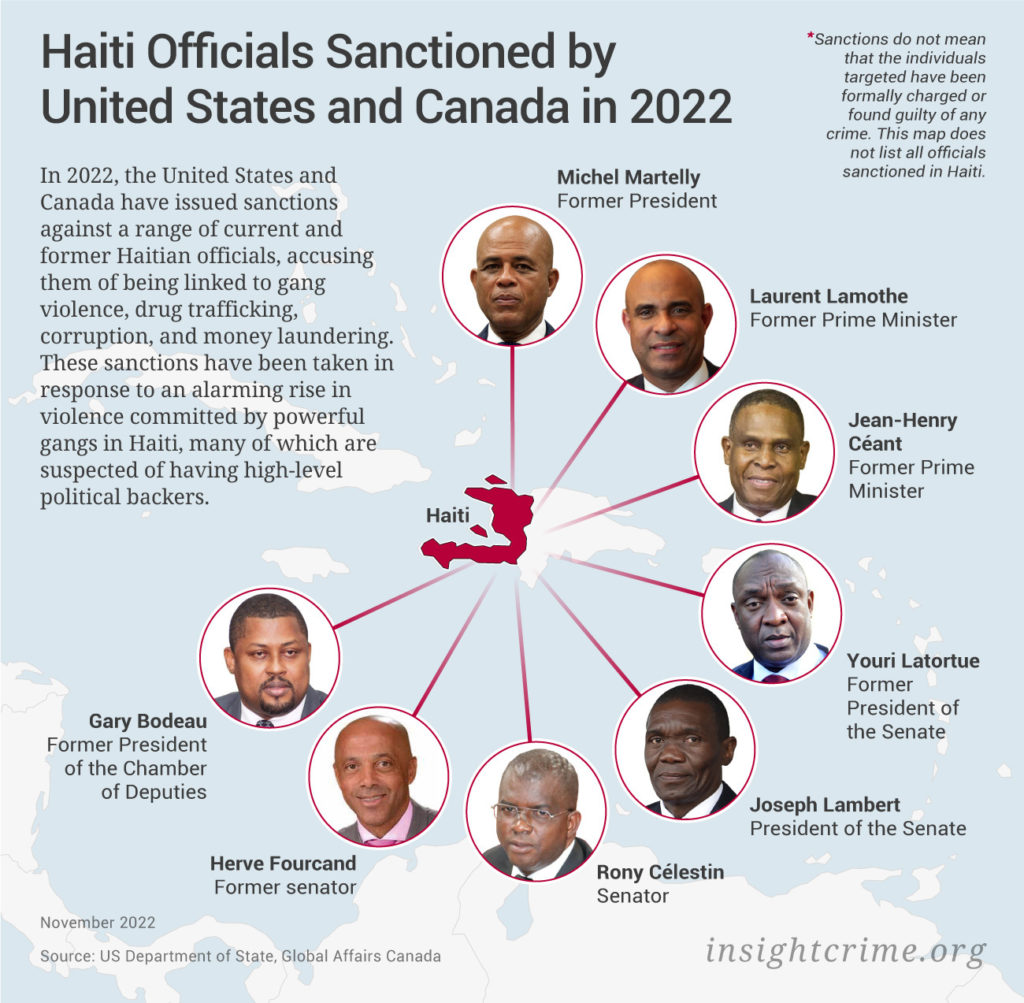 A raft of sanctions from the United States and Canada targeting senior Haitian politicians threatens to pull back the curtain on the country’s long history of patronage between political parties and violent gangs.

The government of Canada slapped economic sanctions on three Haitian politicians on November 19, bringing the total number of those targeted in recent months to eight. The three additions to the list included the most high-profile politician to date, former president Michel Martelly, who ruled the country from 2011 to 2016. He was joined on the list by his two prime ministers, Laurent Lamothe and Jean-Henry Céant.

The three men are accused of being connected to Haiti’s gangs, who have contributed to the country’s devastation through widespread violence.

“Our goal is to make sure that these people that are profiting from the violence, that are part of a corrupted system, are facing accountability,” said Canada Foreign Minister Mélanie Joly on the day the list was published. She also noted that Canada would “consider additional sanctions against individuals and entities in Haiti” in order to stop violence in the country.

Earlier in November, the United States and Canada imposed coordinated sanctions on Joseph Lambert, the current president of the Haitian Senate, and Youri Latortue, who held the same position from 2017 to 2018, for protecting gangs and of trafficking drugs from Colombia to Haiti.

SEE ALSO: How a Haiti Suburb Fuelled the Rise of a Formidable Street Gang

Rejection of these charges came quickly. In a defiant statement to Twitter, former prime minister Lamothe roundly rejected any links to the gangs and claimed he had fought insecurity.

While these sanctions do not levy criminal charges against their targets, the men involved will have any assets in the United States and Canada frozen, will be unable to travel there, and any persons or entities from the two countries are forbidden from any business activities with those sanctioned.

These sanctions are all targeting a decades-old system of political patronage and corruption in Haiti, where politicians have secured their positions by making use of street gangs in communities around the capital, Port-au-Prince. Under the orders of their political masters, the gangs routinely repressed electoral opponents, forced people to vote a certain way, collected money from extortion, or facilitated drug trafficking.

In the 1990s, this relationship was begun by then-President Jean-Bertrand Aristide. Community groups, known as baz, acted both as political movements and vigilante groups in pro-Aristide neighborhoods of Port-au-Prince. Named after local streets and suburbs, recruiting their members locally, these baz were the forebears of the street gangs devastating Haiti today.

These sanctions are the latest sign that the international community is paying attention to a decades-old patronage system between politicians and gangs in Haiti.

The curtain began to be pulled back on the inner workings of this system after the assassination of President Jovenel Moïse in July 2021. While those who ordered the murder have not been revealed, speculation took in political and business elites, security forces, and the gangs Moïse was once connected to.

In the aftermath of Moïse’s death, gang leader Jimmy Chérizier, alias “Barbecue,” became arguably the most powerful person in Haiti. Over a lucrative career as leader of a gang affiliated with Moïse’s ruling Tèt Kale Party (Parti Haïtien Tèt Kale – PHTK), he took over large parts of Port-au-Prince. Having allied a number of gangs in the capital as part of a federation known as G9 and Family (G9 an fanmi – G9), Barbecue levied his importance to the ruling political elite to increase his own influence.

Despite being a fierce critic of the fallen president months before his death, Barbecue reinvented himself as a defender of Moïse’s political legacy, even openly defying the current government of Prime Minister Ariel Henry.

Barbecue has been able to keep this act going for years now, repeatedly holding the government to ransom, such as by blockading Haiti’s oil terminal and creating a fuel crisis.

Yet he has not operated in a vacuum. His G9 alliance has been fighting the G-PEP a gang federation created in 2020 and linked to the PHTK’s opposition. The 400 Mawozo, yet another gang best known for kidnapping 17 missionaries in 2021, has carved out a formidable place for itself in the suburb of Croix-des-Bouquets and has been contacted by both G9 and G-PEP for a political alliance.

But the international community may finally be taking action. In October, the United Nations Security Council directly sanctioned Barbecue, accusing him of serious human rights abuses and threatening peace and stability in Haiti.

The recent US and Canadian sanctions are a continuation of this effort. While they have not yet led to criminal charges against these politicians, they are intended to begin cracking down on the networks that have led Haiti to its current plight.

The politicians sanctioned were carefully chosen. According to an in-depth investigation by InSight Crime in Haiti in 2021, former president Michel Martelly and his allies were connected to the G-PEP. Rony Célestin, a sitting senator sanctioned by Canada whose luxury mansion in Quebec was seized, has been connected to widespread allegations of corruption and of being involved in contraband.

Hervé Fourcand, another former senator targeted by sanctions, has allegedly been involved in trafficking weapons into the island. Youri Latortue, the former president of the Senate, has been a controversial figure for years, being accused by former US ambassadors of being “brazenly corrupt” and of running “a network of dirty cops and gangs.”

But some Haitian political insiders deny that these sanctions will have any impact. “The sanctions are a big joke. The problem with Haiti has nothing to do with senators being involved in illicit trafficking, the gangs are the problem,” said a former interior minister, who spoke to InSight Crime on condition of anonymity. “We are talking about things they have allegedly done 10, 15 years ago. The Haitian people don’t give a damn.”