It is not all sunshine: Middle East invests big in wind power | Robin Mills 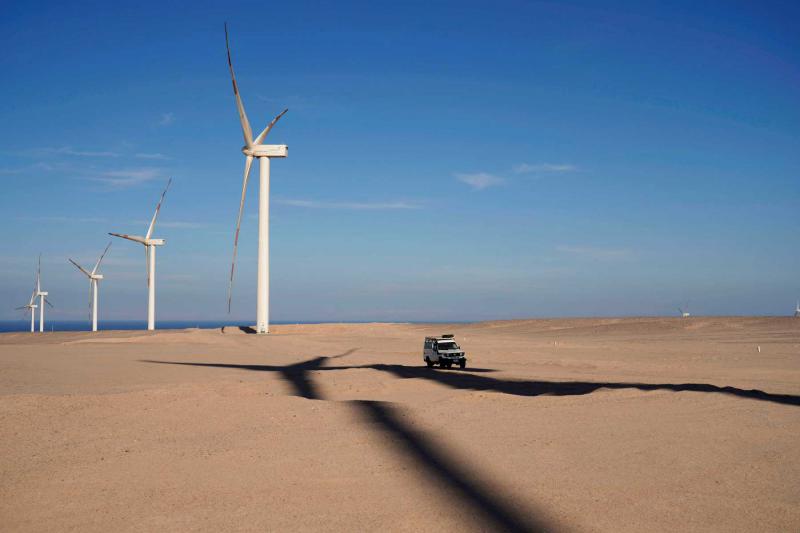 The story of renewable energy across the Middle East and North Africa is usually told from one viewpoint: the sun that beats down relentlessly on the region’s deserts. Solar is indeed a tremendous source of power and increasingly made to move electrons. But wind also blows across the Middle East’s plains, hills and seas and megaprojects are harnessing it.

The MENA region actually began using modern wind power on a commercial scale a decade before solar, with projects in Morocco, Egypt, Israel and at Tafila in Jordan, where turbines languidly turn near the ancient castle of Kerak.

But solar really took off from 2010 as costs fell. The cheapest electricity in the world is generated from solar in the United Arab Emirates and Saudi Arabia. World-scale projects such as the largest single-site solar farm at Al Dhafra in Abu Dhabi, weighing in at two gigawatts and two of the biggest multi-project locations, the Mohammed bin Rashid solar park in Dubai (five gigawatts) and Benban in Egypt (1.8 gigawatts), grab the headlines. Smaller-scale solar panels can also be placed on homes and factories.

While not as consistent as north-west Europe, there are excellent wind resources in the MENA region. Southern Morocco, the areas around the Gulfs of Suez and Aqaba in Egypt, Jordan and north-west Saudi Arabia, southern Egypt and the south-east coast of Oman are all very windy. Parts of Libya, southern Tunisia, the Algerian Sahara, inland Iran and Kuwait also have strong winds. In contrast to much of Europe, the region has wide-open spaces where wind farms are not blocked by community opposition.

Egypt, host of the COP27 climate change meeting, is capitalising most of all. With 1.59 gigawatts currently installed, 0.75 gigawatts under construction and 1.6 gigawatts planned, it has signed a swathe of projects in recent weeks. These include memoranda of understanding with Norwegian developer Scatec for five gigawatts, with the UAE clean energy vehicle Masdar for ten gigawatts and with Saudi power developer Acwa, also for another ten gigawatts.

These would be the second-largest wind farms in the world: only the 20 gigawatt Gansu in China is bigger. Acwa is already building a 1.1 gigawatt wind farm at Gebel El Zeit on the Gulf of Suez, which will be the region’s biggest when it starts up in late 2026. Egypt’s projected total of 24 gigawatts would be the seventh-largest national capacity in the world on current figures.

Wind power under MENA conditions is likely to be more expensive than solar, even if Saudi Arabia did secure a very competitive tariff of 2.13 US cents per kilowatt-hour for its first wind farm at Dumat Al Jandal (the lowest solar contract in the region was at 1.03 cents per kilowatt-hour). Wind power also takes longer to build and output is not as predictable beyond a few days.

But wind has several advantages. Most obviously, it blows at night, often more strongly than during the day. This makes it complementary to solar power. It is particularly useful on hot early autumn evenings, when people need air-conditioning even after sunset.

MENA solar power achieves a capacity factor, a source’s average output as a proportion of its peak output, of around 20 percent over the course of a year, allowing for night-time and seasons. Egyptian wind power manages 53 percent. Solar and wind in the best locations can have a combined capacity factor above 70 percent.

This high capacity factor is particularly important for the economics of green hydrogen, which depend on maximising the electrolyser’s running hours while using the cheapest possible electricity. This explains why Egypt, Morocco, Oman and Saudi Arabia have taken the regional lead in renewable hydrogen, as have other windy coastal desert countries worldwide such as Australia, Chile and Namibia.

Moreover, the higher capacity factors mean that a gigawatt of wind displaces more gas or oil consumption than solar does. Ambitious deployment of wind could see Egypt’s requirement for gas to make electricity dropping in the 2030s, as the country’s own production declines and net-zero carbon targets draw closer.

A few vital questions remain. First, where will Egypt in particular put the turbines for its enormous planned projects? The windy corridors around Sinai are relatively constrained and flanked by mountains. Areas further south on the Red Sea coast, or well inland with more difficult logistics, will have to be considered. The latest agreements do not publicly specify a location nor a timeline.

Second, will the region venture offshore, as north-west Europe has done so successfully? This brings stronger and more consistent winds and a much larger area to develop, albeit at higher costs.

Third, do current wind announcements overlap with green hydrogen projects? If not, the requirement for wind will be much bigger and the competition for good sites and equipment more intense.

Fourth, can the less blustery MENA countries, particularly the UAE, Qatar and Bahrain, make economic use of turbines optimised for slower wind speeds? And fifth, will the other windy and power-short countries that have so far made little progress, such as Iraq, Kuwait, Libya and Tunisia, start adopting the technology?

If these questions can be answered positively, the turning turbine as much as the shimmering solar panel will symbolise MENA’s energy transition.