‘It was a grind tonight’: Kangaroos survive Kiwi scare to secure spot in World Cup final 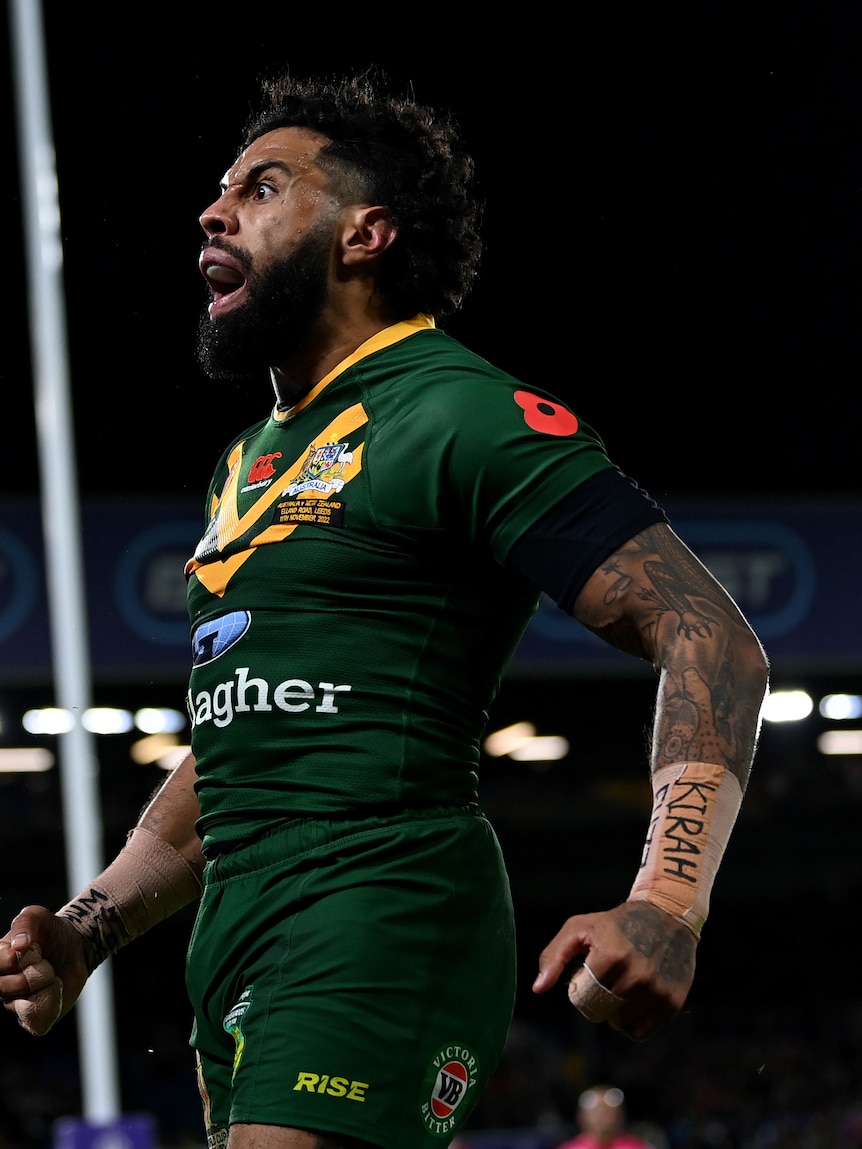 Australia’s defence of the Rugby League World Cup is alive after they withstood a spirited New Zealand to claim a 16-14 semifinal win in Leeds.

The Kiwis had endured an underwhelming tournament to date, but saved their best for last when they pushed the Kangaroos to the wire in front of 28,113 fans at Elland Road.

Next week at Old Trafford, Australia will play the winner of Saturday’s (Sunday AEDT) semifinal between England and Samoa.

The Kangaroos will need the extra day of rest given the battering they got at the hands of the Kiwis in their first trans-Tasman game since 2019.

“New Zealand didn’t allow us to do what we wanted to do,” said Kangaroos coach Mal Meninga.

“There’s improvement in us but we had to come up with some special efforts.

“It was a grind tonight, we just had to outwork them.”

One of Papali’i’s early probing runs down the left led to their opening try after 11 minutes.

Dylan Brown poked a chip-kick just short of the Australian line with Joey Manu climbing high to bat the ball back into the hands of Jahrome Hughes.

The Kiwis halfback squeezed his way over the line and winger Jordan Rapana was able to convert.

Rapana’s goalkicking has been under the microscope but was faultless when his nation needed him most.

The veteran Canberra winger was a nuisance out of his own end but had a moment to forget when he was caught off guard by the kicking game of Ben Hunt.

The Australian hooker sent a speculative crossfield kick over Rapana’s head and Josh Addo-Carr was able to score his 12th try of the tournament, matching the record set by Australian winger Valentine Holmes in the 2017 World Cup.

Nathan Cleary converted to tie the game at 6-6 before Rapana nudged the Kiwis ahead with a penalty for offside.

Holmes hit back for Australia on the half-hour mark, but a lightning-quick run from Ronaldo Mulitalo down the touchline led to Brown going over just before the break to give the Kiwis a 14-10 lead.

It was the first time Australia had conceded from open play in this tournament and meant they went in at the break behind on the scoreboard for the first time since 2015.

New Zealand went close to extending their lead just after the interval when centre Peta Hiku touched down.

Video referee Chris Kendall said Rapana had been offside and it allowed Australia to relieve some pressure and go up the other end.

They got their reward when Manu was penalised by referee Ashley Klein for lying in the ruck on the Kiwis’ line and Cameron Murray crashed over on a one-up hit-up in the 52nd minute.

Papali’i screamed in Cleary’s face after he spilled the ball and Liam Martin sparked a melee when he forced Asofa-Solomona into a loose carry.

Neither side was able to put the game to bed and New Zealand was given the strongest chance when Rapana went on a cavalier run from the backfield.

Hughes put in a grubber kick for Hiku but the ball just trickled dead along with the Kiwis’ hopes of victory.

“They put so much into it,” Maguire said.

“We’ve all been dedicated to turning up and they wanted to win for their country and they did.

“We were willing to grind, that’s the style the players are changing the jersey towards.”

Re-live the live blog below.

See you next Sunday

So, that will do it for me.

That match was a quintessential rugby league Test, starting with overwhelming skill, before turning into a brutal arm wrestle towards the end.

I think the best team won, but either result would have been justified.

So, I’ll see you next Sunday morning, dark and early for the final. Will it be Samoa or England? I’ll be cheering Toa till I’m fittingly blue in the face, but we won’t know until tomorrow.

One of the best parts of international footy is seeing these club teammates belt the stuffing out of each other during the game, then show such love afterwards.

Another pair of former Stormers — Tino Fa’asuamaleaui and Nelson Asofa-Solomona — also swapped their enormous jerseys, as did Penrith’s Nathan Cleary and James Fisher-Harris, and the Raiders’ Jack Wighton and Jordan Rapana.

So the difference was the controversial try after the ref called play on then gave a penalty?

It’s a grey area and an issue of interpretation, but the penalty was certainly harsh. Perhaps a reload of the play-the-ball would have been more fitting.

But also, Manu knew he was taking a risk and it just didn’t come off.

Australia is into the World Cup final!!

That was a brutal contest that become an absolute war of attrition towards the end, with Australia just hanging on for that 16-14 win over their old rivals.

After some high-quality football in the first half, it was just Thrilla in Manila levels of two exhausted heavyweights throwing whatever they can muster at one another. Cam Murray’s opportunistic converted try were the only points of the second half.

Befitting a game like that, Liam Martin has been named man of the match for his work on both sides of the ball.

The Kangaroos are through to World Cup final for a 15th straight time, and this game should have them match fit for England or Samoa.

He hasn’t had the most impactful game, but he’s come up with three massive plays in winning time, and none bigger than that soaring catch over Briton Nikora.

Another poor last play from Australia, with Cleary’s chip shanked out wide, and Val Holmes cleaning up, only to boot it dead ON THE FULL.

New Zealand has seven tackles, 80 metres and about 100 seconds to win this one.

Latrell Mitchell and Addo-Carr threaten out on the left, and Cleary tries to burrow through next to the posts on the last but the Kiwis defence turns up in great numbers.

Australia won’t mind handing the ball back to them right on their tryline though.

The Kiwis pinned Australia in their own half with some stinging defence.

And after the fifth tackle falls apart, Addo-Carr and Tedesco make strong metres off Hughes’s bomb.

73rd minute: Kiwis miss out on another stunner

Jordan Rapana and Charnze Nicoll-Klokstad go charging upfield! And the Kiwis are on the attack.

Hughes grubbered through for Hiku, and Addo-Carr did well to shepherd the ball towards the line. Hiku jumped over him, but it turned out he jumped from out of bounds and ground the ball on the in-goal touch line.

And then he takes a great mark over the top of makeshift centre Briton Nikora out wide. Two clutch plays from Latrell Mitchell.

Hiku, shifted to the right wing, makes a great catch on a Cleary kick. But Hughes’s las-tackle option is a chip that’s easily handled by Tedesco.

And again the ball dies with the Aussie attack on the last, with Tedesco slipping over on the fifth.

The Kiwis, from a standing start after those two big hits, have to kick from heir own 40m line, and Hughes shanks it. It almost turned into a miracle play, but Rapana couldn’t handle.

And Munster pops the loose ball to Addo-Carr, who flies 40 metres downfield before being clipped.

Cleary’s high kick is a good one, but there are no chasers. The Aussie attack still looks disjointed.

Ronaldo Mulitalo cleans up and cops a whack from Val Holmes on the ground, but it looks like he’s holding a knee. And Charnze Nicoll-Klokstad is in a bad way after a shot from Big Tino as well.

The hits have a bit more venom in them right now, as Cleary bombs high to Manu, who takes it down on one knee.

But Jordan Rapana drops it cold on his charge. Another costly handling error from New Zealand, but how costly will it be?

Cleary kicked into no-man’s land, and Wighton batted back, where Leota got a hand to the ball, giving Australia a fresh set.

Then Munster jinked across field and found Angus Crichton, who ran back infield, but Latrell Mitchell just shoved a Kiwi defender out of the way, squandering possession completely. Shocking play from Mitchell.

Australia’s short-side raid is too hot to handle for Jack Wighton, who couldn’t take the short ball from Liam Martin.

But Martin gets the ball back for Australia with a big hit on Asofa-Solomona, forcing the knock-on.

A bit of a scuffle with Penrith teammate James Fisher-Harris ensued too. A little brotherly hate.

Tino Fa’asuamaleaui is on the field and makes an immediate impact, belting a flying Joey Manu and jolting the ball loose in the middle of the field.

Brandon Smith has left the field.

Cameron Murray storms over off the penalty!

He ran through Smith, who was clearly still rattled from his tackle on Yeo. Should be checked for a concussion after that effort on Murray. Try out of nowhere.

New Zealand has a right to be angry with the penalty because the ball was played back into a Kiwis player, and Harry Grant stopped at dummy half, but Ashley Klein shouted “Play on!” so Manu hit Grant as he picked up the ball. But he was still pinged for offside. Not sure about that one, and Manu really didn’t seem to appreciate the explanation from Klein.

Cleary and Yeo combine through the middle and only Brandon Smith saves the try.

The Kiwis are penalised on the last, right in front of the posts!