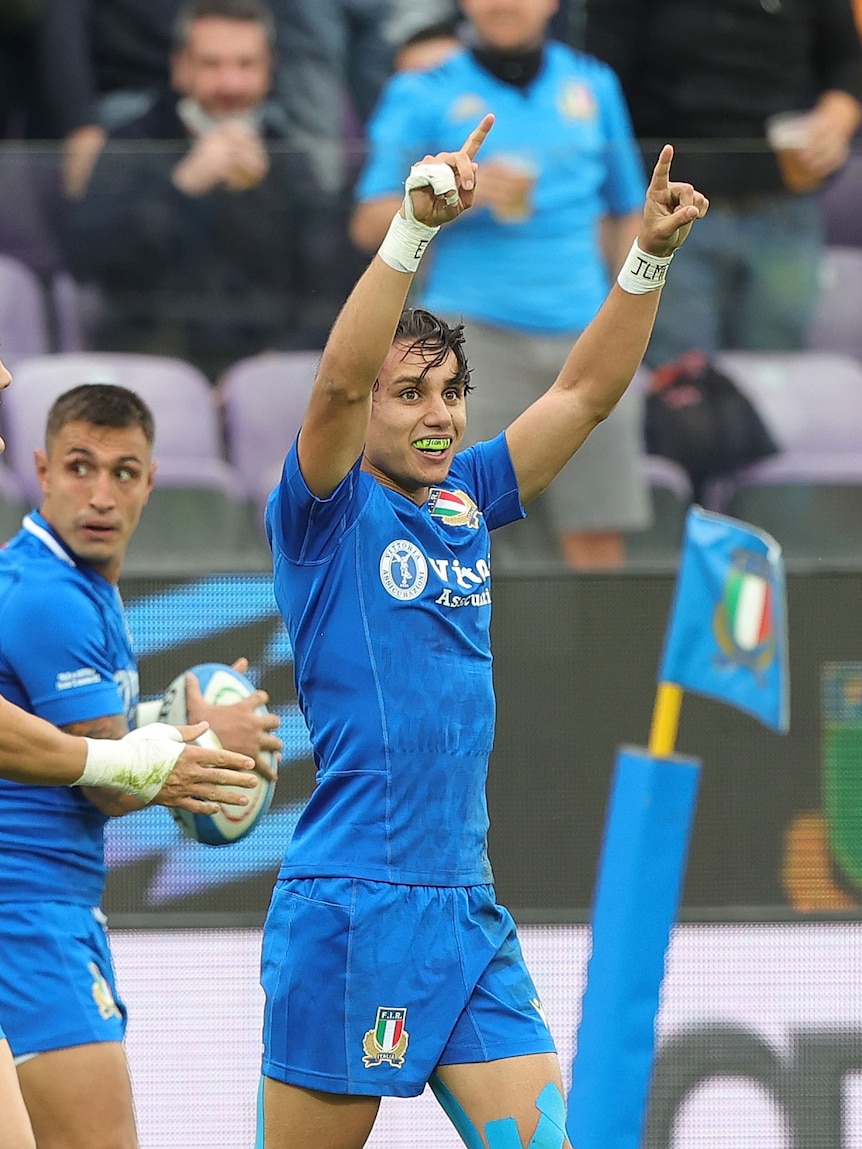 The Wallabies have fallen to a second-straight defeat on their spring tour, losing 28-27 to Italy in Florence.

After making 11 changes from the team that fell to a narrow defeat at the Stade de France, the Wallabies were again ill-disciplined and, despite having a chance to win the game at the death, were second best on the day.

Debutant Ben Donaldson had the chance to spare the Wallabies blushes by converting a late Cadeyrn Neville try to win the game, but put his effort wide of the posts, sparking jubilant scenes from the Italian players.

It was Italy’s first ever Test victory over the Wallabies — and they were well worth the win.

“I think we played with passion,” skipper Michele Lamaro told Stan Sport after the game.

“We played the first half and we put some amazing attacks in.

“I think we scored some very good tries and we’re really happy with the performance that the boys put in.”

The margin of victory could have been far more comfortable for the hosts, after they conspired to miss four penalty kicks and a conversion.

Winger Pierre Bruno opened the try scoring for Italy, who looked lively and more likely to score even before Jake Gordon received a first-half yellow card.

Livewire fullback Ange Capuozzo scored a brace either side of half time, crossing the line after some slick backline moves that belied Italy’s reputation as 6 Nations whipping boys.

Australia hit back through Tom Wright in the first half to trail 17-8 at the break.

The tourists then added scores from Fraser McReight Tom Robertson and Neville as Australia outscored the Italians four tries to three.

“I think you’ve just got to give credit to Italy,” Wallabies captain Allan Alaalatoa said.

“They came out firing in the first half, they played with a lot of passion, put us under pressure on the scoreboard early.

“I was still proud of the effort from the boys to come close to coming away with the win, but we just weren’t good enough at the back end there.”

The Wallabies gave away 16 penalties in the game, serving not only to offer opportunities that Italy largely spurned with the boot, but also stymied their own attacking efforts.

“It’s something that we’ve been speaking about as a team,” Alaalatoa said.

“But we need to be better at as well.

“Our discipline didn’t allow us to get out of our own end.

“As players we need to be better through our actions.”

Australia take on the world number one ranked Ireland side in Dublin next week, before finishing the five-match tour against Wales in Cardiff.