Marcos Jr fashions a flexible foreign policy for the Philippines 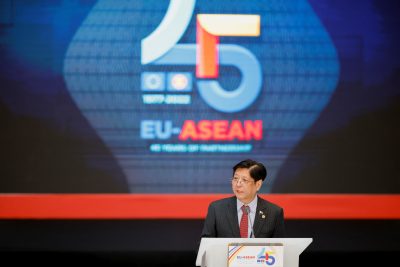 During the 2023 World Economic Forum Annual Meeting in Davos, Switzerland on 16–20 January 2023, Philippine President Ferdinand ‘Bongbong’ Marcos Jr declared his foreign policy of not choosing sides amid the growing major power rivalry between the United States and China. He stressed, ‘I don’t work for Beijing, I don’t work for Washington DC, I work for the Philippines…to promote [its] national interests’.

When Marcos Jr took his oath of office on 30 July 2022, he had already announced a foreign policy that echoed the approach of his predecessor, former president Rodrigo Duterte, of being ‘friendly to all and [an] enemy to none’. This policy aims to advance Philippine national interests by avoiding armed conflicts, pursuing cooperation and promoting international peace and security amid rivalry between the United States and China.

In his inaugural speech, Marcos Jr set the tone of his foreign policy. He noted that ‘[w]e seek friendship with all. And if the great powers draw the wrong lessons from the ongoing tragedy in Ukraine, the same dark prospect of conflict will spread to our part of the world.’ He went on, noting, that the Philippines ‘shall seek, not scorn dialogue’ with other countries equally.

The Philippines and the other founding members of ASEAN — Indonesia, Malaysia, Singapore and Thailand — have all practiced a flexible foreign policy before.

Flexible foreign policy enables states to bend with the wind to survive. This helps states adapt to changing geopolitical realities. Flexible foreign policy is pragmatic. Hardline political ideologies do not guide strategy and only national interests are put first. The cardinal rule in international politics that ‘there are no permanent friends nor permanent enemies but only permanent interests’ informs this kind of statecraft.

Marcos Jr administration’s balances its relations with the United States and China in this way.

The new president’s first overseas visit was to Indonesia on 4–6 September 2022. This was followed by a visit to Singapore on 6–7 September. Both Indonesia and Singapore have a record of applying a flexible foreign policy based on a hedging strategy. Marcos Jr’s visits to the two countries reflected his preference to adhere to the ‘ASEAN way’ of dealing with major powers. The trips also signalled that ASEAN sits at the centre of Philippine foreign policy.

Marcos Jr also travelled to New York to speak at the 77th United Nations General Assembly in September last year. This trip provided him another opportunity to convey his administration’s foreign policy of being ‘friend to all and enemy to none’ to the world.

On the sidelines of the assembly, Marcos Jr met with US President Joe Biden. He indicated the continuing importance of the United States in Philippine foreign policy. In this meeting, Marcos Jr candidly declared that ‘we have always considered the United States [as] our partner, our ally, and our friend’ adding that the Philippines continues ‘to look to the United States for… the maintenance of peace in our region’. Pundits argued that Marcos Jr was pivoting to the US and drifting away from China — but the president was in fact playing the ‘American card’ as part of its flexible foreign policy.

On the sidelines of the 29th Asia Pacific Economic Cooperation Economic Leader’s Summit in Thailand on 18–19 November last year, Marcos Jr met China’s President Xi Jinping. Both leaders agreed to promote friendly consultations between their countries, particularly on territorial conflicts and maritime disputes in the South China Sea. Marcos Jr had a state visit to China on 3–5 January this year and has plans to visit to the United States in June.

Marcos Jr’s flexible foreign policy has two distinct benefits for the Philippines. First, it reaffirms the Philippine–United States alliance to meet Manila’s security requirements. And second, it enhances Philippine relations with China which could have an economic payoff and help enable a post-pandemic economic recovery in the Philippines.

Though sustaining a flexible foreign policy will be a challenge amid a zero-sum geostrategic environment. How flexible Marcos Jr’s government can be with its foreign policy when national interests are at stake remains an open question.

This article is part of an EAF special feature series on 2022 in review and the year ahead.