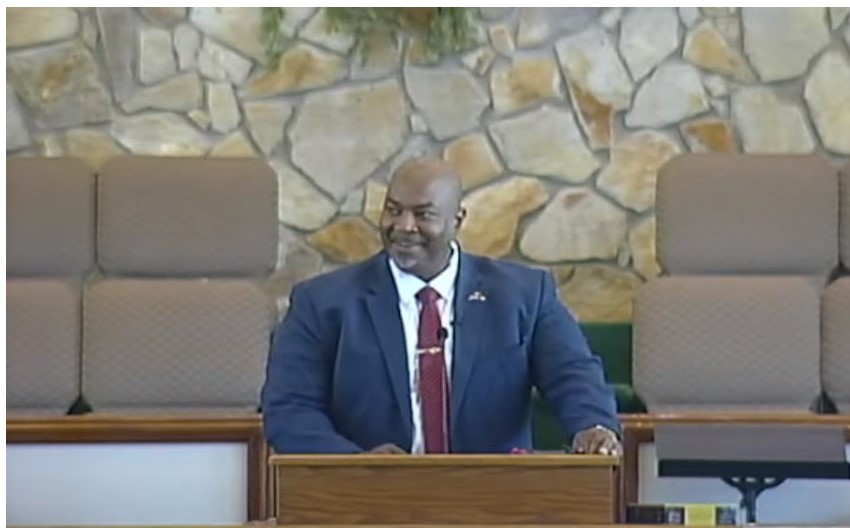 Mark Robinson, the Republican firebrand Lt. Governor of North Carolina, preached at the Berean Baptist Church recently and trashed the LGBT movement that seeks to change churches by rebelling against people’s spiritual faith in the word of God.

Robinson, an American First proponent, is one of the few public figures who will brazenly push back on the left’s agenda to transform American institutions and completely ignore the consequences to his political image.

In the following video, Robinson pointed out that the danger he sees of hurting the American church comes from within the religious institutions around America.  He said it plainly to the congregation, “there are two problems in the country- politicians and pastors.”

Robinson was in rare form Sunday at Berean, telling those gathered, “I’m talking to the camera right now, and I’m talking to the news media. I want you to know that I am the lieutenant governor, and it was the people of North Carolina who voted for me, but I have been ordained by God to be here.”

Robinson was characteristically unafraid to single out Christians and speak directly to them, using Biblical references from his King James Bible.

“Christians. We have become so weak,” he said, giving numerous examples of Americans allowing the teachings of Jesus to be ignored.

Robinson mentioned a recent story he read on social media, using it to highlight a real problem he has seen in the church with transgender people and homosexuals.

“I saw on social media that a church had a Drag Queen preacher,” he said, adding:

“I’m no whole fuddy-duddy; I know people like to fly their flag. I say go do your thing! People used to go to work and do their job and, you know, go and do their the job or whatever, then they’d go home and close the door, bam, and do their thing, and then come back out in public.

Now -Nobody can’t just go home and do that thing. Everybody got to bring their thing into the wrong place.

“I’m mature enough to give you your space and do what you want to do. Why you can’t give me my space to have what I want here in the church?  Why do you think you need to come in here and pervert those kids? Why would the pastor think that it’s all right for it to happen,” he said.

Robinson didn’t say exactly who he was referring to; however, there are a few hints that he could have been talking about an October story in the Christian Post about the United Methodist Church in Florida that invited a man dressed in women’s clothing to preach a sermon with children who were seated next to him.

That preacher is a professional ‘change agent to the church’.

According to the transgender preacher- on his website: “Church can be a Drag…At the Intersection of Queerness and Spirituality dwells the Minister in Drag: Ms. Penny Cost”

It is Ms. Penny Cost’s mission to create spaces for deep, difficult, divisive, yet divine conversations around queerness and spirituality. The Love of the Divine flows forth, in new and powerful ways, to new and incredible people: people who have been told they are unreachable, unknowable, and unholy.  She prays that the tomorrow which we are all creating, will be made more just, more equitable, and more inclusive, by each of our actions today.

From the Oct. CP article about Penny Cost:

Allendale UMC Senior Pastor Andy Oliver said he invited Isaac Simmons, who performs in drag as “Ms. Penny Cost,” to deliver the sermon on Oct. 2 because he wants “all people to see people like themselves called by God to preach the Gospel.”

In a Facebook post, Oliver wrote that Simmons — who was seen in a video clip of the service wearing a wig and a sequin dress — was “an angel in heels appearing to shepherds in the fields on the night shift, telling them that Good News had arrived on their doorstep.”

Oliver compared the decision to have a drag queen teach during Sunday service to other churches’ “putting a flag on your altar,” and called Simmons “an incredible preacher, grounded as Allendale is, in Wesleyan and liberation theology.”

Mark Tooley, the president of the Institute on Religion and Democracy, believes drag queens like Simmons are becoming the “new public face of United Methodism.”

“His children’s sermon and role in the Eucharist at a Florida church showcase how drag ministry will now become mainstream in the denomination,” Tooley told The Christian Post in an emailed statement. “To my knowledge, no United Methodist official, including Simmons’ bishop, has publicly expressed concern about this United Methodist drag queen.”

For Tooley, Simmons and others like him are among the reasons that United Methodism, which, as Tooley put it, “has never enjoyed a single year of growth in its 53 years, is imploding.”

“Traditionalists have been given a one-year window to withdraw from the denomination with church property,” he said. “Thousands of congregations are doing so.

At one point during the Allendale church service, after a worship band performed a song with the lyrics “We are building up a new world/ we seek justice for all people,” two young girls wearing face coverings were seated behind Simmons as Oliver asked him about his dress.

“Are you always dressed up like this?” asked Oliver.

Simmons replied, “I wish!” adding, “No, I only get dressed up like this on special occasions.

Heyy y’all should come out tomorrow night at 7 pm to meet Ms. Penny Cost!! she uses drag as a way of welcoming queer spirituality and changing the institution of the church 🙂 pic.twitter.com/pl8WXRSJmM

Activists admit that the Drag Queens in the church are to change the church- and it appears Mark Robinson is one of the few people brave enough to take about what people are really thinking.