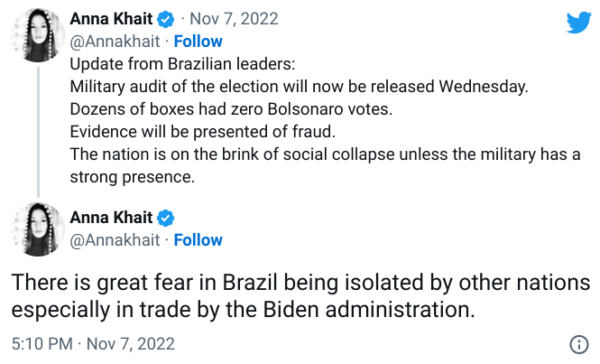 Brazilian military leaders are reportedly preparing to release evidence showing the nation’s recent presidential election was rigged, and that far-left candidate Luiz Inácio da Silva, known simply as “Lula,” is being illegitimately installed as President – with the full backing of the globalist world order and Chinese Communist Party.

Much like America following the hotly-contested 2020 election, Brazil has been thrust into chaos after the reported defeat of President Jair Bolsonaro, widely known as the “Trump of the Tropics.” The Brazilian military, which has played a key role in the election’s aftermath, is reportedly set to release the results of their election audit on Wednesday, and early indications say that it will expose massive levels of election fraud.

“Military audit of the election will now be released Wednesday,” she wrote, before revealing some of the alleged fraud and extreme irregularities discovered by Brazil’s military, drawing startling comparisons to America’s 2020 election.

“Dozens of boxes had zero Bolsonaro votes. Evidence will be presented of fraud. The nation is on the brink of social collapse unless the military has a strong presence.”

“There is great fear in Brazil,” Khait went on, saying the nation’s leaders worry they’ll be “isolated by other nations especially in trade by the Biden administration.”

The audit information came “from a very trusted source in Brazil,” Khait added.

Brazil’s election, which pitted populist Jair Bolsonaro against far-left Lula and divided the nation much like America’s 2020 race, has been scrutinized the world over for its highly irregular results. As reported by National File, ballots deemed “invalid” outnumber Lula’s alleged margin of victory in the electronic election by millions of votes.

The military audit results appear poised to directly counter the claims of Brazil’s Federal Accounts Court, which is under left-wing control and ran an “audit” of its own, quickly concluding that zero fraud or irregularities had occurred.

In the aftermath of the election, Brazilian citizens have taken to the streets in protest, being joined in some cases by policemen and soldiers, who say they’re stepping up to defend the nation’s constitution in the midst of an attempted left-wing coup.

As Brazilian citizens plead for federal forces to intervene, and halt Lula’s takeover, massive pro-Bolsonaro demonstrations have continued. In some cases, truck drivers and other citizens have blocked major roadways and even the entrances to airports, demanding action to correct what they say has been as a massive election theft.

In addition to the soon-to-be-revealed military audit results, National File has exposed the role of the Chinese Communist Party and their Epstein-tied influence operations in Brazil’s contested election, which has been equated to a communist takeover of the South American nation.

As National File exclusively reported, Lula is directly tied to some of the most prominent communists on earth, with links not just to Communist China, but the massive Communist Party apparatus of the former Soviet Union.