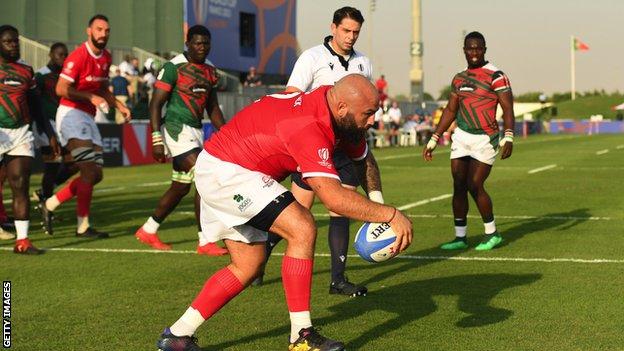 Kenya’s hopes of reaching the 2023 Rugby World Cup were ended as the 14-man Simbas were thrashed 85-0 by Portugal in Dubai.

A second successive heavy defeat in the qualification tournament means the east Africans can no longer seal the last place at next year’s finals in France.

Portugal ran in five converted tries in the first half, and Kenya’s distant hopes of a comeback were effectively over when Brian Juma was sent off in the first minute of the second half.

The lock was dismissed for a dangerous tackle on Manuel Cardoso Pinto, receiving his second yellow card after being sin-binned in the first half.

A clinical Portugal side proved too quick and troublesome for the Simbas backline, crossing a further six times at the Sevens Stadium and also being awarded a penalty try.

The defeat is Kenya’s biggest ever in a Test match, surpassing their 84-12 loss to Namibia in 2006.

Portugal have won both their games in Dubai with a bonus point and are set for a deciding match against the United States, the top-ranked side in the qualifier, on Friday.

The winners of the tournament will go into World Cup Pool C next year alongside Australia, Fiji, Georgia and Wales.

The USA have competed at eight of the previous nine World Cups, while Portugal featured at the 2007 tournament in Wales.

Kenya were thrashed 68-14 by the United States in their first game of the round-robin last Sunday, with hooker Dylan Fawsitt and wing Christian Dyer both scoring hat-tricks for the Americans.

Simbas coach Paul Odera made eight changes for the match against Portugal, with regular captain Daniel Sikuta ruled out with a concussion.

Two early tries from hooker Mike Tadjer gave Portugal control but Kenya looked to be back in the match when Brian Tanga rounded off a counter-attack in the 14th minute.

However, the scrum-half’s try was ruled out for a knock-on in the build up and scores from Cardoso Pinto, Jose Lima and Vincent Pinto took the game away from Kenya as Juma spent time in the bin.

Juma’s sending-off soon after the restart compounded Kenya’s struggles, with Pinto grabbing his second try before a double by Tomas Appleton.

Efforts from Jose Rebelo Andrade and Joao Belo either side of a penalty try followed and, after Kenya were reduced to 13 men for the final four minutes when Geofrey Okwach was yellow-carded, Lionel Campergue rounded off the scoring for Portugal.

Kenya’s afternoon was summed up when debutant Amon Wamalwa seemed set to score in the corner from a kick forward in the last minute, but the fly-half knocked on just inches away from the tryline.

The east Africans have never qualified for the Rugby World Cup, and will round off their group campaign against Hong Kong on Friday (13:00 GMT).