The ‘Ndrangheta Connection to Colombia’s Paramilitaries 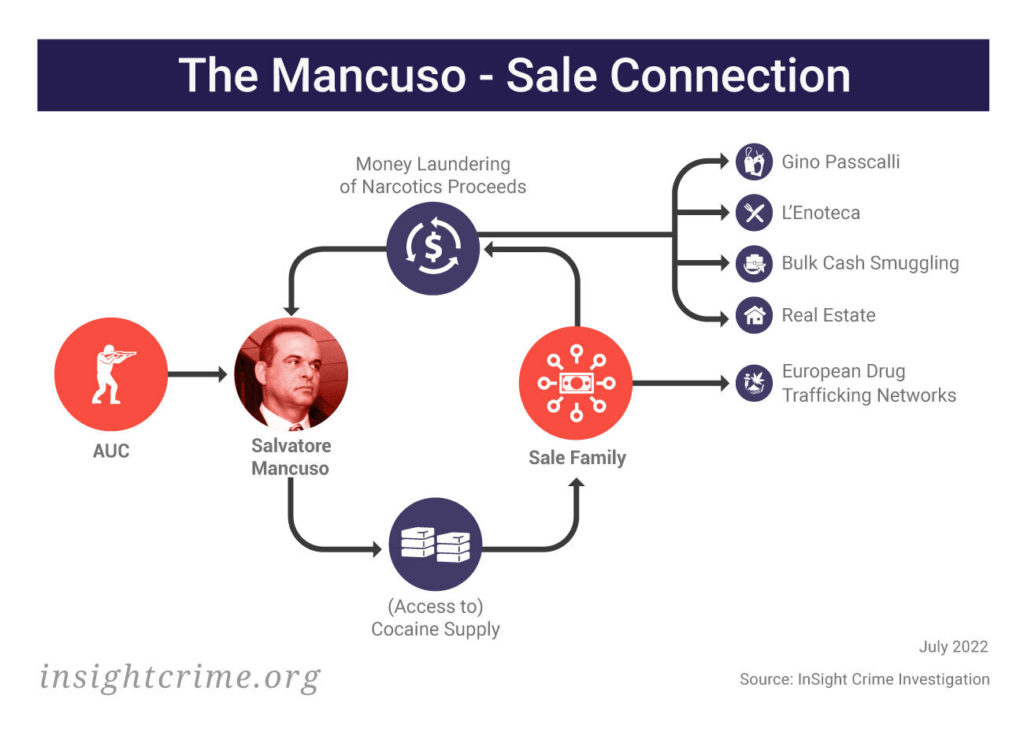 Salvatore Mancuso, one of the most powerful paramilitary commanders in Colombia, and Giorgio Sale, a well-connected Italian businessman, helped each other become rich men.

In the late 1990s and early 2000s, the two became lynchpins of a connection between the ‘Ndrangheta, Italy’s largest mafia group, and Colombian paramilitaries, which lasts to this day.

Mancuso headed the United Self-Defense Forces of Colombia (Autodefensas Unidas de Colombia – AUC), which controlled vast areas of coca production across the country. The paramilitary group needed buyers for cocaine and partners to launder the immense wealth they were accumulating, and Mancuso set out to find them.

Giorgio Sale was the perfect partner. He was an Italian entrepreneur with plentiful investments all over Colombia and a good reputation among the South American country’s upper classes. His businesses included the luxury clothing company Gino Passcalli, which had dozens of stores and employed over 600 workers. He counted several judges on Colombia’s Supreme Court among his circle of friends. And his fine-dining restaurants were focal points for the societal elites of Colombia’s main cities.

One restaurant, in particular, stood out. L’Enoteca, in the city of Barranquilla on Colombia’s Caribbean coast, offered an array of expensive wines, refined foods imported from Italy, and dishes that cost $150 — more than Colombia’s minimum monthly wage at the time. The restaurant was also financed by Mancuso to the tune of $3 million and was instrumental in laundering the AUC’s dirty money, according to Colombian court records.

In addition to providing a money laundering outlet for the AUC, Sale would also regularly send cash the AUC earned through drug trafficking from Europe back to Colombia using human carriers. In 2002, several Italian citizens were arrested as they entered Colombia at Bogotá’s El Dorado International Airport carrying sums of between $120,000 and $150,000 that allegedly belonged to the Sale family.

Giorgio Sale and his sons — David, Stefano, and Cristian — also proved useful cocaine trafficking partners to the AUC. During testimony to a United States court following his extradition in 2008, Salvatore Mancuso declared that Cristian Sale was in contact with Gerson Álvarez, alias “Kiko,” a paramilitary leader from whom the Sales would buy cocaine to introduce it into European countries, including the Netherlands, Spain, and Italy.

This relationship would be pivotal in ensuring a steady flow of cocaine across the Atlantic and in allowing the ‘Ndrangheta to dominate much of Europe’s cocaine trafficking, as a commission of Italy’s parliament concluded in a 2008 report.

“The ‘Ndrangheta has been able to create a solid business relationship [with the AUC], which allowed it to climb towards ‘majority’ control of the entire system linked to the trafficking of Colombian cocaine [into Europe],” the commission found.

Collaboration made both Mancuso and Giorgio Sale rich. And the trans-Atlantic ties they built would outlast the unraveling of their relationship.

The vast quantities of cocaine Mancuso and Sale moved had caught the attention of the United States. Meanwhile, Colombia’s government had opened peace talks with the paramilitaries that would eventually lead to the AUC demobilizing its forces.

The United States charged Mancuso with drug trafficking in 2002 and requested his extradition. Colombian authorities initially accepted the extradition request but later suspended it, wanting to finalize the peace process first.

Between 2003 and 2006, the AUC officially disbanded its forces. According to the deal they brokered with the Colombian government, their leaders would face reduced sentences if they confessed their crimes.

In 2005, Mancuso became one of the first AUC leaders to turn himself in. In December 2006, he confessed to his role in massacres, corruption, and drug trafficking. And in May 2008, after Colombian authorities accused him of breaking demobilization conditions, he was extradited to the United States.

Faced with a lengthy potential sentence in US prison, Mancuso turned on his former partners, testifying in 2009 against Giorgio and Cristian Sale, who had already been arrested on drug trafficking charges in 2006 as part of an international operation.

While Sale and Mancuso’s relationship laid the foundation for an ongoing cocaine trafficking partnership, their downfalls had little impact on the ‘Ndrangheta’s activities because neither the paramilitaries nor the ‘Ndrangheta clans dealt exclusively with each other.

The connection also survived the demobilization of the AUC. Vicente Castaño, one of the founders of the AUC, broke away from the demobilization process in 2006 and rearmed, creating the group that would morph into the Urabeños (who call themselves Autodefensas Gaitanistas de Colombia – AGC, and are also known as the Gulf Clan (Clan del Golfo) — a criminal organization that would become one of Colombia’s greatest drug trafficking powers.

Today, several ‘Ndrangheta clans maintain alliances with the Urabeños, but they are in no way limited to this one supplier.

“There is no such thing as a singular mind of the ‘Ndrangheta, which decides who to deal with, [there is] no exclusivity with anyone,” Anna Sergi, professor of Criminology at Essex University, and author of the recently published book Chasing the Mafia, told InSight Crime.

As in the days of Mancuso and Sale, it is independent brokers who connect the two networks. Miro Rizvanovic Niemeier, a German citizen born in Bosnia and who spent time in Colombia, was arrested in Italy in 2017 and murdered in Colombia a year later. Colombian Jaime Cano, alias “Jota,” was arrested in Medellín in 2021. Both were believed to be independent brokers who provided a link between the Urabeños and the ‘Ndrangheta.

Recently, authorities’ crackdowns on both sides of the Atlantic put pressure on the ‘Ndrangheta clans and the Urabeños.

In June 2022, a year-long transnational police operation between Colombian authorities and multiple European counterparts, particularly the Italian police, ended with the arrest of 38 suspect drug traffickers and the recovery of 4.3 tons of cocaine. Those arrested belonged primarily to the Urabeños and the ‘Ndrangheta.

And in October, authorities raided the Italian port of Gioia Tauro and dismantled a ‘Ndrangheta network that would import up to 30 tons of cocaine a year from the port of Turbo in Colombia, an Urabeños stronghold.

In Colombia, the Urabeños still control most of the drug trafficking routes out through northern Colombia and are still reliable connections for the ‘Ndrangheta. However, their power also appears to be diminishing, especially since the 2021 arrest and extradition of their talismanic leader, Dairo Antonio Úsuga, alias “Otoniel.“

These blows, however, are unlikely to put an end to a decades-long connection. Time and again, the ‘Ndrangheta clans have proven the resilience of their flexible, broker-based model.