Three worlds overlap in Mexico’s new fentanyl capital, where violence and synthetic drugs are bound dangerously together. Addicts, journalists, and police navigate a city in disarray.

A dried-up canal slices through the heart of Tijuana, a streak of negative space in a city where every other square foot appears to be claimed. The canalización, as people call it, is a place now emblematic of the city’s ills, an underworld in plain sight.

The Canalización
The chaos has spilled outward across Tijuana. There have been 1,900 homicides here this year so far, making it the deadliest city in Mexico. It is a place where language has adapted to new forms of violence, macabre and hyper-specific. The word “encobijado,” for instance: a murder victim wrapped in a blanket.

Propelling that violence is a shift in the drug trade. Tijuana has long been a major transit point for illicit goods into the United States: alcohol during Prohibition, waves of marijuana and cocaine after that. Now, it is a city of fentanyl. It is the most prolific trafficking hub into the United States for the drug and, increasingly, a city of users.

It is their lifeless bodies that paramedics find on the streets. They are just as frequently victims of overdoses as violence. The turf war between local drug dealers has provoked a nightly shock of killings.

The Washington Post followed the fentanyl epidemic from Mexican labs to U.S. streets.

The crisis has penetrated unlikely parts of Tijuana. Fentanyl labs have been disguised as piñata shops. Traffickers have turned modern townhouses into drug warehouses.

Men emerge, zombielike, between downtown restaurants, seeking available drugs wherever they can find them.

He woke up next to a pile of trash two blocks from the U.S.-Mexico border, on a patch of sidewalk that has been claimed by this city’s fentanyl addicts, almost all of them deportees from the United States.

José González folded his blanket on the concrete and checked to see whether anything had been stolen from him while he slept. Most of the men around him — he’s careful not to call them friends — had already taken their first hit of the day. They stared blankly ahead or at the ground, oblivious while José inventoried his things.

“This goddamn place,” he said.

José had been the starting right tackle at Redlands High School outside of San Bernardino, Calif., a teenager who had passed as all-American until his friends learned that he was undocumented, brought to the United States as a 4-year-old. By the time he was deported at 23 for selling drugs, he had a girlfriend and a daughter in San Bernardino. His English was far better than his Spanish.

Not that anyone in Tijuana cared about his biography. Not the cops, who had arrested him 12 times for violations as minor as loitering, sending him to jail for a day or two at a time. Not his junkie neighbors, who had once again, it seemed, stolen his stuff while he slept.

He had remained here after being deported in 2013 to be close to his daughter in California. He kicked his drug habit. He got a job at a call center. He bought a closet full of button-down shirts.

But after a few months — alone and depressed — he began using again. At first, it was a few hits of heroin every few days before work. By 2020, though, fentanyl had displaced almost every other drug in Tijuana.

The first time he tried fentanyl had been a revelation; a shimmering crack in the universe into which he tumbled. Since then, addiction had reordered his life. He sometimes spoke of his own descent as if it were happening to someone else, a vortex of bad decisions that at 32 he couldn’t pull himself out of.

“Why would my daughter want to visit her drug addict father?” he asked. She had visited him once and never came back. “What the hell am I doing here?”

It was a Friday morning. Children in their school uniforms walked by José’s encampment on their way to school. He had just enough fentanyl to avoid the ache of withdrawal. Because he’d run out of visible veins, he asked a friend to inject the needle in his neck. He bent down to receive it and put his hands on his knees while the high rushed in.

In another five hours, he would be strung out, hurting for another hit. He needed to make 100 pesos (about $5) to buy enough drugs to fill another syringe. He started loading his backpack full of scavenged items to sell in downtown Tijuana: iPhone cases, a calculator, a dictionary, a used pair of shorts.

Every day was the same cycle, a hustle he had regimented. Make enough cash to buy drugs; do the drugs; maybe find some food; start over again. This day was no different.

Except it happened to be a particularly hot one, and the smell of trash wafted over José’s patch of sidewalk.

Except he was losing weight, his pants slipping off his waist.

Except for a more immediate problem: what José had for sale — much of it was garbage.

He threw on his black backpack, its zipper broken, and walked past the row of encampments that have sprung up on the outskirts of downtown Tijuana. A block of strip clubs and bars glittered in the distance.

His best chance at earning the 100 pesos, he thought, was a Victoria’s Secret pouch he had found with some skin-care products. The words “Love Made Me Do It” were scrawled below the zipper. He headed to a block lined with prostitutes and presented it to the women, who fanned themselves in the shade. Most of them shook their heads at José’s attempt. Some just stared ahead blankly. 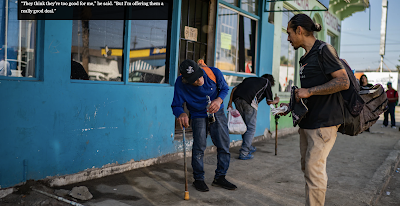 “They think they’re too good for me,” he said. “But I’m offering them a really good deal.”

He walked across the street and carefully arranged his wares on a black tarp. He pulled out used medical goggles, an extension cord, watch bands, an array of used phone cases. Around him, other people had set up their own items for sale. 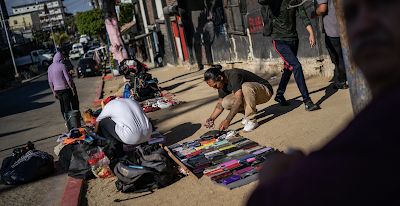 A young man came up to him.

“You know where I can score?” he asked.

José could tell he was a meth user, so he told the man where the meth dealers worked.

He had come to know the city’s panorama of addicts: where different kinds of junkies scored their drugs, how to treat them if they overdosed. It happened all the time. 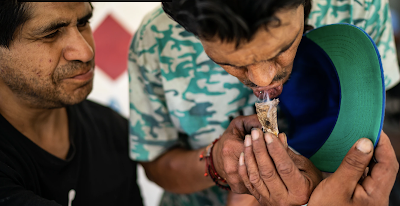 He had saved four people from fentanyl overdoses by using naloxone, a medication that reverses the effect of opioids. It is regulated asa controlled substance by the Mexican government and is almost impossible to find legally outside of several hospitals. But American nongovernmental organizations began smuggling it into Tijuana as overdoses mounted. 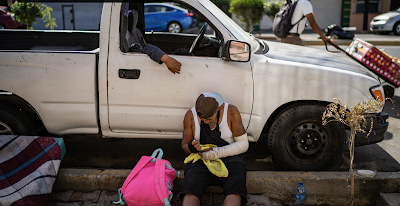 José usually kept a bottle in his pocket. Even though he had built up a tolerance to fentanyl, he knew one day he might be the one who needed to be revived.

Hours passed with barely any customer interest. He could feel his body asking for another hit. He decided to return to his encampment for a few items he had left behind, hoping they would improve his sale. He packed everything up. Walking back, he started to feel worse.

José paused at an intersection, his forehead dotted with sweat.

“Sometimes I just want to turn myself into a rehab. I’m getting tired of this.”

He scratched his left forearm, with the tattoo of his daughter’s face as a 4-year-old, when he last saw her. She was 12 now. A different person, he thought.

He kept walking, now a little slower, trying to sell a few things on the way back to his block. A woman stopped him, introduced herself and asked a question.

“Why do you need the money?”

“To be honest,” he said, “for a cure,” referring to the fentanyl hit.

“You’re too young to be using,” she said. “You know, they have meetings to help people with problems like that, three times a week.”

José thanked her and started walking away. It was the kind of intervention that rarely occurred in this part of Tijuana.

He said her name out loud: “Beatriz.”

“Everything happens for a reason,” he said, “even meeting her.” 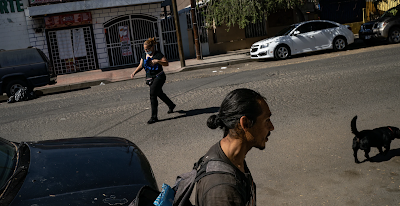 He had tried twice to get clean, but maybe, he thought, it was time to try again.

Or he could work the streets again, trying to sell more stuff. He could let the universe decide if he deserved another hit.

“Everything happens for a reason,” he said again, even though it was rarely clear what the reason was.