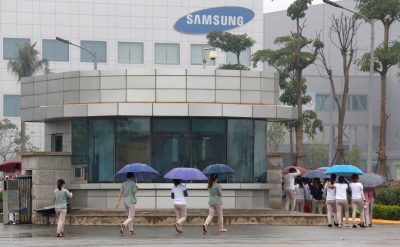 The CEO of Samsung Electronics met with Vietnamese Prime Minister Pham Minh Chinh and announced a US$850 million investment to manufacture semiconductor components in Thai Nguyen province on 5 August 2022.

The investment will make Vietnam one of only four countries — alongside South Korea, China and the United States — that produce semiconductors for the world’s largest memory chipmaker. Vietnam’s selection over more developed locations speaks volumes about the country’s rising importance in the semiconductor value chain.

Yet the desire to enter the global semiconductor value chain lives on. For Vietnamese leaders, semiconductors represent both economic opportunities and national security interests. Entry into the semiconductor value chain means tapping into a global market forecasted to reach US$1.4 trillion by 2029 with a 12 per cent compounded annual growth rate. It also strengthens local skills and expertise, fosters the development of associated high-tech industries and raises the domestic value-added in electronics production.

Semiconductors are also a matter of national security. Dependence on imported chips makes the country’s critical infrastructure vulnerable to supply chain disruptions and hidden malware risks. The sweeping US chip export ban on China raises concerns in Vietnam as to whether its political differences from the West may lead to a similar fate in the future.

Hanoi has adopted a two-pronged strategy to reduce its vulnerability to these external threats. It maintains diplomatic neutrality amid geopolitical conflicts while gradually strengthening domestic capability in all three stages of the semiconductor value chain — chip design, front-end fabrication and back-end assembly and testing.

Generous incentives are not the only reason multinationals are pouring billions of dollars into Vietnam’s semiconductor ecosystem. One advantage of Vietnam over its regional neighbours is its pool of young engineering talent at a relatively lower cost. Over 40 per cent of Vietnamese college and university graduates are majoring in science and engineering, and Vietnam has been among the top 10 countries with the most engineering graduates.

As the risks of putting all one’s eggs in the China basket increase, semiconductor companies find Vietnam a promising option for their China Plus One strategy. The country’s northern manufacturing cluster is only a 12-hour drive away from Shenzhen, China’s manufacturing hub. That ensures minimal supply chain disruptions for those looking to diversify.

Vietnam also boasts one of the most open economies in the world, with 15 free trade agreements, an ever-improving business environment and a relatively stable government with clear socio-economic development plans. The country’s geopolitical neutrality is another plus for tech companies searching for a low-risk location to produce and export.

Vietnam’s semiconductor scene is evolving quickly across all stages of the value chain. Synopsys — a leader in chip design software — is shifting its investment and engineering training from China to Vietnam. The South Korean tech giant, Amkor Technology, signed a deal in 2021 to establish a US$1.6 billion semiconductor manufacturing plant in Bac Ninh province.

Intel recently channelled an additional US$475 million into its assembly and test plant in Vietnam that produces core processors. Local tech corporations have similarly launched their own lines of low-end semiconductors for a wide range of applications. Such projects are laying the foundation for even more investments to come.

The next step for Vietnam is to go beyond attracting foreign direct investment to integrating multinationals into its economy. Weaknesses in the country’s investment climate — including backward infrastructure, weak intellectual property rights enforcement, cumbersome procedures, underdeveloped supplier networks and a shortage of local skills — must be urgently addressed.

Vietnam should leverage foreign investors’ resources and expertise to catalyse improvements in its semiconductor ecosystem. The recent chip design training agreement between Synopsys and Saigon Hi-Tech Park is a welcome step in this direction. Another example is Samsung’s domestic supplier development program — jointly organised with the Ministry of Industry and Trade — enabling many domestic suppliers to become internationally competitive.

What Vietnam should not do is try picking winners to gain sovereign capability in semiconductors. Protecting local — especially state-owned — enterprises from foreign competition while subsidising their operations only perpetuates the inefficient use of domestic resources. The policy should focus on creating a business environment that enables all potential winners, foreign and local, to thrive.

Phan Le and Hai Thanh Nguyen are economists at the Central Institute for Economic Management (CIEM) of Vietnam.