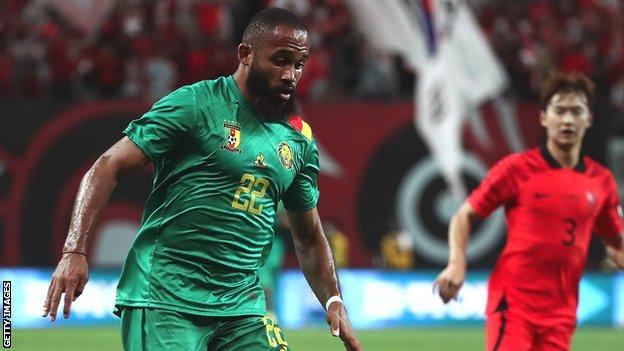 Brentford forward Bryan Mbeumo says he will go “crazy inside” should he have the honour of starting a game for Cameroon at the World Cup.

The 23-year-old was called up for the finals in Qatar, where the Indomitable Lions face Brazil, Serbia and Switzerland, despite only making his debut in September.

Having called it a dream come trueexternal-link to contest football’s greatest event, Mbeumo would relish lining up for the anthems.

“Just to walk around the pitch with a big crowd and other stuff would be amazing. It’s going to be crazy inside me.”

Cameroon will play in the 40,000-capacity Al Janoub Stadium, twice, and the 80,000-capacity Lusail Iconic Stadium, which hosts the final itself on 18 December.

Mbeumo only recently chose to represent the central Africans after playing at various youth levels for France, where he was born, with his switch formalised just three months ago.

His father comes from Douala, where Mbeumo still has “a lot of family”, with other relatives in the capital Yaounde.

Douala is also the home city of four-time African Footballer of the Year Samuel Eto’o, who has led the Cameroonian FA since late 2021 and who played a key role in enlisting Mbeumo.

Prior to the Avalon-born Mbeumo committing his future to the five-time African champions, the pair went out for dinner in Brentford’s home city London.

“It was an honour for me just to be face-to-face with him and talk to him because he was one of the best strikers in the world,” he explained.

“He told me about the project, what we can do and I enjoyed this moment. It’s a big thing for someone like him to want you in his team.”

Eto’o amassed four Champions League and two African titles during his distinguished playing career, and Mbeumo says the former Barcelona star is aiming high after Cameroon lost their Africa Cup of Nations semi-final on home soil against Egypt in February.

Mbeumo describes the decision to discard his mother’s homeland for Cameroon as “hard and long”.

He grew up watching Nations Cup matches and says he knows Cameroon well, unlike some dual nationals who can have scant knowledge of their adopted nations.

“As I played for France in the youth team and grew up in France as well, it was hard but I have travelled to Cameroon many times,” said the softly-spoken Indomitable Lion.

“My dad is very proud, and very happy for me. I’m grateful to be part of this for him, and for my family, and he’s very happy.”

Mbeumo’s Cameroon debut came in a 2-0 defeat by Uzbekistan before a 1-0 loss against South Korea, with both games in Seoul.

“These were my first games in [senior] international football, so I learned a lot. It’s a different type of game.”

It is also a different dressing room for Mbeumo, who was playing second-tier French football as recently as 2019 for Troyes.

Accustomed to a buzzing Bees dressing room, he is enjoying his time with Cameroon’s squad, who often sing and dance en route to matches.

“In our dressing room, we love music as well and like dancing but in there, it’s unbelievable! So fun.”

There is serious music to be faced in Qatar though.

Despite impressing in their first two World Cups – unbeaten in 1982, prior to becoming the first Africans to reach the quarter-finals in 1990 – Cameroon’s recent record is poor.

For Mbeumo to boost their hopes, the gliding forward must speed-learn both international football and the playing styles of his new team-mates.

Cameroon have one final warm-up match, against Panama on 18 November in Abu Dhabi, prior to their Group G opener against Switzerland on 24 November, with clashes against Serbia (28 November) and Brazil (2 December) to follow.

The squad announced by former Liverpool defender Rigobert Song saw Nicolas Nkoulou recalled after a five-year absence and Mbeumo among 11 players with five caps or fewer.

“It’s difficult because you are meeting new players, yet you need to create links between each other,” said Mbeumo, who regularly provides chances at club level.

“It takes time and of course it’s going to be hard. I want good relations with my team-mates.”

He has joined Cameroon’s WhatsApp group to know the rest of the squad better, especially since only one other Indomitable Lion – Swansea City’s Olivier Ntcham – is based in the United Kingdom.

While expecting tough games from Switzerland – “very good job in the Euros” – and Serbia – “very good, very consistent” – Mbeumo does not believe Cameroon need to have gathered all their points before the final Brazil clash.

“I don’t think that’s the aim. We have to aim big, dream big as we don’t just want to be part of this competition – we want to do something.”

His words amplify the targets of Eto’o, whose striking prowess returned 184 goals from 303 games for Barcelona and Inter Milan.

In contrast, Mbeumo’s finishing can be wayward, as emphasised by his hitting the post eight times last season, and he admits to asking Eto’o for tips.

Both will hope these sink in as Africa’s record eight-time World Cup qualifiers try to reach the knock-out stages for only the second time.

A more realistic chance of silverware comes in 2024 when Ivory Coast hosts the next Nations Cup, a tournament Mbeumo also cannot wait to savour.

“Playing the Nations Cup is something very big in Africa, so it’s going to be very nice – I’m excited.”

With two major finals looming in the next 14 months, it’s quite a start for this latest Indomitable Lion as he roams afresh in the African football savannah.