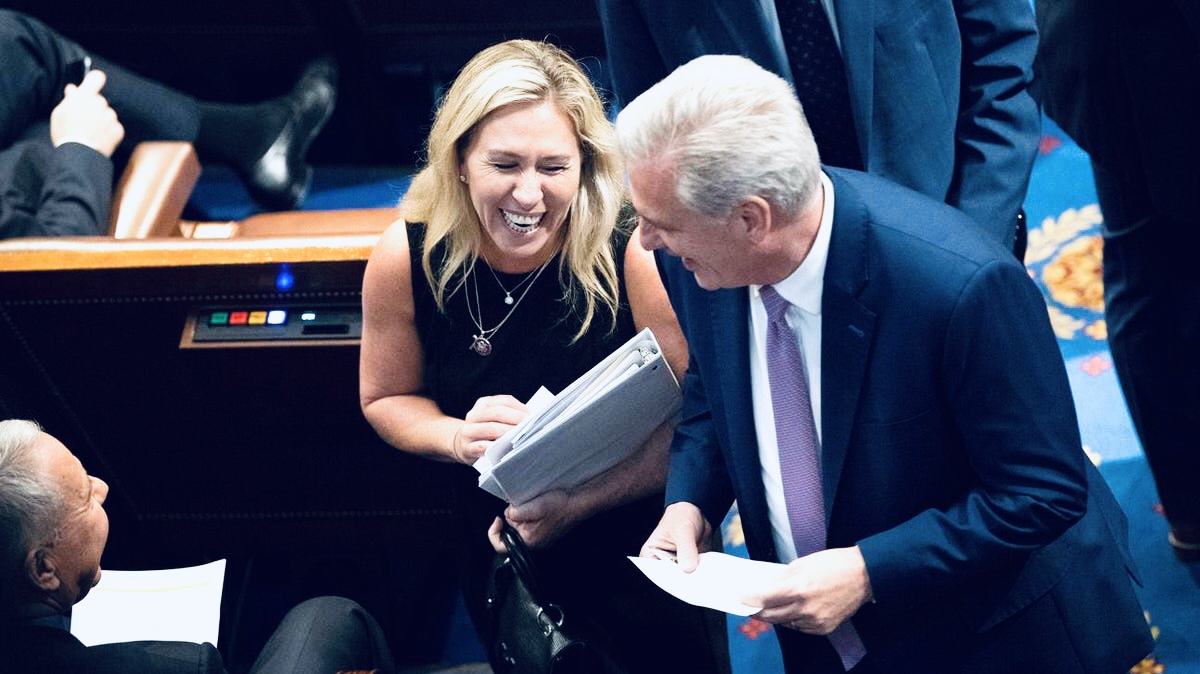 Georgia Rep. Marjorie Taylor Greene has endorsed Kevin McCarthy for Speaker of the House, after spending virtually all of her first term in Washington claiming that she would oppose the GOP establishment leader’s quest for the gavel.

Rep. Marjorie Taylor Greene claimed during an appearance on Steve Bannon’s War Room broadcast that it’s a “bad strategy” for conservative members of the GOP to oppose Kevin McCarthy’s latest attempt at becoming Speaker of the House; a 180-degree turn for the Georgia Congresswoman who made a name for herself claiming to be a champion of the anti-establishment America First movement.

McCarthy has reportedly agreed to restore Greene’s committee assignments should he become Speaker, after they were stripped away from her by Democrats.

“I actually think that’s a bad strategy,” Greene told Steve Bannon when asked for her opinion on the positions of fellow Freedom Caucus members like Andy Biggs, who’s announced that he won’t vote for McCarthy under any circumstances and may run for Speaker himself.

Using NRCC-style talking points, Greene told Bannon and War Room viewers that if conservatives don’t get behind Kevin McCarthy, Liz Cheney will be the next Speaker of the House.

“Let me tell you something Steve, here’s the harsh reality,” Greene said.

“It’s very, very risky right now to produce a leadership challenge, especially for Speaker of the House, when they are going to open the door, and allow Liz Cheney, possibly, to become Speaker,” she said seconds later.

Bizarrely, Greene then compared opponents to McCarthy’s potential speakership to the GOP establishment’s Never Trump movement, a movement with which McCarthy and his closest allies have been intimately affiliated.

“Do we want to watch a challenge for Speaker of the House simply because it’s a “Never Kevin” movement, just like we’ve seen a Never Trump movement?” Greene said.

“I will not do it. There is no way in hell I will stand there and allow that to happen,” Greene said, calling on the GOP to unite behind Kevin McCarthy for Speaker.

In addition to her massive flip-flop on McCarthy’s Speaker candidacy, Greene’s support for the establishment leader reneges on her vow to impeach Joe Biden, a promise she’s made as recently as just a few days ago and has consistently used as a fundraising pitch.

Kevin McCarthy has been adamant that he won’t impeach Biden should he become the next Speaker of the House.

Conservatives “in the know,” have spoken of a “power-sharing” agreement between McCarthy and Pelosi, meant to blunt conservative legislative prowess and preserve Nancy Pelosi’s influence, which she recently insisted she still has in Congress, following the midterms.

Watch MTG endorse Kevin McCarthy for Speaker of the House below:

Greene’s Support of McCarthy for Speaker also comes after National File exclusively published a nuclear bombshell of a House Freedom Caucus memo, detailing plans to make President Trump the next Speaker of the House. Under the U.S. Constitution, the Speaker does not have to be a sitting member of Congress.

The 45th President is expected to make a major announcement on Tuesday, the same day that the GOP is set to convene for their first conference on electing new leadership, including the position of Speaker.