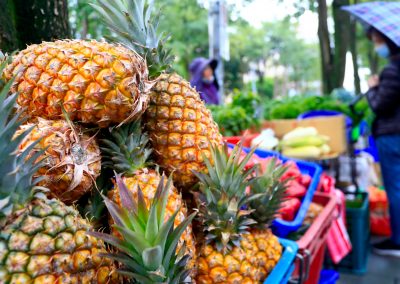 Following China’s ban of Taiwanese pineapple and wax apple imports in 2021, grouper fish and citrus fruits joined Beijing’s expanding list of restricted Taiwanese agricultural products in August 2022. Because agriculture accounts for just 0.6 per cent of Taiwan’s exports to China, the direct macroeconomic impact of these restrictions is limited. Yet the coercive nature of these measures suggest that Taiwan needs to be prepared for the future.

The official reasoning behind the bans are sanitary and phytosanitary concerns, such as excessive pesticide residue and fruit insects. While WTO rules grant China the right to impose measures necessary to protect human, animal and plant life, China’s bans do not seem evidence-based or necessary.

For all the restrictions imposed to date and despite Taiwan’s repeated requests for information, China has not provided any scientific documentation other than border inspection data. Taiwan was even able to divert its pineapple exports to Japan two months after China’s ban, where agricultural imports are subject to equally if not more stringent sanitary requirements. This underscores concern regarding the scientific validity of China’s restrictions.

The bans are also excessive. China’s justification of its pineapple import ban is that scale insects have been detected in exports from Taiwan. Scale insects have also been found in some exports from Taiwan to Japan — but instead of being denied entry, the pineapples underwent methyl bromide fumigation at the border to alleviate the risk. This signifies the excessiveness of China’s total ban without considering less restrictive alternatives.

China’s practices also go against the obligations of the Cross-Strait Cooperation Agreement on Phytosanitary Measures regarding Agriculture Products, which has been in force since 2009. Articles 5 and 6 of the Agreement expressly stipulate that both Taiwan and China need to ‘immediately notify’ the other party of major incidents, followed by an expedited fact verification and consultation process. According to Taiwan’s Council of Agriculture, a total of 14 requests were lodged between March 2021 and March 2022 without any acknowledgment of recipient from China.

Taiwanese government and industry actors alike have concluded that these agricultural import bans amount to economic coercion, reflecting China’s political displeasures. Although the overall economic shock for Taiwan is small, these measures do create significant impacts on individual farmers involved. In the case of pineapple, while only 10 per cent of Taiwan’s pineapple production is bound for export, 90 per cent of the export goes to China. Similarly concentrated export structures can be found for wax apple, citrus fruits and grouper fish, suggesting that these agricultural products have been specifically chosen to maximise the coercive impact.

Increasing domestic consumption and diversifying export markets have been Taiwan’s main tools to alleviate the shock. With assistance from the Council of Agriculture and other government agencies, pineapple exports to Japan and elsewhere is set to reach roughly 80 per cent of exports to China in 2022.

Yet the ability to diversify might not be an option available for other targeted products, with the Council of Agriculture admitting the unlikelihood of finding alternative markets for grouper fish in the short run. More importantly, there is growing concern that these developments indicate that Beijing is moving toward a strategy of weaponising Taiwan’s economic interdependence with China to increase political pressure.

As the Taiwan–China relationship deteriorates, Taiwan needs to prepare new economic security risk assessments. China remains Taiwan’s largest trading partner and investment destination. In 2021, China and Hong Kong accounted for over 40 per cent and 22 per cent of Taiwan’s total export and import respectively and received 30 per cent of Taiwan’s total outward investment. On the contrary, Taiwan accounts for an insignificant share of China’s external trade and investment, constituting only 2.3 per cent of total exports and 9 per cent of imports. Investment to Taiwan falls outside China’s top 20 destinations.

Yet the risk level for Taiwan is still modest for the time being. For Taiwan’s import from China, over 90 per cent are intermediate inputs and alternative supply sources are available in most cases. Around half of Taiwan’s export to China are semiconductors and alternative sources of advanced chips outside Taiwan are extremely limited — South Korea is the only other commercially available source of supply. This limits China’s willingness and ability to target the centrepiece of Taiwan’s exports.

Taiwan’s immense investments in China, which aggregate over USD$300 billion, could also be a major point of vulnerability. Unverified reports of coercion against Taiwanese investments are not new, including through explicit tax evasion or environmental pollution charges or implicit business cutbacks or cancellation of contracts. These cases are difficult to verify and there are little remedies available outside of the local Chinese judicial system.

The asymmetry in cross-Strait economic relations is providing the opportunity for China to increase its leverage in weaponising Taiwan’s interdependency — and it seems that China is now more inclined to do so. A priority for Taiwan should be to undertake assessments on its investments in China to understand the potential economic security concerns and come up with possible actions to address them.