‘For the people’: Here’s why streets across Australia have been awash with Samoan flags 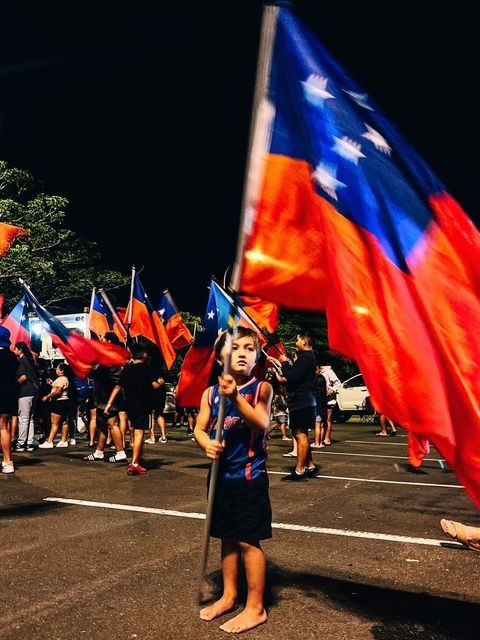 Remember who you are, know where you come from.

Words that have echoed throughout parades and celebrations as streets across Australia from Logan City to “Mounty”, have been awash with flags representing the red, blue and white stars.

“It’s not just a win for Samoa, it’s a win for all Pasifika people,” Taitu’uga Kitch Wesche says.

“‘Tasi le Moana’, meaning we are one ocean. This is a big win for all of us.”

Samoa is the first Pacific country to make the final at the Rugby League World Cup. A historic feat that has seen an outpouring of culture, pride and emotion not limited to Samoan people but Australia’s broader Pasifika community.

As Toa Samoa prepares to face the Kangaroos early on Sunday at one of the most anticipated finals in the tournament’s history, here’s a look at the street parades, celebrations and impromptu festivities still in full force across Australia.

It is seven o’clock on Thursday night and dozens of Samoan families are pouring into a Logan car park, south of Brisbane.

Jerry Lale is among the organisers of the event, and says they’ve been meeting like this every night.

“We’ve been celebrating for weeks. So ever since World Cup started. So we’re probably in our fourth or fifth week. And yeah, we’re on fire. We love it,” he said.

The parents stand by as the kids perform the traditional Samoan war dance – Siva Tau.

Next to English, Samoan is the dominant language spoken in Logan City.

Programs with the aim to teach and empower local youth and families have been held every night this week.

“This is about our kids knowing who they are. Our second and third generations born outside of Samoa,”  Taitu’uga said.

He’s been part of the team running evening workshops as well as parades on Brisbane’s north side.

“My children are mixed Indigenous Australian and Samoan, so acknowledging this country and paying respect to our Indigenous brothers and sisters is part of our celebrations.”

Samoa, a small island nation in the Pacific Ocean, has a population of just over 200,000. And a large diaspora in Australia and around the world.

Samoa shocked the world when it defeated England 27-26 last weekend —winning a history making entry into the final.

It’s the first time a team from outside of Australia, New Zealand, England and Great Britain has qualified for the Rugby League World Cup final since France in 1968.

Samoa may go in as underdogs, but a upset could be on the cards. Its team boasts NRL talent including Penrith Panthers premiership players.

The song 685, by artists Victor J Sefo featuring POETIK & BIGGs, quickly became the unofficial anthem of the global parades. The numbers refer to the country code of Samoa.

The blue army have marched, danced, cried … and closed down roads. Sometimes with council approval, sometimes without.

Many Pasifika NRL players of dual eligibility withdrew from selection for either the Kangaroos or the Kiwis in favour of representing their family heritage and ancestral homeland.

As the media took focus during these times, it often ignored the reality for Pasifika players who love their adopted homeland as much as their Pacific Island heritage.

“Don’t forget the impact we have had on those people around the world who have never met us but have supported us right from the get-go,” Samoan captain Junior Paulo said in his post-game speech in the aftermath of Toa Samoa’s win over England.

“They have never forgotten about us.”

Community leaders have tasked themselves to ensure the significance of the win and subsequent celebrations incorporate a deeper understanding of Samoan culture.

More than a football game

But Toa’s celebrated move into the finals transcends sport.

To understand why there is such an outpouring of alofa (love) is to know about the sacrifices of those who have come before.

“Our parents migrated from Samoa for better work, for opportunities and for our generation to have better lives,” Taitu’uga said.

“A lot of them came here and worked in factories, couldn’t speak English, and had nothing.

“This movement that is happening from NRL, but these celebrations are also a tribute to [our parents].

“Its more than a football game – its about the sacrifices our parents made, their hardships and struggles – when we see one of us doing well, then we all do well.

“And we’re tasked to share that with our children.”

Australia is undefeated at the World Cup. But the Rock won’t be the only one cheering if Samoa manages to pull through on Sunday.

This one is for the culture

On Saturday marches will be held across Australia in the lead-up and final hours of the match.

“… In everywhere we go as Samoans, we try to do the best we can,” Elder Sitagata Hanamenn Hunt said at the Samoan march on Brisbane’s north side.

“The way we do things, is the Samoan way. And what is that? Fa’aaloalo (respect).