From Bunnings raffles to business class: How things have changed for the Jillaroos since their first World Cup 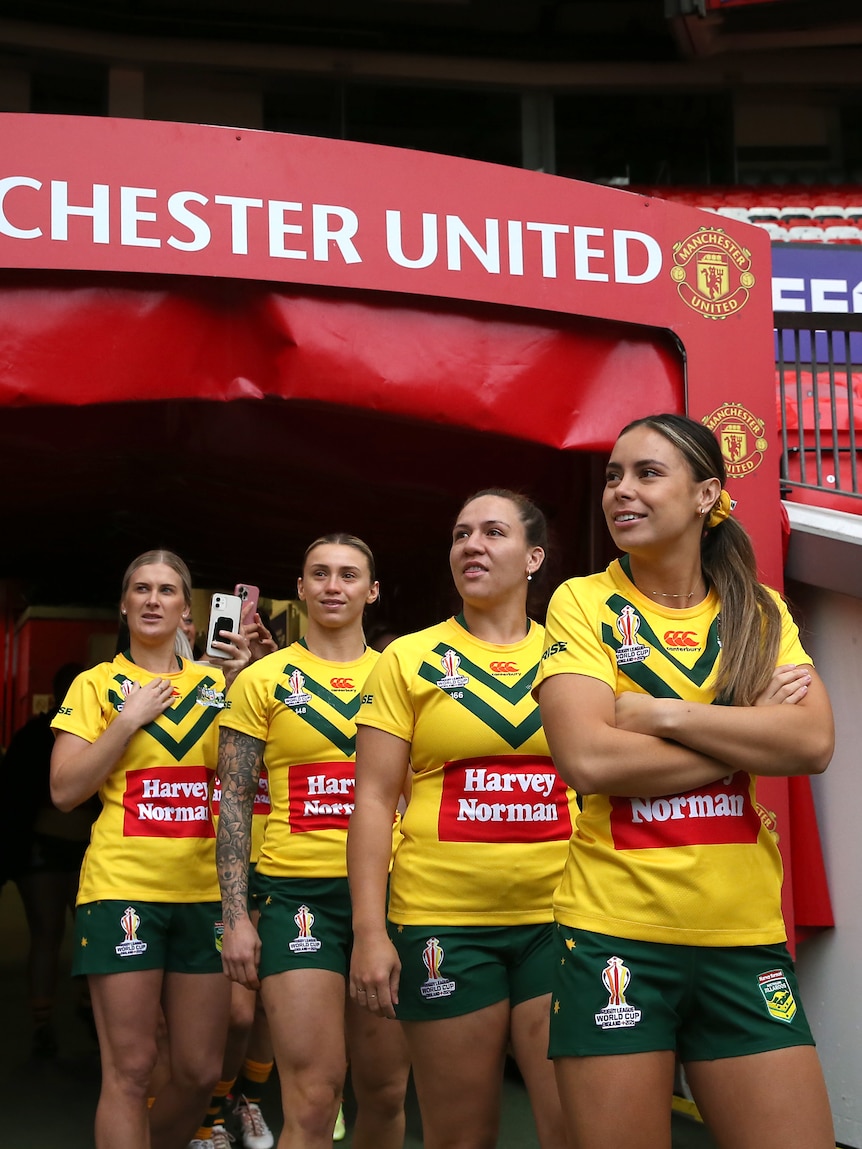 Just before the Jillaroos flew out for the Rugby League World Cup, they were greeted by a gauntlet.

The players’ faces lit up as they saw the two dozen or so applauding women, all of them having poured the concrete for the launching pad from which the current side would jet to England.

And they flew there business class, a rare privilege among the women’s sides that was pointed out by Cook Islands coach Rusty Matua, and an unimaginable thought from the playing days of many of the women waving goodbye to them.

“I won’t lie. I’m very envious,” said former Jillaroo Karyn Murphy, who would have been on that plane as an assistant coach had she not taken up the role as head coach of the Gold Coast Titans NRLW side.

In reality, the previous generations celebrate the success and whatever privileges are afforded to the current side, who are preparing for a fourth straight World Cup final showdown with New Zealand.

“We always get asked if we’re jealous or bitter that we’re not getting paid for it and it’s not like that at all,” the most capped Jillaroo, Tahnee Norris, told ABC Sport.

“If we didn’t go through what we went through, they wouldn’t have what they have now. And I’m really proud that we had to do that.

“I don’t have any qualms about that sort of stuff. I just wish them all the best. I just love watching them play and I love watching how far [the sport has] come.”

While everyone in rugby league owes a debt to Murphy, Norris and all the other Jillaroos who burst through the glass ceiling, it was clear from the way various squad members made beelines for certain women at their farewell that most of the modern stars had connections with specific people.

That was by design.

“Before we came into camp, we were each given a Jillaroo from the list and we had to reach out to them, talk to them and share with the group what their experience was like and what they’re doing now,” forward Kennedy Cherrington said.

“We want to honour who came before us and remember who we are. It’s been a great campaign. I’ve learned so much.”

Selling cars, taking out loans and losing jobs to play in a World Cup

Danielle played at the first Women’s World Cup in 2000, alongside current Maroons coach Norris, who was warmly embraced by many of the current squad at the farewell, which doubled as a reunion with old teammates such as Veronica White and Tracey Thompson.

Back then, the team was full of cops, school teachers and public servants, and Norris said they enjoyed reminiscing, even — or maybe especially — about the hard times.

“Having to pay for your shorts and your socks at a World Cup, or having to stand out the front of Bunnings and sell tickets to try [to] raffle yourself over there,” Norris told ABC Sport.

Cherrington also shared from her history lessons that others had to “sell their cars and [take] out loans”.

Norris said the burden of getting to the first tournament — which was also held in England — forced some players to withdraw because they couldn’t afford the ticket or to take the time off work, while Murphy said others lost their jobs.

Once they got over there — definitely not on a business class Emirates ticket — the team stayed in university dorms and lived as the boarding students did, including a shared lunch hour and rationing hot water for post-training showers.

“A couple of front rowers in the dorm next to me looked after me, their halfback,” Murphy said.

“They always used to say, ‘You go first, you can have our hot water’.”

Norris described the freezing weather as “the worst conditions I’ve ever seen – it was wet every day”, which meant evenings spent drying kit on bar heaters after training.

“It was challenging,” she said.

“We didn’t have a doctor or physio touring with us. It was the same as what the girls have got now with the four-day turnaround [between games], so we were doing everything we could without the sport science or [strength and conditioning] help or physio help to get us back in the game.

“We actually had to get ourselves to be able to turnaround and play in four days’ time and play the best we possibly could.”

So short on support and resources were they that back rower Veronica White had to sing the national anthem before the game, in between warm-up runs.

And while it’s not quite at that level anymore, some similar problems remain.

Sacrificing for NRLW ‘comes at a cost’

While the team is over in England trying to win a third straight World Cup, the veterans and leaders are also keeping a foot in the negotiations for a collective bargaining agreement (CBA) with the NRL.

The men’s draw has been announced, but the 2023 NRLW season schedule is still unknown, due to a hold-up with the CBA.

So the players’ association (RLPA) has released a statement saying they are “frustrated” with the negotiations.

“We have invested in the start up and growth of the [NRLW],” a statement attributed to the female leaders of the RLPA read.

“It has come at a cost to our personal lives, families, employment and studies, but we have committed to making these sacrifices because we are pursuing our dreams and we want to build strong foundations for the future of the game.

“However, the lack of security and certainty does take a toll and we believe it is time that we are afforded the respect we deserve through the first ever women’s CBA.”

The players said they hoped a CBA would “provide all players with a clear pathway to pursuing a professional rugby league career”, which is currently only available to very few at the absolute top of the sport.

Murphy said that, in her new role as Titans coach, she had seen players getting up at 3am to do a shift at work, then training and taking care of NRLW commitments, with many juggling parenting duties as well.

Norris said she thinks, and hopes, the NRLW being a viable full-time career for every player isn’t too far away from being a reality.

“Having a base wage for a young player coming through at the moment, we’re still a few years off that, but your top players — between NRLW contracts, Origin, plus Jillaroos contracts — there’s a big opportunity to be a full-time player now.”

Flipping the script on Kiwi dominance

Back on the field, Norris and Murphy are most interested in seeing the Aussie side get one more over the Kiwi Ferns on Sunday morning (AEDT).

Both made their Australian debuts in the same 1998 game against Fiji and led the side through to the 2013 World Cup.

While Australia is currently the dominant force in women’s rugby league, it certainly wasn’t the case for most of their careers, with New Zealand winning the 2000, 2003 and 2008 World Cups, including thumping the Jillaroos 50-6 in a play-off match at the inaugural tournament.

Murphy and Norris eventually made it to the final in 2008, only to be hammered 34-0 by the Kiwi Ferns, before finally breaking through with 22-12 win over their rivals in 2013 in England, which was the first year that the players didn’t have to pay their own way on tour.

“It was just a sense of relief when we won that first one, to finally get that win at a World Cup and be classed as the number one team,” Norris said.

The Jillaroos haven’t lost a World Cup game since then, including the 2017 final, a rematch against New Zealand.

“It was such a struggle for that many years and to see them now be that number-one country, where they’re having such success. Just where they are now, it’s so good to see.”

And, while the yarns spun by Murphy and Norris may seem like stories from yesteryear, Ali Brigginshaw, Emma Tonegato and Sam Bremner were all part of that 2013 touring squad and will turn out for the Jillaroos in this year’s World Cup final.

Those three stars are a tangible link to a shockingly recent history of amateurism and lack of regard for the women’s game that they are still fighting to overcome.

Follow the Jillaroos’ quest for a third straight World Cup victory in our live blog from 11:30pm AEDT Saturday.