From Negotiations to Sanctions – Busy Time for Crime in Haiti 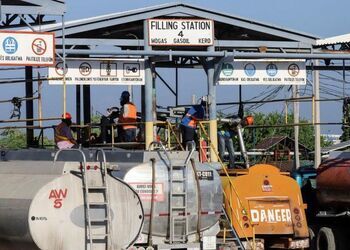 After Haitian authorities reclaimed control of the country’s largest fuel terminal, a flurry of sanctions and arrest warrants against politicians and gang leaders materialized in the past week.

Below, InSight Crime analyzes several recent developments involving some of the country’s most serious criminal actors.

Barbecue eased the blockade after alleged negotiations with Prime Minster Ariel Henry’s administration, mediated by politicians from the government’s Konstwi Lavi party, reported CNN. Haiti’s government has denied negotiating with G9 to reopen the fuel terminal, but a Henry administration official told CNN that the Prime Minster did meet with the alleged mediators.

If true, this would be the second time the government has been forced to come to the bargaining table with Barbecue, who previously blockaded the terminal between October and November 2021. Barbecue finally allowed the terminal to reopen after brokering a deal with the government. Though details of the negotiations remain unclear, the gang had publicly demanded $100,000, InSight Crime previously reported.

In a video widely circulated on social media on November 6, Barbecue permitted trucks to enter the fuel terminal. “Once again, the drivers and employees of the Varreux terminal can come down without fear,” Chérizier said in the video. “We’ve decided among us … to allow for the gas to be released.”

Despite Barbecue possibly securing himself another payday in exchange for reopening the terminal, the Haitian National police praised themselves for securing the site.

Against this backdrop, the United States and Canada delivered blows against two senior Haitian politicians linked to drug trafficking and financing gangs. In separate actions, the countries announced sanctions targeting Joseph Lambert, the sitting president of the Haitian Senate, and Youri Latortue, a former Haitian senator and a longtime politician.

On November 4, the Canadian government sanctioned both men for “enabling the illegal activities of armed criminal gangs, including through money laundering and other acts of corruption,” according to a statement from the Ministry of Global Affairs.

Lambert allegedly used his position to lead a trafficking network that moved cocaine from Colombia to Haiti while guaranteeing his collaborators impunity for drug trafficking charges in Haiti. Latortue is also accused of trafficking cocaine from Colombia to Haiti and ordering others to engage in violence on his behalf. Both politicians have a rich history of corruption accusations. A classified 2010 US diplomatic cable released via Wikileaks referred to Latortue as possibly “the most brazenly corrupt of leading Haitian politicians,” reported Al Jazeera.

Lambert and Latortue are only the tip of the iceberg. Other Haitian officials have been sanctioned in the past, including officials from Haitian President Jovenel Moïse’s administration, accused of coordinating with Barbecue to execute the La Saline massacre in 2018, which left 59 Haitians dead.

Yet one senior politician dismissed the allegations against the two as politically biased. “For Lambert and Latortue, we are talking about acts they allegedly committed 10, 15 years ago. The Haitian people don’t care about that,” a former interior minister, speaking on condition of anonymity for security reasons, told InSight Crime.

The US Department of Justice unsealed the criminal charges of seven leaders of five Haitian gangs, including some involved in kidnapping US citizens, in October 2021, according to a press release from the Justice Department.

In a coordinated action, the State Department announced a million-dollar reward for information leading to the arrest of each of the three men accused of kidnapping. This includes two leaders of 400 Mawozo, Joseph Wilson, alias “Lanmò Sanjou,” and Jermaine Stephenson, alias “Gaspiyay.” Vitel’homme Innocent, a leader of the Kraze Barye gang, is also listed due to his coordination with 400 Mawozo in the kidnapping of 17 missionaries in Port-au-Prince in October 2021.

The sanctions and arrest warrants represent an increased trend of the international community targeting Haiti’s most infamous criminals to help the country control continuous chaos. In October, the United Nations sanctioned Barbecue after he blockaded the Varreux Terminal, which helped to stoke a massive fuel shortage in the country.