‘Home away from home’: Inside the Socceroos’ world-class training facility in Qatar 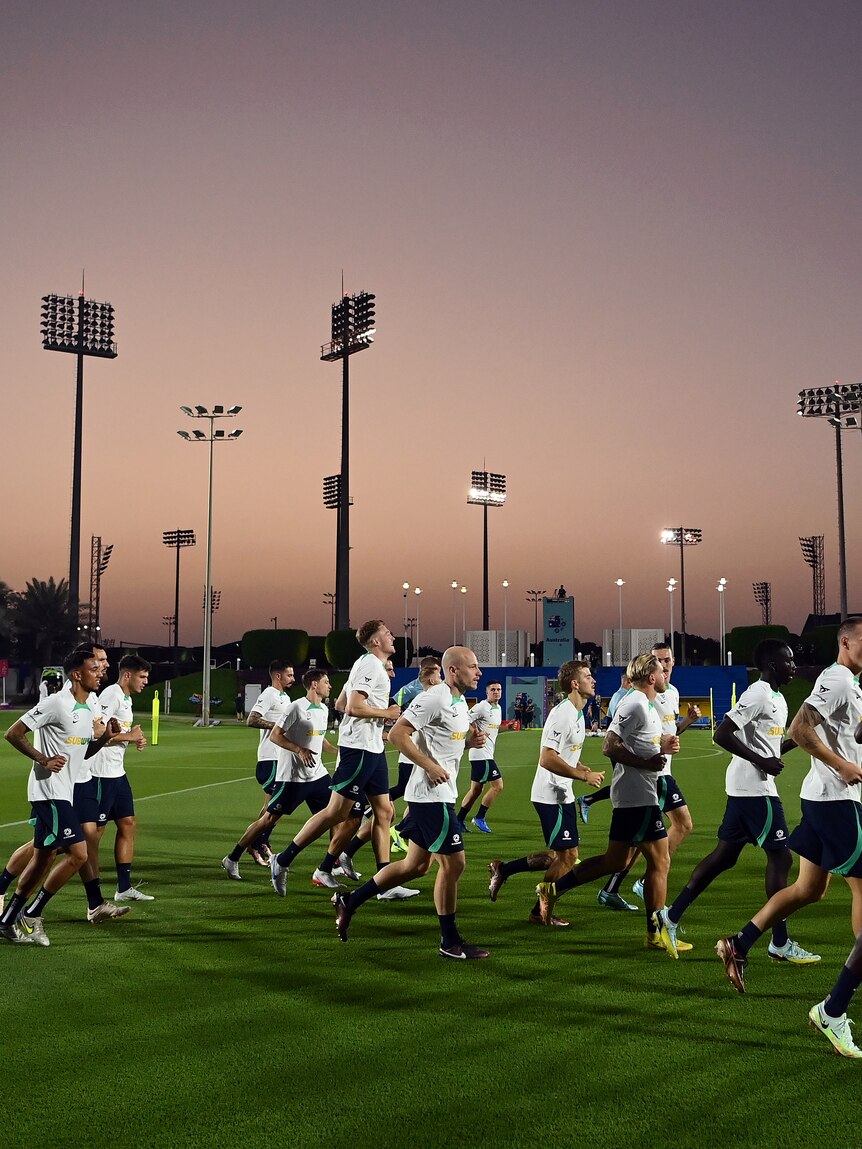 A PlayStation filled with hand-picked games. Letters from fans stuck to a whiteboard. An Australian barista who’s memorised every player’s order. Reading nooks, a pool table, an air-conditioned gym and two training pitches just across the street.

They may seem like small details. But in international football – especially World Cups – it’s the small things that can make all the difference.

Welcome to the Aspire Academy, the training base in which the Socceroos have been preparing for their Group D opponents France, Tunisia, and Denmark.

The academy is part of a larger sporting precinct, Aspire Zone, which sits about 20 minutes west of Doha. Australia’s closest parallel is Sydney Olympic Park, a central pedestrian hub with various facilities that fan out from the area’s main drawcard, the Khalifa International Stadium, which will host several matches throughout the World Cup, including the third-place play-off.

As a measure of its value, the only other national teams using facilities in the area are Ghana and the host nation of Qatar. It is, as Football Australia’s performance director Paddy Steinfort told media during a sneak-peek of the facility, the Socceroos’ “secret weapon.”

It was a weapon they were lucky to acquire. As the second-last of the teams to qualify, pickings were slim when it came to choosing a training base. Most nations had already snapped up some of the best hotels around Doha, with varying degrees of distance from the buzz of the city.

Some, like tournament favourites Brazil, are close to the middle. Others like Belgium and Germany aren’t in Doha at all but staying almost 100km away in smaller, quieter resorts where they can prepare in total privacy.

There are pros and cons to all this, of course. The closer you are to the city, the less you need to travel to the stadiums, which are all located within driving distance of each other.

But as the crowds begin to build, so too does the traffic, meaning teams could be stuck in coaches for longer than they’d like. The nations staying further away may not slow to a crawl as they travel, but they do have to sit around for longer as they go to and from the city for their games.

The Aspire Academy, which is far enough away from the city to feel secluded but without the distances needed to travel between the accommodation and stadiums, seems to have struck the perfect balance.

And it’s only thanks to former captain Tim Cahill, who works as the academy’s chief sports officer and has recently been seconded by the Socceroos as an assistant behind the scenes, that it happened at all.

A few weeks before their arrival, Football Australia sent a team of six, including Cahill, to make it feel like a “home away from home.”

The facility is divided into two main spaces: the common areas and the private rooms.

Walking through the main entrance, the first thing you see is a splash of colour: green-and-gold designs line the hallway with the team’s motto, “Give It 100” in honour of their centenary, on a sign above the door that’s within touching-distance for the players.

Walking through the halls here, you see little reminders of who the Socceroos are and the county they represent. Along one hallway is a whiteboard with hand-written notes from fans wishing the team luck.

Along another is a pop-art illustration inspired by the players’ reactions following their iconic play-off win against Peru. Each of the players’ names is wrapped around pillars throughout the central concourse. This is a space designed by Socceroos, for Socceroos.

Beyond the treatment room is one of the two most popular hangout spots – the social room – equipped with everything from a PS5 with games the players themselves helped pick, to a pool table, air hockey, ping pong, a snack bar, two televisions, and a nook with lounges positioned around a lush palm tree.

The players spend an hour or two a day here, usually before training or after dinner to chill out. Games of FIFA are common, with Mathew Leckie and Aziz Behich two of the more competitive players, while Martin Boyle is apparently king of the pool table.

The second most popular social space is upstairs, and you only need to breathe deeply to know where it is. It’s the coffee shop, staffed by Australian barista Alexia Ralevski, who has been flown in specifically to cater to the Socceroos’ brown bean needs – no matter how simple or complex (Jamie Maclaren loves a ‘magic’: a double ristretto with a three-quarter-full latte).

She makes around 70-80 coffees a day for players and staff, of which Mitch Duke supposedly takes five or six. The players don’t just take, though; they also give back. Some hop behind the coffee bar to help wash dishes and learn to make coffees with Ralevski, with former barista and goalkeeper Andrew Redmayne even bringing his own beans.

Juxtaposed against these vibrant social spaces is the private player and staff rooms, which form the spine of the facility. The rooms curve around a long, cool annex filled with plants and stones. It’s deeply quiet, almost meditative.

In the middle of the annex is a two-storey-tall banner containing the names of every person who has represented the Socceroos from 1922 to today: a reminder of the history and legacy these players carry with them into the tournament.

The players usually bunk together two-to-a-room, but more senior players – like Aaron Mooy and captain Mat Ryan – get the option of rooming solo. Some players, like Leckie, had the option of a single room but chose to bunk with teammates anyway; another sign of the tightness of this group of players and the player-centric approach the Socceroos’ staff have taken to this entire set-up.

The other major benefit of the academy is the proximity of the football-specific facilities to the players’ accommodation. Two full training pitches sit snugly on two sides of the main building while the air-conditioned gym, equipped with curved treadmills, weights benches, stretching areas, standing bikes, and a grassy strip the length of a cricket pitch used for sprint tests.

It’s not just the football facilities that are close; one of Qatar’s best and most advanced sports science hospitals, Aspatar, also sits a couple hundred metres down the street, which has already allowed players carrying injuries and niggles into camp to get much faster and more comprehensive treatment than if they’d been elsewhere.

Overall, the environment at Aspire is such that, even though the players had been offered activities to do elsewhere during their free afternoon when we visited, they chose to stay there anyway. It has become their home away from home, and could be what sees them make it through to the knockouts for just the second time in their history.

“Time is the most valuable resource,” Steinfort said.

“When we’ve only got seven days to build for an opponent like France, when normally we have a full month of camps getting ready, time is a resource that we can’t waste. We’re saving two hours every day just by being here, that’s already a huge advantage.

“The other is the fact that it is a little bit secluded because it is a calming space. We know it might feel at times in the build-up a little too quiet, but once you get out there amongst the noise, it’s going to be a very good refuge to come back to and settling back in and recovering after each of our exposures to the amazing event that is the World Cup.

“I can’t think off the top of my head of another team, even at this tournament, that has access to the breadth and quality of the facilities that we have. We’ve well and truly got a step above everyone there. This is absolutely up there with the best.”