Mexican Cartels Ally With Hezbollah To Distribute In Qatar 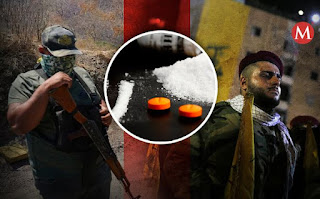 In Qatar, there is no alcohol in the stadiums, but there are drugs on the streets. And those who sell it are the heirs to the criminal structure of Joaquin El Chapo Guzman and representatives of Nemesio Oseguera Cervantes, El Mencho, who have turned the World Cup stadium into one more of their strongholds outside of Mexico.
In an exclusive interview with MILENIO, the expert on narcoterrorism in the Persian Gulf Johan Obdola assured that, for the past five years, the two largest cartels in the country have been distributing cocaine in Qatari territory, according to investigations carried out by the international consultancy -IOSI Global Organization for Security and Intelligence- on drug trafficking in the Arab World.
“In relation to Qatar, since 2017 we detected the presence of drug cartels, specifically the Sinaloa Cartel and the Jalisco New Generation Cartel. “We are following very closely what is going to happen with this World Cup and what is going to happen with the operations of the cartels,” said Johan Obdola from Dubai, where he advises officials in charge of combating drug trafficking and terrorism in the United Arab Emirates, Qatar’s neighboring nation.
According to Johan Obdola, the supply of Mexican cartels in the home of the 2022 World Cup is not limited to cocaine, but also includes methamphetamines and captagon, known as “the drug of the jihadists,” a potent amphetamine that is capable of stimulating the nervous system to the point of preventing sleep for more than 36 hours and is very popular among the ranks of terrorist groups.
But in the months leading up to the inauguration of the World Cup, the use of captagon – also known as “the cocaine of the poor” – had another use in Qatar: it increased among migrants from poor countries in the Middle East who were hard at work building the new stadiums. 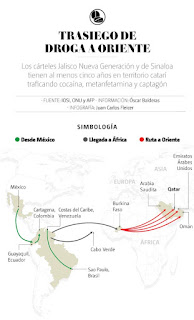 That means that Mexican cartels supplied the drugs needed for the workers wearing FIFA badges to endure long working hours that have been flagged as violating human rights around the world. “Without a doubt, the World Cup is not only an event in which major brands have a lot of interest. Mexican cartels are also attentive and are eyeing big business with the thousands of visitors to Qatar,” commented Johan Obdola, who has served as anti-drug chief in his home country of Venezuela.
Terrorist alliances Investigations by IOSI Global Organization for Security and Intelligence suggest that Mexican cartels have allied with terrorist or paramilitary groups to move their shipments from the Americas to the Persian Gulf. And the main alliance is with Hezbollah, according to these investigations. This Muslim organization is considered a terrorist group in more than 50 countries – including the United States – and has been accused of causing thousands of deaths in the region and of being a major factor in the crisis of violence in Lebanon, Syria and other countries.
It is a win-win pact between the cartels and terrorist or paramilitary groups: the Mexicans provide the narcotics they produce in clandestine laboratories with raw materials from Asia, and Hezbollah allows them to use the drug trafficking routes they control in Europe and Africa in exchange for a percentage of the profits they generate in the Middle East drug market. “The Sinaloa Cartel and the Jalisco New Generation Cartel have already established a strategic alliance from Venezuela to Argentina with Hezbollah (…) This has been known for years.
And so they are opening a series of markets with methods of infiltration and acquisition of properties with which they enter very strongly through Saudi Arabia and are making their way through this part of the world. One of these properties, for example, was reported by MILENIO last September: one of the main money launderers of the Jalisco Cartel, Hassein Eduardo Figueroa Gómez, laundered millions of dirty dollars with the purchase of a luxurious apartment in the Marina Heigths Tower, a residential complex in one of the wealthiest areas of Dubai, just a six-hour drive from Doha, the Qatari capital.
“Qatar is a very small country, but the cartels are diversifying their markets. And security agencies in countries like Qatar are not used to dealing with these types of organizations. In Qatar, for example, they concentrate on combating other drugs coming from Pakistan or Afghanistan, but the modus operandi of the Mexican cartels is very different,” said the co-author of the book “Cocaine Trafficking in the Caribbean and West Africa in the Era of the Mexican Cartels”. “Different how? Violence. Pakistanis or Afghans are not as violent as Mexicans.”
Despite the fact that countries in the Arab World have tough anti-drug policies — which go as far as the death penalty for repeat traffickers — Mexican cartels have managed to breach their borders using two well-known tools: corruption and violence. First, the Sinaloa Cartel and the Jalisco New Generation Cartel use their cells in Latin America to get their shipments to the main ports of the Southern Cone.
Their preferred locations are Guayaquil in Ecuador, Cartagena in Colombia, the Port of Los Santos in Sao Paulo, Brazil, and the Venezuelan coast. The containers then leave by sea for Africa on a route that the United Nations Office on Drugs and Crime has well studied: drugs leaving Latin America land in West Africa, especially in coastal countries such as Burkina Faso and Capo Verde, where authorities have warned that Mexican cartels have been present for at least a decade.
These African nations share similarities with Mexico that make them vulnerable to organized crime: weak institutions, easily corruptible authorities, and a stable political system. 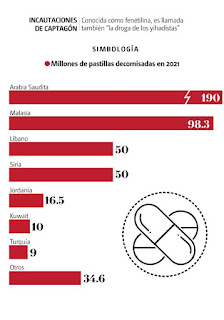 And from West Africa, two routes open up: one that takes cocaine, captagon and methamphetamines to the rest of the Black Continent and another that takes it north to the Middle East, where representatives of Mexican cartels based in Saudi Arabia, the United Arab Emirates, Oman, Bahrain and Qatar are already waiting for it. “As anywhere in the world, here – in the Persian Gulf – there are levels of corruption.
For example, 30 years ago in Dubai there were few streets, there was no development and in a few decades it has become a boutique city. Big buildings, big developments. And this accelerated growth has attracted criminal groups that do a lot of money laundering operations here. “There is a perception in the rest of the world that there is no corruption here.
The emirates have been improving their fight against organized crime, but the presence of Mexican cartels is already here,” said the specialist. The mileage accumulated in those containers with drugs and the risk of very severe penalties for traffickers means that the drugs owned by Mexican cartels produce profits of up to 1,000 percent more than in Latin America.
A round business for organized crime as a soccer ball.
Cocaine moves the world.
Qatar is an appetizing market for drug users for organized crime: in the Middle East there is a growing demand for narcotics that has skyrocketed since the pandemic, according to the World Drug Report 2022. And the World Cup venue stands out in the most recent UN report as a recent major arrival point for large shipments of cocaine, a drug used by at least 150,000 people in the region during 2020. 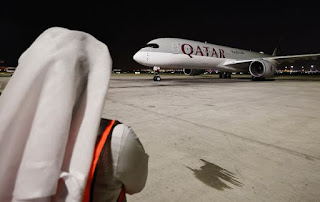 Qatar is an appetizing drug user market for organized crime. (Reuters) Until recently, says Johan Obdola, Qatari authorities did not report seizures of illegal narcotics. Stories such as containers of cocaine from Latin America were swept under the carpet in a country where the emirate has tight control over what is published in the media. “It can no longer be hidden that drug trafficking in Qatar is important.
And it is not true that these countries in the Middle East are only transit countries. For Mexican cartels, local consumption is important and they are encouraging it, as is money laundering in these developing cities. However, reality has set in by leaps and bounds. In the World Drug Report 2022, Qatar appears for the first time as a place where authorities have intercepted cocaine.
A yellow dot on the map indicates that the region of the world that boasted of being untouchable by drug cartels is now just another “plaza” of the Sinaloa Cartel and the Jalisco New Generation Cartel. “The truth… the Mexican cartels have the world’s experts surprised. Their levels of violence, the urban clashes, their international reach… To see them in Qatar is impressive”.