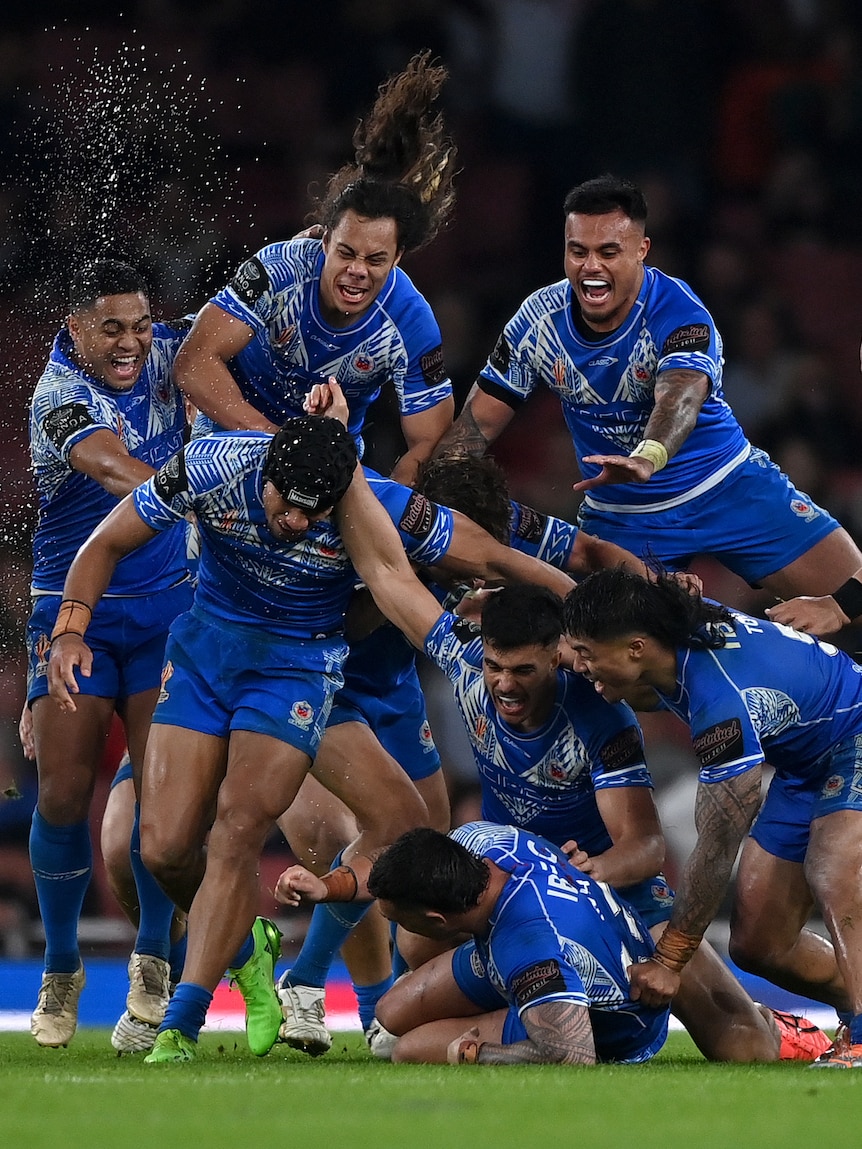 Just call it the Battle of Highbury. The Clock End Classic. The Stephen Crichton Game. Or whatever else you want.

Samoa triumphed in one of the greatest games in World Cup history and is through to its first final after downing a brave England side 27-26 in London after Stephen Crichton kicked a golden point field goal.

It is the first time they’ve qualified for a World Cup final in either rugby code. They are just the fifth team to do so and the first new country to make it since 1988. Given they didn’t win a game in the 2017 tournament, it’s one of the great achievements in the history of Test football.

That’s what happened, yes, and that’s what this means in a historical sense. But they’re just words on a screen, aren’t they? The truth is so much bigger.

This match didn’t ebb and flow, it swung back and forth so violently it could break your neck. Any red-blooded rugby league person would love to be buried in a coffin made of the last 10 minutes.

The moments were indelible, unforgettable as both sides traded blows that would bring down the walls of a city. For every Samoa flash of brilliance, like Crichton’s try off a miracle Junior Paulo offload and a smart Jarome Luai tap-on, England would have a reply like Herbie Farnworth bashing through six Samoan defenders close to the line.

Victor Radley’s heartbreaking intercept to Crichton, who always seems to find something special in big matches when the game is on the line was followed by George Williams, magnificent in defeat, conjuring a long-range score to Farnworth from deep in England’s end.

Only one Test match in 127 years of rugby league had gone to golden point. Tommy Makinson’s clutch conversion ensured there would be two.

And in the end it was Crichton who found the winner, knocking over the first field goal of his senior career, and 40,000 fans collapsed in a mass of laughing and crying, of sweat and tears. They don’t make them all like this. If they did, we’d never survive.

In the end, it was one bad decision in the final seconds and two errors in golden point that undid England. If Elliott Whitehead, who was superb all through the match, had held the ball after making a break in the final seconds instead of going for an impossible pass to Jack Welsby, England might have had time for a last-second winner and golden point wouldn’t have been needed at all.

Once extra time began, the two hammer blows were landed. England survived the first, when Jack Welsby turned an inside pass to nobody and fumbled the pick-up. But the second, when Sam Tomkins threw a slight forward pass from dummy half, was fatal as Crichton found the mark moments later.

There is no shame in losing a game like this. But England had so much riding on this World Cup, the game in this country needed a boost so very, very badly, and playing in a first home final since 1995 would have given the side every chance of knocking over Australia in a series or tournament for the first time in almost half a century.

London is not rugby league country, but the people came down from the north. They will take those long train rides home knowing, and the English understand this very well by this point, that there can be no true despair without hope. England coach Shaun Wade’s near-tears after the match said it all. Their long wait for glory will continue.

Instead, it is the Samoans — battered, bruised and bloody but unbroken — who will head to the Theatre of Dreams with hope in their hearts and history on their minds.

It cannot be overstated how remarkable it will be for them face Australia at Old Trafford.

Not because they managed to knock off Tonga and England in back-to-back weeks – after their stars turned their back on the green and golds, Samoa always had the talent to do it.

The style of the two wins wasn’t a surprise either, because when you have players who can run like Joseph Suaali’i and Brian To’o and offload like Junior Paulo and scheme like Jarome Luai, the game plan kind of writes itself.

What’s scarcely believable is how Samoa rose from the ashes. Its World Cup was in absolute tatters after the last meeting against England when, and this can’t be stressed enough, it conceded 60 points.

Sixty. Six zero. Half a century, plus 10. For a team as proud as Samoa and one filled with such talent, it was an embarrassment. Rising up from the wreckage and rebuilding credibility would have been a fair enough goal for the rest of the tournament, let alone making the final.

And even from there, the hits kept on coming as the adversity piled up. Izack Tago, Braden Hamlin-Uele and Hamiso Tabuai-Fidow were all injured early on and ruled out for the rest of the tournament. So was Spencer Leniu, but he played in the semi-final anyway because they had nobody else. Danny Levi, their first-choice hooker, flew home this week for personal reasons.

Their back-up, Fa’amanu Brown, was knocked out cold inside the first 15 minutes forcing Chanel Harris-Tavita, a half by trade, into the fray under heavy pressure.

Ligi Sao, who scored a try in this win, wasn’t even in the squad when the tournament began. Neither was Tim Lafai, who scored twice.

But in the end, none of it mattered. They found something special, something true, something within each other that cannot be bought and will live forever.

What their stars were trying to build when they all came home to represent their heritage, now it stands as a bright and shining monument to what’s possible in rugby league.

Winning this game wasn’t quite a miracle but beating Australia would be.

Paulo was put on report for a nasty lifting tackle in the first half and will do well to escape suspension. Samoa might not be able to win with him but they cannot win without him.

Harris-Tavita is brave and willing, but asking him to play 80 minutes is a tall order and he may have to do it with Brown set to miss the final due to HIA protocols.

But who would write them off, after all they have done? None of this was supposed to be possible after what happened to begin the tournament. Look at them now. Look at what they can do.

They have already gone boldly where no Samoan side – or any Pacific Island team, for that matter – has gone before. Who’s to say they can’t go one step further?