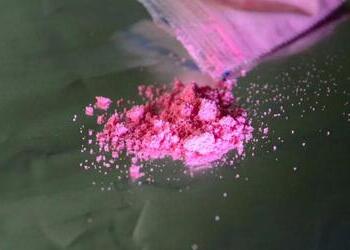 Seizures of pink cocaine, or “tusi,” in Spain show how this synthetic drug has moved from primarily being used in Latin American cities to gaining a permanent foothold in Europe.

During a raid on properties in the Madrid area, Spanish police seized almost eight kilograms of tusi, alongside cocaine, luxury vehicles, a firearm, and hundreds of rounds of ammunition, according to a November 30 press release. This was the third-largest seizure of tusi ever made in Spain and was reportedly set to be sold in tourist areas of Madrid and Málaga.

It comes after an even more significant seizure of 13 kilograms of tusi on the Mediterranean island of Ibiza last August. Twelve people were detained on the island, while another two people were arrested in Colombia. And in May, another Colombian was arrested for producing tusi in the Spanish capital.

Spain first saw tusi emerge in 2016, when nine people, including several Colombians, were detained operating two refining laboratories in the greater Madrid region. This version of tusi appeared to be made with ketamine, cocaine, and methamphetamine.

The name “tusi” is derived from “tusibi” or “2C-B,” a drug first synthesized by a US chemist in the 1970s as part of a broader group of hallucinogenic phenethylamines called the 2C family. A major risk of tusi is that it does not refer to a single substance or a specific drug cocktail, as InSight Crime explained in a July 2022 investigation. Instead, it is a brand name that can be used to sell different combinations of drugs, as long as they are pink and in powdered form.

The increasing popularity of tusi and the various ways in which it is produced could see it rapidly spread in Europe as it has in Latin America.

For the moment, most seizures have been in Spain’s urban tourist centers, matching tusi’s popularity among a wealthier and younger clientele. But it is already being found in other countries.

Last July, Colombian and Dominican citizens were arrested at Milan’s Malpensa airport in Italy with a quantity of tusi on them.

The presence of South American traffickers and chemists bringing tusi into Europe is not surprising. It has seen strong demand in Colombian cities such as Medellín but has also been found in Chile, Argentina, Uruguay, and beyond.

This also fits a pattern of traffickers from Mexico and Colombia helping to set up synthetic drug production facilities in Europe.