Stew Peters to OANN: “This Time, the Genocide Will be Televised” 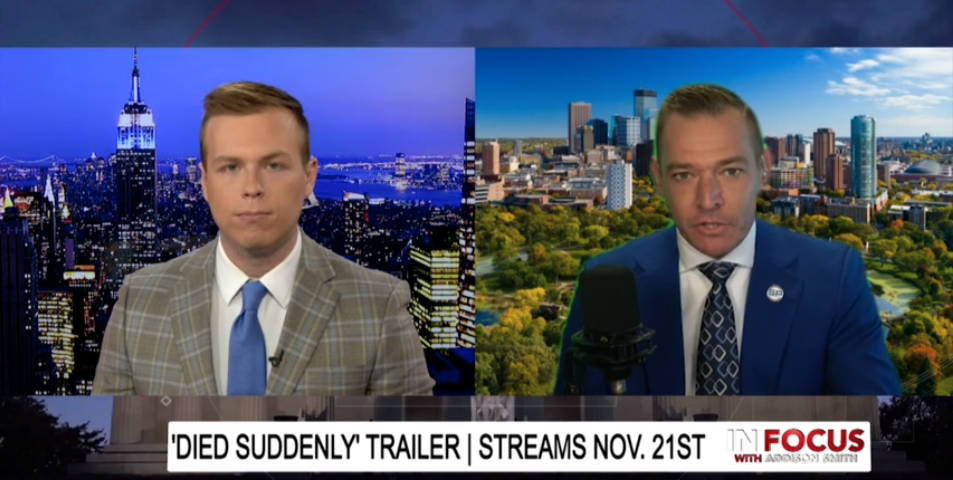 Stew Peters appeared on One America News Network to discuss the premiere of his upcoming documentary, ‘Died Suddenly’, which dives into the COVID-19 vaccine.

Stew Peters, a rightwing political commentator was interviewed by OANN’s Addison Smith. Smith, the OANN host, played the trailer for ‘Died Suddenly’ before discussing the documentary’s premiere with Peters.

“This is something that is not being talked about near enough which is the adverse effects and the countless story of people who have had blood clots or who have died from these vaccines. The regime, I’ll admit, has done a really good job keeping that on the down low,” Smith began.

“Yea, for now. First of all, Addison, you are absolutely right on your intro monologue to this and I want to thank you and OANN for actually bringing attention to this story. This is the number one threat facing humanity and for two years the press and Big Tech, and our bureaucrats, and our politicians have all been suppressing this. But their lies are crumbling because they can’t hide what’s happening,” Peters responded.

“You can’t hide a 15 or 20 percent increase in people dying month after month. It’s no coincidence that embalmers like Richard Hirschman, who’s very brave, coming forward like this. Dr. Ryan Cole, and embalmers around the world are pulling out these fibrous clots from dead vaccinated bodies. Some embalmers are finding them in 70 percent of their vaccinated bodies. Insurance companies in the UK are reporting huge surges in overall deaths,” Peters continued.

“This is what happens when you inject a population with a bioweapon…The expose example just revealed United States government data. By our own government’s admission – now this is about our children, COVID-vaccinated children are 4423% more likely to die than unvaccinated children. But our press won’t tell anyone about this. So what you have is this endless stream of propaganda, story after story after story that has parents leading their kids to the front of the line to get this injection that literally makes them 4423% more likely to die than people who haven’t had this shot,” Peters added.

“So we have to ask the question, ‘well, what’s in these things?’. So you start to ask those questions Addison. And then you find the contract behind Pfizer and our government, the United States government, that prohibits any researchers from obtaining these vials to examine them – why is that?” Peters questioned.

“There’s a lot of questions such as that worth asking but you’re not allowed to ask. The regime insists…you have to trust us. And I’m glad you mentioned this shocking increase [in] the likelihood of dying from the vaccine versus from COVID in the first place. We also have this…this graph, according to the CDC’s own tracking data, which is recorded by doctors and hospitals, more people have been killed by the COVID vaccines in the last 20 months than all the other vaccines in the world over the last 30 years combined,” the OANN host responded.

“Yet, if you say anything about it, you get your Twitter account permanently suspended. We’ve appealed our suspension, the pre-Elon Musk era of Twitter suspended me. I’ve apealed it. I’m still not welcome back. Meanwhile, we’ve talked about antibody-dependent enhancement really early on…cancer rates are surging, miscarriage rates are surging…this is a depopulation event, it’s always been about transhumanism and depopulation” Peters jumped in, referencing Twitter’s censorship of vaccine skepticism.

“And when you start to look at these vials of evidence that are presenting themselves around the world people who are getting their hands on these vials. Microscopy experts, scientists, doctors, researchers are now coming forward and showing us these horrific findings inside of these vials: droplets that contain what appear to be self-assembling circuitry – but yet, you’re not allowed to ask that question and the global governments were all in on it, and the media fortified it, and they should be held accountable.”

Peters went on to discuss a variety of COVID-related databases which are hidden from American public.

“Doctors are being threatened with their licenses if they speak up against these things. Peter McCullough has over 60 peer reviewed published papers regarding COVID-19, one of the most highly respected physicians in the country. He’s a frontliner voice on all of this. He’s now having his medical license threatened as a result of him saying ‘hey, these shots are dangerous.’” Peters noted.

“And Doctor Robert Malone…the father of mRNA vaccine technology, and even he is dismissed of some sort of supposed ‘quack’ for questioning these vaccines and… just making observations.” Smith added.

Peters concluded his OANN appearance with this message: “Every single human being, every human being on this planet knows somebody that has been injected and died suddenly. Over 5 billion people have been injected with this thing and if those 5 billion people watch ‘Died Suddenly’ and they learn what has been done to them, the monsters that have perpetuated this evil will have nowhere to hide.”

The ‘Died Suddenly’ documentary will premiere today, November 21st, at 5:00 PM. Click here to watch the premier or get notified when it is released.