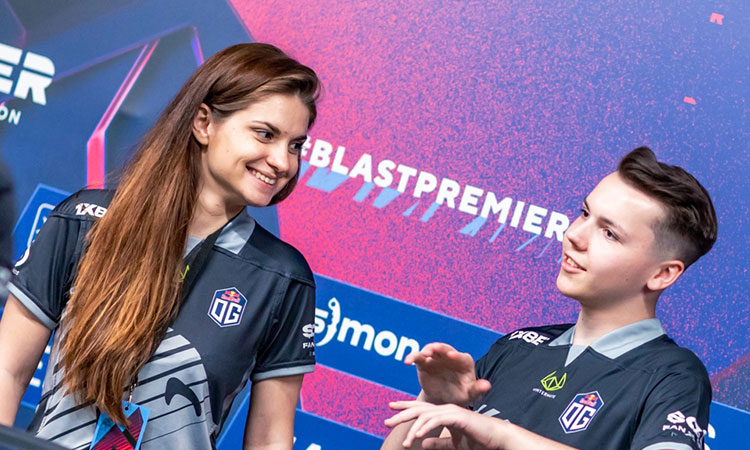 58 per cent online gamers are women in the UAE, said. Vladyslava Zakhliebina.

A former professional Counter-Strike player and esports personality has described the positive impact the industry has had on her and hopes more women in the Middle East can take an interest in it and pursue a career in the future.

Having been involved in esports for over 12 years, Vladyslava Zakhliebina is now the team manager for OG Esports – one of the global teams that will be aiming to book their place in next month’s Blast Premier World Final in Abu Dhabi between Dec.17-18.

Her interest in gaming began from childhood with her strong passion leading her to make a career out of it later. She said: “I first started playing Counter-Strike at school just for fun, but it grew into something more serious during my second year of university when I ended my career as a professional athlete. I started trying to get a deeper understanding of the game and training process to become a professional player.

“It also came at a time when esports was not as big. People would ask me what esports is and whether I can be a professional gamer. The answer I would give is that being a professional is a lot different to just gaming as you need to know much more about the game specifics, team dynamic and analysis behind it. This is like playing football with your friends in the yard or at a professional level like Cristiano Ronaldo or Lionel Messi. Everyone has a chance to try, but not everyone has the strength and passion to succeed and become a legend.”

She added: “During the early days of my esports career, I would get messages from people that I’m not good enough just because I was a girl or some would say that games are just for guys and girls cannot understand games. It’s always sad to see such messages, but they have never stopped me or affected my passion for esports. I was eager to show not only what I can do, but also this industry belongs to females and they can be successful too. I believe esports provides a place for everyone.”

Despite her success, she credits her family for giving her this opportunity to pursue her passion.

“I’m very grateful to my parents for always supporting me with all of my decisions,” she said.

“I remember I couldn’t stop practising and honing my skills in Counter-Strike and spent many late nights working towards my goals. Our apartment wasn’t big and I would sometimes disturb my parents while sleeping, but they never asked me to stop practising.”

With the number of female gamers growing rapidly around the world including in the UAE where women gamers account for 58 per cent of online adults, Vladyslava is pleased to see the female gaming sector increase in popularity.

“I see a lot of steps are being taken and hope there are more females that are taking an interest in esports. The Blast Premier World Final is a great tournament that can attract new audiences including females and see how incredible gaming can be. Esports will continue to grow especially with technology advancing and maybe soon we will see some mixed teams of males and females performing at a high level, which will give a new round of development for the industry.”