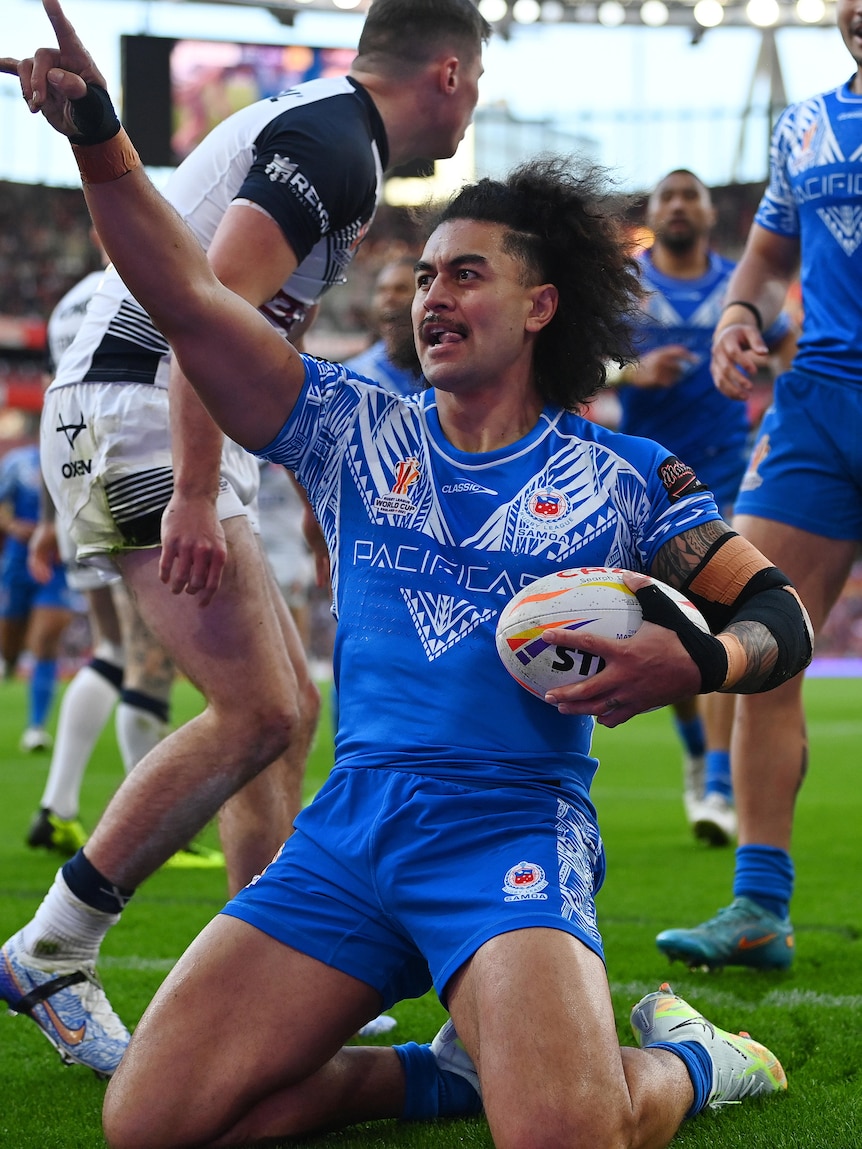 For the first five years of his life, Tim Lafai lived in Samoa and, as the nation prepares for it’s first World Cup final, the veteran centre is remembering those times.

It was a humble beginning, but a proud one all the same.

“I remember our house not having any walls. I remember my dad walking a lot of kilometres to fish for our food because we lived up in the mountains,” Lafai said.

“There was a massive flood that happened that was really scary and I remember mum holding us kids — there were four of us at the time — when the water was coming up.

“Little moments like that make me honoured and proud to put this jersey on for my family back in Samoa and for my mum and dad, because the sacrifice they made — to move us to New Zealand and then Australia for a better life — it paid off.

“I want to honour and repay them by putting this jersey on.”

And that’s exactly what Lafai has done, time and again, through nine years of ups and downs and everything in-between until now, when the 31-year-old will wear those colours again and represent Samoa on the biggest stage of all: against Australia, at Old Trafford, with a World Cup on the line.

Lafai’s tournament has been remarkable. He was only called into the Samoan squad midway through the group stages after a spate of injuries but, after scoring six tries in four matches, including a double in the semi-final win over England, he’s been named to the team of the tournament.

It’s a fitting reward for a man who has given everything to the blue jersey. Lafai is the most-capped player in Samoan rugby league history, with 17 appearances.

“You always have two villages. When someone asks about your village you tell them your mum’s village and you dad’s. Sataua is up in the bushlands, in the mountains,” Lafai said.

“It’s a humbling experience when you go from there to New Zealand and Australia where they have normal houses.”

“As a kid, you always remember those moments and you have those moments reminding why you do what you do, why I try to give my kids the life I can because of how my parents sacrificed for me.

“We had a Test against Fiji in 2016 in Apia and I was able to take my eldest daughter and my wife and show them where I was from.

“I showed my daughter where dad was from and I’d love to take the other kids there as well, for them to have the humbling experience I went through.”

Some of the Samoans have had a longer journey home, like Brian To’o. He wasn’t born in the old country. He’s been there though, and he’ll never forget the first time.

He was about six or seven and he was in Solosolo, his father’s village.

“After the first day, I was really humbled because it blew my mind how happy all the kids were in the village,” To’o said.

“Seeing how they were living, they didn’t have much but they made sure they were grateful for what they have and I think that’s something I took into my life.

“I’m really humbled to be Samoan.”

Memories like that are why players like To’o, Jarome Luai, Junior Paulo, Josh Papalii and Joseph Suaali’i all decided to turn down Australian jerseys for Samoan ones.

Wearing the green and gold would have been an honour, no doubt about it. But there’s something special about playing for Samoa, about going back home, even if you’re not on the islands.

This week the children of Solosolo are marching through the village chanting To’o’s name.

There’s more videos like this from across the world. Spending 10 minutes watching them all is the best time you’ll have today.

It’s happening in Salt Lake City and Penrith, in Logan and Otara. Far the Samoan people have travelled and much they have seen, but they have carried a piece of their past everywhere they’ve gone as they searched for their future.

And if that future has a World Cup victory in it, if this nation that has a recorded population of just over 200,000 that doesn’t count the departed generations who still call it home, it will be a moment unlike anything else that’s ever happened in rugby league.

Because this won’t just be a great moment in the story of Samoan football, it will be one of the greatest triumphs in the history of the nation.

The party might never stop. A Samoan flag will be worth it’s weight in gold. Children will be born and raised and grow old knowing only the sounds of car horns blaring and Samoan fans singing.

And they can win it. Don’t worry about that. It won’t be easy, because Australia are still Australia and still have all the skill and power and ruthlessness that comes with the green and gold jersey.

They’re still here. They’re still standing, their chins are up and their hearts are full and, to the brave and the faithful, nothing is impossible.

“It’s been a journey for the whole squad to be where we are now. The boys are ready. You can see that,” Lafai said.

“The level of maturity shown by the young boys, especially the young Penrith boys, that stands out.

“They’re only in their early 20s and the maturity they show, the footy knowledge and IQ they have for the game is crazy. You can see why they’re the best players in the NRL.

“Young players like Joseph Suaalii, they just have their heads screwed on and you can see them bring that on to the field.

“They bring that swagger, that confidence that this team has lacked over the years. It’s great to see, especially for an old bloke like me who can just stand back and watch them.”

What time is the rugby league World Cup final?

Join Jon Healy from ABC Sport at abc.net.au/sport for all the action as we live blog both matches. The games will be broadcast on Kayo and Fox League.