Has The U.S. Made The Decision To Escalate Its Confrontation Against Iran? 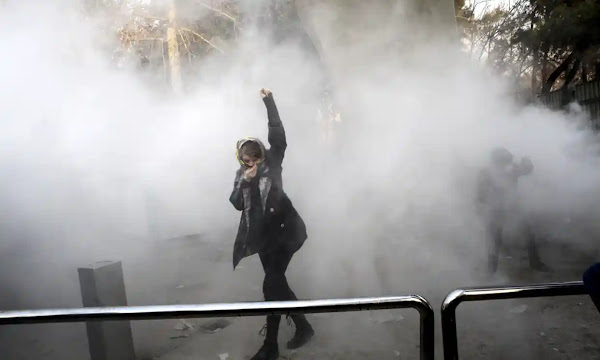 A university student protects herself from teargas while protesting at the University of Tehran. Photograph: AP

Over the past few days, Iran has told international inspectors that it plans to begin making near bomb-grade nuclear fuel deep inside a mountain that is hard to bomb, and dramatically expand its nuclear fuel production at a plant that Israel and the United States have repeatedly sabotaged.

Iranian forces have shot or locked up antigovernment protesters, provided Russia with drones for its war in Ukraine and, some Western intelligence agencies suspect, may be negotiating to produce missiles as well for Russia’s depleted arsenal.

The United States accused Iran on Tuesday of once again violating Iraqi territory to conduct attacks in the Kurdistan region.

WNU Editor: The U.S. is now considering conducting war exercises with Israel to make a point …. US, Israel mull military drills to simulate attack on Iran (Arab News). On the other side the Iranian President is blaming the U.S. for Fermenting unrest in the country …. Iran president accuses US of ‘destabilization’ amid protests (AP). As to what is my take. Nothing has really changed. Both countries have been openly suspicious and hostile against each other since the revolution.