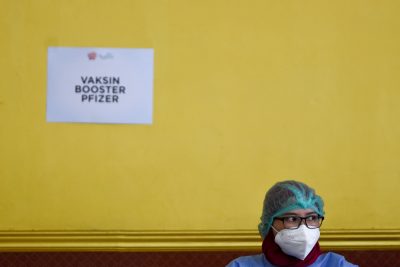 That is a great success for a country that has imported all 400 million doses of its COVID-19 vaccines. It also seems to vindicate the 130-year-old state-owned vaccine producer, Bio Farma, which was likened to a ‘vaccine tailor’ for its bulk import and repackaging deal with China’s Sinovac. Bio Farma is now mulling plans to export and donate this ‘home-grown’ vaccine to African countries. The company’s status as the largest polio vaccine exporter in the world makes this ambition feasible.

Yet the credit for IndoVac should not be given to domestic efforts alone. This significant domestic achievement was made possible through global research and development (R&D) collaboration which was sensitive to the local context. The vaccine’s development also highlights the weaknesses of a publicly driven innovation process and the benefits of tapping private resources.

The seed vaccine — Corbevax — was developed by the Texas Children’s Hospital Center for Vaccine Development and the Baylor College of Medicine. It was trialled by the India-based biotechnology and biopharmaceutical company, Biological E, as a two-dose vaccine administered 28 days apart.

It was developed specifically with low-income countries in mind. That is why it is patent-free, uses mature technology and costs a fraction of what it takes to develop mRNA vaccines. As of 31 August 2022, India has administered 70 million doses with largely positive results.

The R&D was funded almost entirely by private philanthropists, unlike the more advanced technology vaccines that received massive public funding. Using old technology means that, while it is slower to modify than the newer mRNA vaccines, many developing countries can produce it with existing capacity.

Its low R&D costs and patent-free licensing help lower production costs. Neither does it require special storage arrangements, such as the ultra-cold chain needed for mRNA vaccines. So far, the technology is licensed to India, Indonesia and Bangladesh.

IndoVac does not use animal products — so its halal status is another big plus for a country with a large Muslim population. The low-cost, privately funded, not-for-profit knowledge-sharing model attracted interest among vaccine equity advocates and its creators netted a Nobel Prize nomination.

The vaccine’s sensitivity to the local context in which it will be deployed is one of its greatest assets — something that multilateral efforts have largely overlooked. The World Health Organization (WHO) created an mRNA vaccine technology transfer hub in South Africa to address the ‘innovation inequality’ between developing and developed countries that causes vaccination inequity. The hub trains 15 vaccine manufacturers from low- and middle-income countries.

But, while this initiative to transfer cutting-edge knowledge is welcome, the approach is less effective in fulfilling developing countries’ pressing need for COVID-19 vaccines. Bio Farma is the sole full-range vaccine manufacturer in Indonesia, making it the country’s only feasible recipient of the WHO’s hi-tech mRNA technology transfer hub. And yet, its mass-produced COVID-19 vaccine will be based on a low-tech protein subunit vaccine that uses familiar techniques and existing equipment.

Learning mRNA technology is immensely valuable for Bio Farma. But mastering it will take time. Bio Farma’s CEO noted that the mRNA technology will probably be used for other vaccines, not COVID-19. The WHO hub is useful for building developing countries’ innovation capacity in the long run, but less so for immediate needs.

The vaccine distribution capabilities of developing countries also lessen the effectiveness of the WHO’s technology transfer scheme. When Indonesia received mRNA vaccine donations in 2021, it had to install dozens of new ultra-cold chain freezers to store the doses. Even if the country can quickly mass-produce COVID-19 mRNA vaccines, it may not be able to distribute these widely.

Another weakness in Indonesia’s publicly driven innovation effort is how it has pushed non-state stakeholders aside. Aside from IndoVac, Indonesia had been working on another domestic COVID-19 vaccine using inactivated virus platform technology, the Inavac vaccine — an initiative of the short-lived Ministry of Research and Technology that began at the end of 2020.

Inavac’s development was a race among six domestic academic–business consortiums, each backing different vaccine technologies. Its development was slightly slower than IndoVac’s but showed the capacity for innovation outside the state. Still, the WHO’s advanced mRNA knowledge is held by a state corporation. De-monopolising the state’s hold over this intellectual property would benefit the country, but there is no indication this has been considered.

The development of Indonesia’s two home-grown vaccines highlights the challenges and benefits of connecting to the global innovation landscape. Rather than innovating domestically from scratch, countries can build on global discoveries to shorten the process. But absorbing global knowledge requires understanding the local context in which these innovations, such as vaccines, are deployed.

With substantial vaccine production capacity, Indonesia may be on its way to achieving COVID-19 vaccine self-sufficiency. Its journey to self-sufficiency can be shortened by remaining open to global innovation flows.

Andree Surianta is an Australia Awards PhD Scholar at the Crawford School of Public Policy, The Australian National University, and an Associate Researcher at the Centre for Indonesian Policy Studies (CIPS), Jakarta.