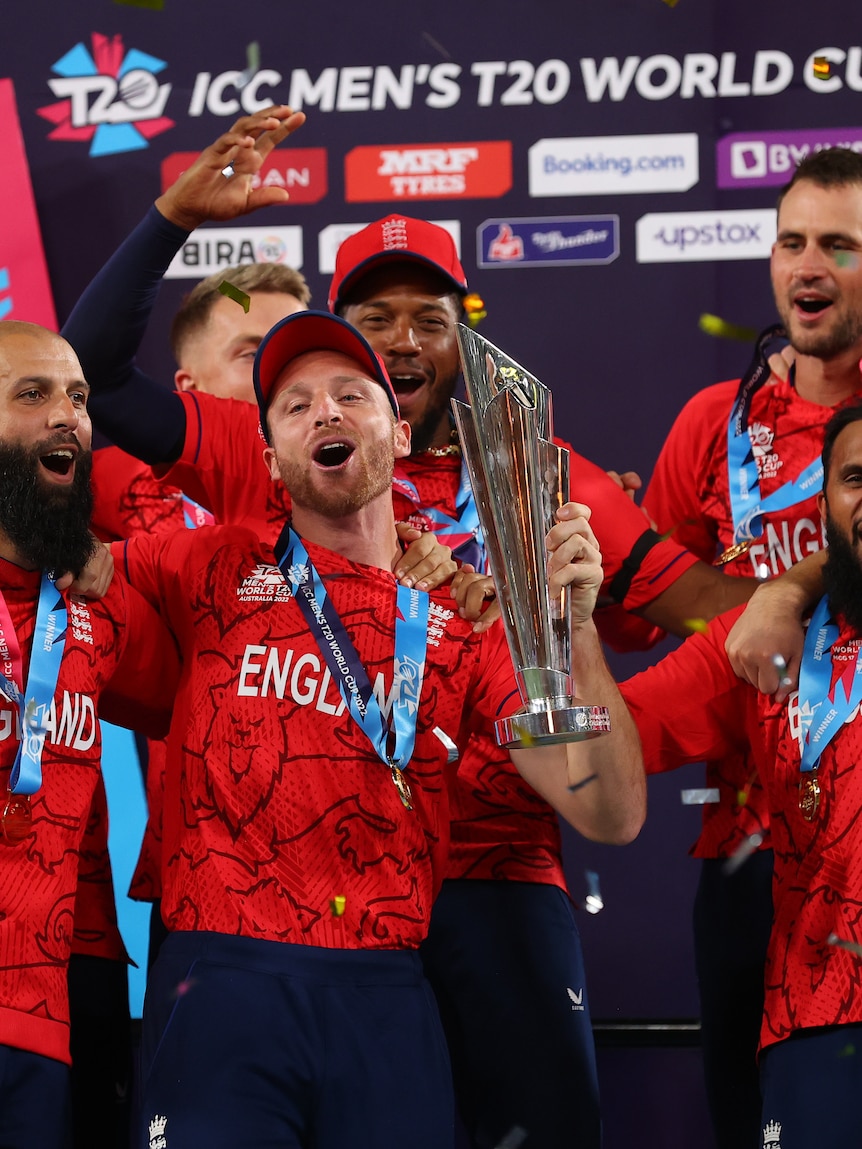 Look away Australia fans, for England are the best white ball team in the world.

Or rather, look closer. Because just as Australia dominated the game through the 90’s and into the 2000’s with four World Cups in six, England are now the benchmark.

Just five years ago to make such a suggestion would have been fanciful at best.

Yet now there can be no argument.

Even if the final was not England’s best performance of the tournament — that honour should be reserved for the extraordinary takedown of India in the semifinal — it was still good enough to quell the best T20 bowling attack in the world sufficiently to win with an entire over to spare.

They did so with a lengthy injury list too: Dawid Malan, Mark Wood, Jonny Bairstow, Reece Topley and Jofra Archer were all missing.

After missing out on the opportunity last year in the UAE … England have become the first and only men’s team to simultaneously hold the 20-over and 50-over World Cups in the 15 years the two competitions have co-existed for.

They are only the second team to win two Men’s T20 World Cups too, after the West Indies — a team whose second title delayed the coronation of this England’s rise to the top of the white ball game.

Yet for almost two decades since England last met Pakistan in a World Cup final — coincidentally also at the MCG — through to 2015, England were largely considered to be a limited overs laughing stock.

Aside from a remarkable T20 World Cup triumph in 2010 — England regularly faltered badly in major tournaments: The dishonour roll reads like a sporting horror story.

In the 2011 World Cup, England were hammered by Sri Lanka to the tune of 9 wickets in the quarterfinals.

In the 2012, T20 World Cup, England beat only Afghanistan and New Zealand, failing to get past the second group phase while trying to defend their title.

The following tournament two years later saw England humiliated by The Netherlands in Chittagong, failing once again to get past the second group stage.

Then in 2015, the last time the Cricket World Cup was held on Australia’s shores. England had a disastrous tournament, failing to get out of their seven-team group, where the top four qualified for the quarterfinals.

In 2015 though, with a home World Cup on the horizon and a hierarchy desperate not to be humiliated on home soil, changes were made.

Strauss wanted to prioritise the white ball team and gave Morgan and Bayliss the resources to do so — namely making the top players available for white ball cricket to the occasional detriment of the Test team.

“It has been a long journey,” Jos Buttler said after the match.

“There have been a few changes to how we have played over the years and we are reaping the rewards from that.”

The aim was always the 2019 Cricket World Cup to be played at home and the resounding success of that team in winning that tournament is what helped spark England’s backfiring limited overs side back into gear.

English white ball cricket was fashionable again thanks to an Irishman and an Aussie.

Since 2016, England have reached the final in three of the four World Cups that have been played, reaching the semifinal in the other.

Only New Zealand with three finals appearances and two finals including 2015, can match that level of consistent tournament brilliance.

Such is the ephemeral nature of T20 cricket, wildly fluctuating results are to be expected  — England’s defeat against Ireland in this tournament a case in point.

Indeed, at the start of this year, England lost a five-match series in the West Indies and consecutive home series against India and South Africa 2-1.

In fact, some were writing England’s white ball obituary to coincide with the retirement of Morgan and the ill-fated appointment of Chris Silverwood as multi-format coach.

After the nadir of England’s catastrophic Ashes series and the calamitous follow up display in the West Indies earlier this year, more significant change occurred.

For years white ball specialists had been on separate contracts to their Test counterparts, ensuring players like Adil Rashid and Moeen Ali remained part of the centrally contracted players without requiring a spot in the Test team.

Now, the coaching staff were separate too.

In stark contrast to the dire weather warnings for Sunday’s final, lightning did in fact strike twice for Mott at the MCG.

Mott’s individual story is unique — in the space of 18 months he’s led two different national teams, women’s and men’s, to T20 World Cup glory, at the same ground, either side of a global pandemic. It’s hard to see that one being repeated any time soon.

Ben Stokes does it again

If Mott’s twin triumph is a case of repeat strikes, Stokes must be living in the middle of a hurricane, such is the frequency at which he finds himself in the key position in major events — England’s 185cm-tall red-headed lightning rod.

But it hasn’t always been to his advantage. In 2016, Stokes was not the hero. Far from it.

Requiring 19 runs from the final over, Carlos Brathwaite unleashed four consecutive sixes off the bowling of Stokes to help the West Indies over the line.

It’s the sort of experience that can break a player for ever.

But much like England rising from the ashes of that 2015 campaign in Australia, Stokes’ path has mirrored that of his nation.

After his much-publicised off-field drama, Stokes was a key player for England come 2019 — his annus mirabilis.

The performances in the Cricket World Cup were followed by a staggeringly good Ashes — including the supernatural events of Headingley.

At the MCG, he did it again — the master of the big occasion.

His unbeaten 52 was streaky in parts — Headingley-like almost, as skied shots fell tantalisingly close to diving fielders and swinging balls flew impossibly close to the outside edge without finding it.

His charmed existence as England’s unshakable talisman is almost storybook in its telling.

When sporting fate bestows that Midas touch upon you, why argue? Just go with the flow and create more history.

“Ben Stokes is the man you want in this situations, he’s a legend,” Mark Wood said.

“Time and time again he is the man for us.”

Yet Stokes will no longer play ODI cricket such are the unrealistic demands on the modern multi-format player.

It suggests the beginning of the end of an era.

Six of the team that played in the 2016 final: Alex Hales — whose own redemption arc is near equal to that of Stokes — Buttler, Stokes, Ali, Chris Jordan and Rashid, played on Sunday night — the core of a side that have conquered all before them.

It’s a fact of life that this squad may have reached the end of its most potent years.

If this is the squad’s final hurrah — and there’s no saying it is — finishing it off with another world title is enough to cement their legacy as one of cricket’s greatest teams.