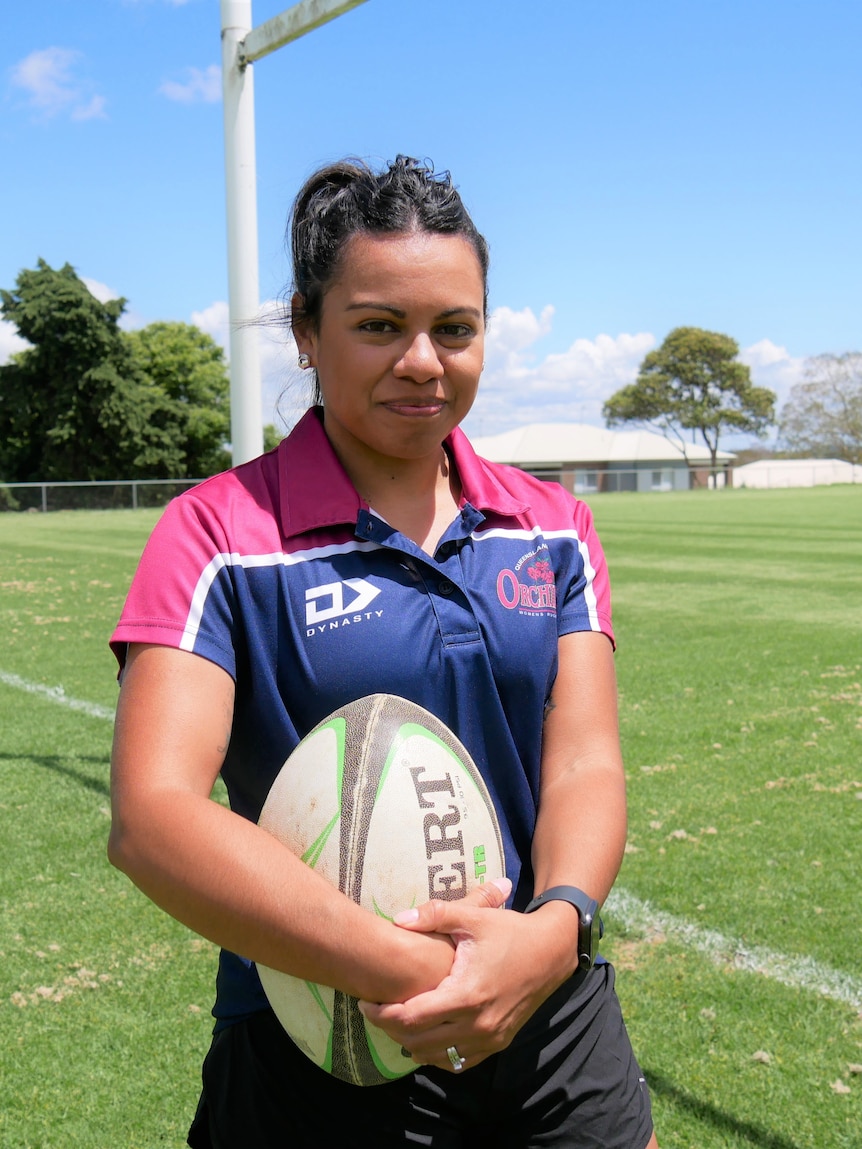 Toowoomba athlete Jade Hubbard has played most football codes, but after one too many head knocks, she has decided enough is enough.

“It’s kind of got me to the point where I am probably going to hang up the boots because of it.”

Being selected in the Queensland Country Orchids XV rugby union team earlier this year was the pinnacle of her career, but it was cut short at a training session.

“I just copped a knee to the head and had this sharp pain. As I got up, I felt dizzy and then I vomited,” she said.

Seven weeks later, she suffered another concussion on the playing field.

“Since then, I’ve kind of just suffered with a lot of migraines, headaches, blurred vision, I’ve had short term memory loss, and focusing has probably been my hardest … even just reading a book has been really hard to do,” she said.

Playing at both amateur and representative levels, Hubbard said the difference in care was stark.

“It’s really scary and there isn’t much awareness about it at all, to be honest,” she said.

“I’ve seen it happen at a club level and you don’t really see people get the support that I did when I was playing representative football.

“You just hear someone’s had a concussion and then that’s the end of it, you don’t actually know the extent of what it can actually do to you.”

When a player shows signs of a concussion or suspected concussion in a rugby union match, a blue card is shown which acts as a cue for the off-field medical process to begin.

Rugby Australia’s Safety Policy states that “the primary consideration in all participation decisions, must be the safety of all participants as a requirement that overrides all others.”

Research shows amateur as well as professional players are at risk of brain injury.

A paper published in Medical Journal of Australia in 2021 found eight out of 11 ex-professional players’ brains suffered chronic traumatic encephalopathy (CTE) and four out of 10 amateur players also had CTE.

CTE is a degenerative brain condition brought on by repeated head traumas and can only be diagnosed after death.

“It’s not just the concussions, but the lots of impacts that have significant force applied to the brain that don’t leave you with any signs or symptoms, so you keep playing,” Dr Buckland said.

“A keen amateur would be exposed to thousands of these over their playing career.

“It’s these thousands of head impacts, presumably with microscopic damage to the brain, that add up to give this degenerative disease called CTE later in life.”

Pat Johnson has seen a lot in his 30 years as a sports trainer in regional Queensland, from the brutality of past rugby league games to the fierce women’s competition.

“It’s not a pretty sight and it’s not good talking to someone and they can’t answer you,” Johnson said.

“They’re knocked unconscious that bad they can’t even move their eyebrows or eyelashes or anything.”

The game has come a long way from the days of letting players return to the field soon after a concussion, and Johnson said local trainers had a huge responsibility to keep injured players off the field.

In community rugby league, adult players must stand down for 11 days after a head knock, while children stay on the sidelines for 14 days, both subject to a doctor’s clearance.

What makes Johnson frustrated, however, is the pushback he gets from parents at a grassroots level.

“I have a lot of parents argue with me [when I keep their kid off the field], ‘There’s nothing wrong with him, he’s got to go back on’,” he said.

“It’ll always happen, I feel, unless we educate the parents better.

“I’m a little worried for the game, the many years I’ve been in it … to see which way we’re going, you know, it’s scary.”

For players from the 1970s era, like Peter Connell, head knocks came with the territory.

“Mad Dog”, as his teammates called him, was a tough competitor for the Oakey Bears, Toowoomba Clydesdales and eventually, the Queensland team.

Now 77, Connell admits he had no respect for opponents’ bodies, or his own for that matter.

“I had plenty of [concussions], nothing really concerned me anyway,” he said.

“I wouldn’t change anything at all, it’s all in the past, it’s all said and done.”

Local news direct to your inbox

ABC Southern Qld will deliver a wrap of the week’s news, stories and photos every Wednesday. Sign up here