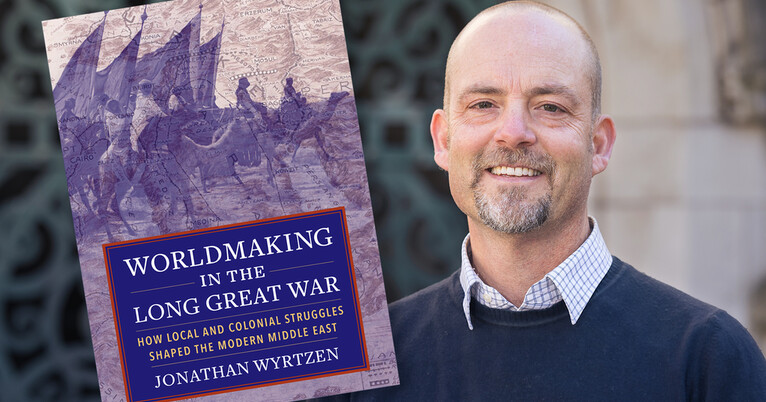 As the standard narrative goes, the tensions and conflicts that have afflicted the Middle East over the past century originate with the arbitrary redrawing of the region’s map by the British and French after the Ottoman Empire collapsed during World War I.

In his latest book, “Worldmaking in the Long Great War: How Local and Colonial Struggles Shaped the Modern Middle East” (Columbia University Press), Yale sociologist and historian Jonathan Wyrtzen offers a new and nuanced version of events that centers the actions of people in the region who resisted the colonial powers and attempted to establish a political order of their own.

Wyrtzen, an associate professor of sociology and history in Yale’s Faculty of Arts and Sciences, recently spoke to Yale News about his book and how events of a century ago continue to shape the Middle East. The interview is edited and condensed.

You argue that the notion that much of what happens in the modern Middle East is solely the result of colonial powers imposing borders on the region is a myth. What is the reality?

Jonathan Wyrtzen: The modern Middle East developed as the result of interaction and conflict among multiple visions of the future pursued by both the colonial powers and locally on the ground. World War I and the fall of the Ottoman Empire made these visions thinkable: The colonial powers were thinking about how to maximize their power and influence in the region, and the communities in the region began mobilizing to fill the void left by the empire’s collapse.

[T]he myth that all conflict in the region originates with these boundary lines endures, and I think that comes at a cost.

After the war in Europe ended, warfare in the former Ottoman Empire continued over these contending visions put forward by the colonial powers and local communities into the early 1930s, which is the period I refer to as “The Long Great War” in the book’s title. This extended conflict produces a Middle East with winners and losers among the colonial powers and the local communities.

The two victorious cases that fall outside the popular narrative are the Republic of Turkey and the Kingdom of Saudi Arabia. They remain regional powers to the present day, and the British and French did not create them by any stretch of the imagination. In fact, they succeeded in large respects against the wishes of the colonial powers.

The book centers the agency of local groups in shaping the modern Middle East. Some efforts, like in Saudi Arabia, were successful. Others were not. What is an example of a local effort to remake the region that failed but still resonates?

Wyrtzen: There’s an amazing book called “How the West Stole Democracy from the Arabs” by Elizabeth Thompson that describes a constitutional convention held in Damascus in 1920 that was composed of delegates — all men — from Syria, Jordan, Lebanon, and Palestine. They hammer out a compromise among the different groups represented, forging a pluralistic constitutional monarchy. They declare independence and name Faisal, who had partnered with T.E. Lawrence during the Arab Revolt during World War I, king of this nascent Arab Kingdom. That summer, the French sent an army into the kingdom and defeated it. Faisal was forced to flee from Syria to British-mandated Palestine.

The legacy of the resistance encountered by the British and the French continues to shape the region. Since the Arab uprising in 2011, we’ve seen the reemergence of fracture points in places where people have pushed to achieve a new post-Ottoman identity that had been suppressed by the British, the French, and, in some cases, by the Turks. The Kurds are at the nexus of this reemergence as they continue to fight for their own nation state. There is the ongoing civil war in Syria. That’s a country where various groups were vying for power during the 1920s. Of course, the Israel-Palestine issue remains unresolved. The situation in Libya, which I trace in the book, remains unresolved.

These are echoes of conflicts from a century ago that are resonating again in the present. It shows that the situation in the Middle East is the result of local interactions and conflicts, not Western diplomats sitting in Paris and drawing lines on a map.

Why is the myth of the Great Powers redrawing the map so enduring?

Wyrtzen: It’s very intuitive. There are obvious good guys and bad guys. It’s not just people living outside the region who hold this belief. It’s a very strong self-understanding among people living in the Middle East. There’s a very clear sequence of events that seems to support it.

You have the 1916 Sykes-Picot Agreement, in which the British and French laid out colonial spheres of influence in the former Ottoman Empire. Then there is the 1917 Balfour Declaration, in which the British promised Jewish people a homeland and state in Palestine. The 1920 Treaty of Sèvres, signed between the Allies and the Ottoman Empire, provided the British and French with mandates that closely resembled those laid out in the Sykes-Picot Agreement and Balfour Declaration.

But the boundary lines that emerged from the Treaty of Sèvres did not match reality. For example, the treaty divided Anatolia, most of present-day Turkey, among the British, French, Greeks, and Italians. Two years later, they lost all of it. A new agreement, the Treaty of Lausanne, recognizes the Republic of Turkey.

But the myth that all conflict in the region originates with these boundary lines endures, and I think that comes at a cost.

What is the cost?

Wyrtzen: One cost is it creates a false presumption that the world works a certain way, which leads to harmful blunders. We’ve seen this over the past 20 years in the wake of the U.S. invasions of Afghanistan and Iraq. Advocates for those wars believed that a great power like the United States could create a democratic Iraq or conduct a successful nation-building project in Afghanistan.

There is just so much evidence demonstrating that this isn’t the case and that the people who live in these places are an extremely important part of the equation. Look at Afghanistan, where there was such a gulf between the relative power of the United States and the Taliban. After 20 years, it’s the Taliban that has reemerged and retaken power. The situation in Syria right now is caused by a complex series of interactions. Neither Russia nor the United States, nor even the Assad regime, can just dictate reality there.

Does the revised narrative let the British and French off the hook?

Wyrtzen: Not at all. They contributed a lot to the region’s trajectory, but the problem doesn’t come down to them unilaterally drawing borders. Their actions interrupted processes of state formation and democratic representation. They turbocharged ethnic and sectarian differences and used them to strengthen their influence. And they left a legacy of divide and rule through an authoritarian security state as the people in the region moved toward independence in the mid-20th century.

In the wake of 9/11, people raised questions about whether the Middle East is compatible with democracy. That question doesn’t account for the brutal suppression by the British and French of natural democratic processes — including those that formed the Arab Kingdom of Syria — that existed among local groups in the region. But it’s a nuanced story. Turkey, which becomes the region’s posterchild for self-determination, is a Turkish ethno-national state that opposes any Kurdish recognition and perpetrated the Armenian genocide. The other posterchild, Saudi Arabia, is an oppressive monarchy. My book doesn’t argue that things would be great if only X event hadn’t happened. Things are not black and white. It’s tough to tell a story in shades of gray, but that’s the reality in the Middle East.