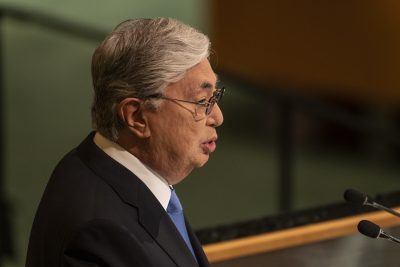 In response to anti-government protests that broke out in Kazakhstan in January 2022, Kazakhstan President Kassym-Jomart Tokayev has called for reforms that might significantly change the country’s political landscape. Tokayev signed a decree on constitutional amendments on 17 September that limits presidential tenure to a single seven-year term and called for snap elections to be held on 20 November.

In September, Tokayev instructed his officials to prepare a new reform package that further ‘decentralises and distributes’ power between the government, ministries and regional heads (akimats). It envisages a mixed electoral system, simplified party registration procedures and increased regional independence. Tokayev has initiated the democratic process of expanding the powers of parliament while limiting the powers of the president.

But it would be wrong to believe that Tokayev intends to completely democratise this Central Asian country, ruled for many years by the authoritarian leader Nursultan Nazarbayev. Although Tokayev is not a typical political figure, he has been part of Kazakhstan’s establishment since the dissolution of the Soviet Union and is more typical of a Soviet cadre than a pioneer of democratisation.

It is naive to expect a man who has spent most of his professional life operating in authoritarian regimes to radically reform Kazakhstan’s political system. While he is very well educated, Tokayev represents the Kazakh elite, who prefer a reliable personality with great authority. Clan relations and respect for authority are very much rooted in this Central Asian country.

Tokayev’s calls for reform and an early election suggest that he is, first and foremost, trying to consolidate power and restore stability after the massive anti-government protests in January. The riots led to the deepest political crisis in the country and the deployment of Collective Security Treaty Organisation (CSTO) troops.

If his plan to consolidate power succeeds, it will bring an end to the biggest political crisis Kazakhstan has faced in its 30 years of independence. Shortly after the withdrawal of CSTO troops from Kazakhstan, the President promised a thorough investigation into the forces behind the January protests and a response to the major challenges that Kazakhstan faces. The investigation is ongoing, but Nazarbayev allies are losing power as Tokayev rushes to blame the old regime.

These political and economic reforms send a positive signal to foreign investors. But to fully repair Kazakhstan’s image and economic growth, Astana needs to pursue a balanced foreign policy and increase economic cooperation with the West and East.

Tokayev is expected to pursue independent foreign policy, as he is not limited by ‘patronage’ relations with Moscow like his predecessor Nazarbayev. At the 25th Saint Petersburg Economic Forum on 17 June 2022, Tokayev emphasised that Kazakhstan will not recognise the Donetsk and Lugansk People’s Republics as independent states.

Since the beginning of the Ukraine war, Russia has tried, with limited success, to push Kazakhstan into military and technological cooperation. President Tokayev has not backed Moscow’s military campaign in Ukraine and said in an interview with a Russian TV channel in June that Kazakhstan would not assist Russia in circumventing sanctions.

Kazakhstan will instead bet on closer cooperation with the United States and China. The United States is one of the largest investors in the Kazakh economy, with a direct investment inflow of about US$1.9 billion in the first quarter of 2022 — nearly twice as much as the same period in 2021.

China is also very active in Kazakhstan. It is no coincidence that Kazakhstan was the first country that Chinese President Xi Jinping, who had not left China for more than two years, visited ahead of his attendance at the Shanghai Cooperation Organisation’s summit in Samarkand.

Xi’s visit showed that China attaches great importance to strengthening relations with Kazakhstan. China has invested around US$20 billion into the Kazakh economy since 1991, reflecting its position among the top five foreign investors in Kazakhstan. Investments from China and the United States will provide a solid foundation for further economic development.

There is hope among Kazakhs that the reforms will continue after Tokayev is re-elected at the next presidential election. Tokayev is aware that providing economic security will help him consolidate power. That thinking was evident in Tokayev’s September 2022 promise to raise the minimum wage by 17 per cent and pensions by 27 per cent.

But reform progress is still insufficient, especially concerning presidential elections. The current law requires a presidential candidate to have served as a civil servant for the last five years and to have lived in Kazakhstan for 15 years. These requirements exclude civilian candidates and opposition leaders who have fled Kazakhstan.

Another area in need of reform is the country’s business environment. Doing business in Kazakhstan usually means dealing with local companies, most of which are connected to the family of the country’s previous leadership. Rampant corruption, social inequality and a complex web of power brokers have long prevented foreign corporations from investing heavily in Kazakhstan. Tokayev must address this issue if he is serious about reforming and developing Kazakhstan.

Marian Seliga is a China expert currently working as Head of the China desk at Czech J&T Bank.