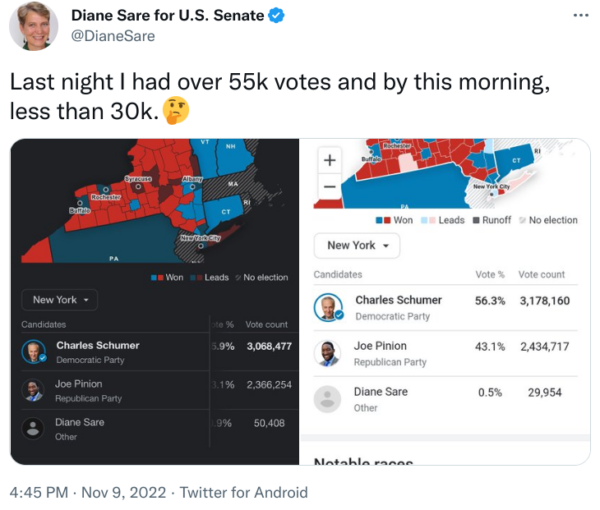 Serious irregularities are continuing to plague America’s midterm elections, on what has now become day 3 of vote counting, and as the American people still wait to learn many of the most consequential results.

Voters in states like Arizona and Nevada are still awaiting massive swaths of the midterm election vote count, in races where America First GOP nominees are looking to expel high-level Democrats from office. Among those on the ballot is Katie Hobbs, the Arizona Secretary of State at the center of 2020’s mayhem who now wants to be Governor.

Much like in 2020, Arizona’s 2022 contest has been marred by voting machine meltdowns, with numerous bullies employed as poll workers who told game day voters to get lost and even to stop recording the failures of the state’s election systems.

While the eyes of the nation have been on the pivotal border state, as well as drawn-out races in Nevada and Georgia, severe election irregularities and delayed results have struck elsewhere, and everyone from corporate media to Big Tech is working to keep Americans in the dark about it.

In New York’s U.S. Senate race, where wildly unpopular Democrat Chuck Schumer has once again been declared the winner by a healthy margin, Independent candidate Diane Sare has actually seen votes added to her column, and then disappear.

When Sare went to bed on election night, she had over 50,000 votes.

In a censored video posted to Twitter, after results were held back all evening, a voter demonstrates how multiple counties, regardless of their populations, reported the exact same vote totals in New York’s gubernatorial race between Democrat Kathy Hochul and Republican Lee Zeldin.

The race between Hochul and Zeldin was perhaps the most watched contest in the nation for the office of Governor, and Republican Zeldin was performing so well in the run-up to Election Day that Democrats were calling Hochul the underdog.

As Americans have raised questions surrounding the security and legality of the 2022 midterm elections, Twitter has fought back with even more censorship than most of the platform’s users are accustomed to.

On numerous election integrity posts, including the aforementioned video detailing identical results in New York, Twitter has added a disclaimed that declares the post “misleading,” before claiming that “experts” have determined “elections in the US are safe and secure.”

“This Tweet can’t be replied to, shared or liked,” the censorship disclaimer goes on to say.