Why this Australian star wept during the New Zealand national anthem 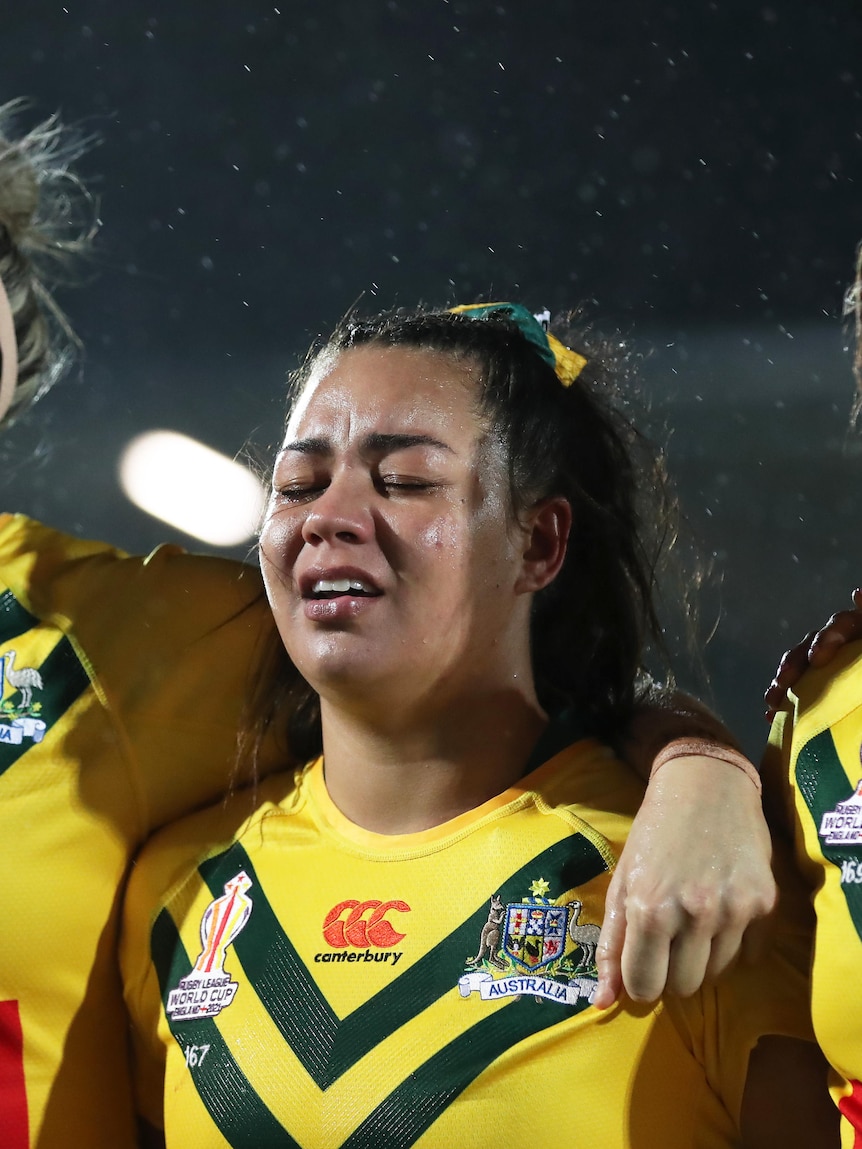 There are a lot of ways to face a haka, and Jillaroos prop Kennedy Cherrington knew that better than most as she wiped the tears from her eyes and stared New Zealand down.

The star Parramatta forward is equally proud of her Australian and Māori backgrounds, so much so she sang and wept during both anthems when Australia met New Zealand in the group stages of the Rugby League World Cup last week.

Cherrington might have chosen the green and gold jersey over the black and white, but that does not change the way she feels about her Māori heritage.

With a foot on both sides of the World Cup final, Cherrington is proof that no person is ever any one thing and, as the two sides prepare to face each other at Old Trafford, she is prepared to wear her heart and her cultures on her sleeve once more.

“It was really emotional, especially facing the haka. Shannon [Mato] and I stood side-by-side and made sure we had each other, being the only two Māori in the team,” Cherrington said.

“We sung both anthems and it was emotional for both of them, we’re part of both countries and it’s hard to stay on one side.

“When it comes to the anthem and the haka, that’s our culture too and we’re very proud, but our allegiance lies with Australia.

“It was very emotional and I’m sure it’ll be the same during the final. I’m just so honoured to be a part of this campaign.”

As a two-time Māori All Stars representative, Cherrington took the initiative in the lead-up to the first match against New Zealand and urged her teammates not to back down when faced with the Kiwi Ferns haka in order to set the tone for the game to come, which the Jillaroos won 10-8.

The bustling forward will take a similar attitude into the rematch as Australia look to claim a third successive World Cup.

“So we take that personally, we take war to them, that’s why I gee’d up the girls. We want to take it to them, not let them take it to us.”

Australia enter the match as strong favourites but New Zealand are more than capable of springing the upset, especially given the form of bullocking second-rower Amber Hall.

The Broncos forward has been unstoppable at times through the tournament and was player of the match in the last meeting with the Jillaroos despite being on the losing side.

Shutting down Hall and newly crowned Golden Boot winner Raecene McGregor will be among Australia’s top priorities for the final.

“Amber Hall was dangerous down that edge, it’s about how we counteract that and don’t allow her space, and Raecene’s kicking game has been awesome so we need to pressure her,” Cherrington said.

“It’s just those tiny things, we know what we have to do, we’ve spoken about it.

“They threw everything they had at us in that last game and it was awesome, respect to them because it was the best they played in years.”