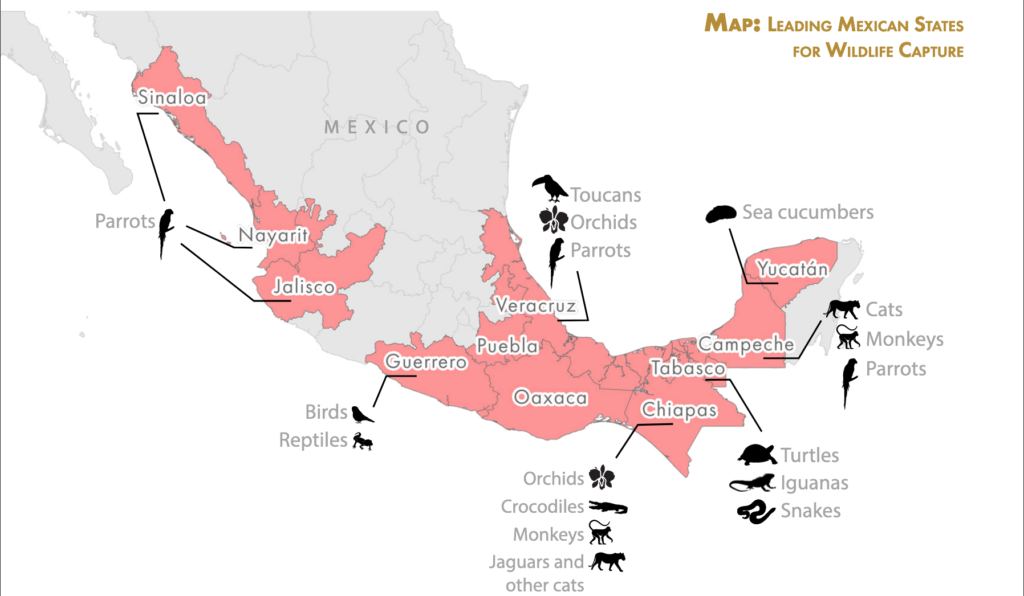 Wildlife traffickers in Mexico are taking advantage of the large-scale, unregulated digital marketplace provided by social media platforms, placing some of Mexico’s endangered species in even greater peril.

While there are physical markets in Mexico that are already known for their trade in exotic animals, the use of social media has triggered an expansion of wildlife trafficking. Vendors are able to earn high profits while running a low risk of punishment when trading online, according to the Center for Biological Diversity, an environmental group.

The Center’s undercover investigation has revealed robust digital trade in animals like keel-billed toucans, howler monkeys, orange-fronted parakeets and sloths — all of which are protected under the Convention on International Trade in Endangered Species. Other animals, including jaguars and sea cucumbers, are also traded openly on social media platforms like Facebook, it found.

The report revealed that many animals are caught in southern Mexican states and along the country’s Pacific Coast, where they are transported mainly on land to major cities like Mexico City, Guadalajara, Monterrey, and Tijuana. And foreign demand continues to be a cause for wildlife trafficking in Mexico. As InSight Crime has reported before, sea cucumbers and totoaba bladders are considered delicacies in China.

To better understand this illicit economy, InSight Crime spoke to Alejandro Olivera, a researcher at the Center for Biological Diversity and one of the authors of the report.

InSight Crime (IC): The report illustrates that wildlife trafficking has increased across Mexico in the last few years. Why has this happened, and what are the root causes?

Alejandro Olivera (AO): Wildlife trafficking has increased mainly due to the use of social networks. The ease of communicating, sending catalogs, asking for photographs, and opening private groups on Facebook, has allowed social networks to become platforms for the sale of exotic animals.

At the same time that wildlife traffickers have increased their use of these platforms, the Federal Attorney for Environmental Protection (Procuraduría Federal de Protección al Ambiente – PROFEPA), the agency in charge of protecting wildlife, has had its resources cut. It no longer has an effective internet research division. This agency used to investigate several physical markets in Mexico City, but all of this was abandoned with the arrival of the current administration, who cut the budget for the entire environmental sector.

IC: Traditionally, Mexico City markets have been at the center of the sale of trafficked wildlife in the country. Has social media completely replaced them?

AO: This is a good question. In fact, the same sellers who sold animals in the markets of Mexico City now offer their wildlife on social networks — social media is used as another sales platform for already established sellers.

One of our researchers arrived at one of the physical markets to investigate sales there. He was offered a catalog on the spot. It was sent to him via WhatsApp, with prices listed. Any animal was available, from an iguana for 200 pesos (around $10) to a Bengal tiger for 200,000 pesos (around $10,200). So, these same traffickers are handling sales both physically in these marketplaces and through social media platforms.

IC: Many people appear interested in buying these illegally trafficked animals, from drug kingpins interested in big cats to Chinese nationals looking for totoaba and other exotic fish for medicinal purposes. Is there an average customer profile for trafficked wildlife?

AO: There are really two types of customers. The more common and average customers are those who want to buy pets at low prices. We are talking about reptiles like snakes and turtles, as well as spiders, plants, and orchids. When flora and fauna are available at such a low cost, these species become affordable and in demand as pets or to be used as decorations.

The second type of customer has greater purchasing power. This is the minority. They might have a private zoo or have many animals in their homes, including big cats or crocodiles. These buyers are looking for rare animals like sloths — not toucans or other birds that are usually low-cost and accessible.

IC:  While the sale of several exotic animals remains regulated in Mexico, most are sold on the black market. Can you explain how some of these illegal animals are “laundered” into the legal animal trade?

AO: Many vendors have a permit from the Environmental Management Unit to sell certain species of animals in Mexico. However, many vendors take advantage of the lack of oversight to sell other species or animals that they are not allowed to, using the same permit.

Other vendors use buy or rent permits on the black market. These vendors often create fake registration numbers and documentation for their animals. And since these vendors are authorized to sell certain species, they introduce other species that are captured and trafficked, claiming were born in the same conditions as the legal animals.

There is no control on the part of the regulatory agencies to authorize each of these permits. The agencies must create annual or semi-annual reports about the animals sold using the permits they have granted. Still, with more than 50,000 permit authorizations made per year, the government is completely overwhelmed and incapable of verifying them all.

We also found that when illegally purchased animals are discovered, they are rarely confiscated because authorities do not have the capacity to house them before their reintroduction back into their natural habitats. When authorities claim to have confiscated this lion or this crocodile, the animal usually stays on the premises where they were found.

IC: Is there anything the Mexican government is doing or should be doing to fight against this increase in wildlife trafficking?

AO: They should resume the operations that were previously carried out in the physical markets of Mexico City, as we know that the vendors there are the same people selling online. But, as we pointed out in the report, it is very difficult for authorities to get close to these sites. In the same way that drug trafficking gangs have look-outs, vendors have so-called “hawks” in the marketplace that tell them when authorities are approaching. Mexico’s Secretariat of Environment and Natural Resources (Secretaría de Medio Ambiente y Recursos Naturales – SEMARNAT) used to have a cybernetic investigative unit that focused on catching illegal wildlife sellers on social networks. But those programs have been abandoned.

Social network companies in Mexico, including WhatsApp, and Meta, the parent company of Facebook and Instagram, need to create stricter regulations that prohibit the sale and purchase of illegally trafficked wildlife. These companies operate in Mexico and must therefore be subject to the country’s rules. They must do a better job of preventing species trafficking.

IC: Are the groups involved in this wildlife trafficking involved in other criminal economies in Mexico? How do these groups operate trafficking networks before the last stage of selling the animals online or in the markets?

AO: We believe so. We have seen seizures of animals and wildlife in which the traffickers use the same modus operandi as they would with trafficking drugs. The totoaba is the most emblematic example of this. We have seen these fish hidden in spare tires of vehicles, attached to the bodies of people crossing borders, and hidden in parcels: the same modus operandi as drug trafficking. There have been several reports of well-known criminal groups involved in this trade, but as with any illegal activity, organized crime will find a way to get involved and try to profit.

*This interview has been edited for length and clarity.