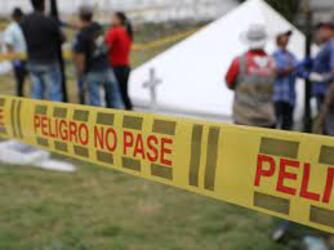 An unending war between feuding guerrilla factions for control of Colombia’s coca-rich southern state of Putumayo continues to claim dozens of lives, with little sign of a strong government response.

Fighting between the Carolina Ramírez Front and the Border Command (Comandos de la Frontera) outside the municipality of Puerto Guzmán killed at least 18 people on November 19, according to a statement by the Ombudsman’s Office on November 21.

Local officials also revealed how the massacre has affected local populations, who have already endured over two years of war between these former cells of the Revolutionary Armed Forces of Colombia (Fuerzas Armadas Revolucionarias de Colombia – FARC).

“More than 15 families were forced to leave the area of the fighting,” Yuri Quintero, spokeswoman for Putumayo’s human rights network, told Radio Nacional.

While the Carolina Ramírez Front and the Border Command share common origins as two former cells of the FARC, they have never been allies since the FARC demobilized in 2016. In Puerto Guzmán alone, fighting between these groups killed six people, and 14 families were displaced, as a result of clashes in January.

Last February, InSight Crime reported on how this civil war is being played out across the state of Putumayo.

The inability of authorities to rein in one of Colombia’s most persistent criminal conflicts is seeing frustration turn to despair.

While Colombia’s Defense Minister Iván Velásquez stated the Colombian army was on the ground in Puerto Guzmán since the violence, there is a feeling this was too little too late.

After the latest massacre, the mayor of Puerto Guzmán pleaded for the government to step in to seek peace between both groups. “For two years, we have lived through this war in our municipality … day by day, this wave of homicides is increasing,” Blu Radio quoted mayor Edison Gerardo Mora as saying.

Some attempts have allegedly been made. In its statement, the Ombudsman’s Office clarified that it had tried various times to persuade both groups to lay down their arms and participate in the “Total Peace” (Paz Total) program put forward by President Gustavo Petro.

The situation may also be evolving. InSight Crime visited the department in March 2022 at a time when violence between the two groups was escalating. At that time, the Border Command had managed to consolidate a dominant presence in the department’s rural areas by establishing alliances with La Constru, a paramilitary faction of the former United Self-Defense Forces of Colombia (Autodefensas Unidas de Colombia – AUC). But the momentum may now have shifted in favor of the Carolina Ramírez Front.

According to representatives of social organizations in Putumayo contacted by InSight Crime, recent military actions carried out by the Carolina Ramírez Front have had a significant impact on the Border Command.

The defiant tone of the Carolina Ramírez Front’s recent pamphlet may be another sign that the situation is turning in their favor.

Their conflict is part of a broader one that has played out across Colombia since the FARC demobilization. The Carolina Ramírez Front is associated with a larger guerrilla faction, led by ex-FARC commander Néstor Gregorio Vera, alias “Iván Mordisco,” while the Border Command is aligned with the Second Marquetalia, a dissident faction led by ex-FARC commander Luciano Marín Arango, alias “Iván Márquez.”

While Mordisco and Márquez are sworn enemies, they have both expressed interest in participating in Petro’s Total Peace plan. This continued fighting in Putumayo would go directly against such pledges.

And the criminal incentives to keep fighting in Putumayo are strong. The department is one of Colombia’s main hubs for coca plantations, while the Putumayo River offers direct access for drug shipments to reach Peru and Brazil, as well as Ecuador.